The missionary Rafaela Robinson is 11 years old and is an archer in Brazil. With only 1.39 meters, everything is taken off. We tell you his story. 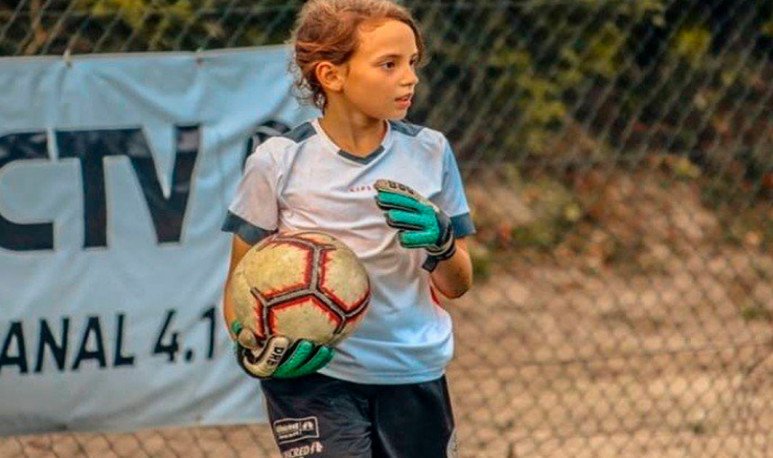 The province of  Misiones  has a long tradition of star archers worldwide. Sergio Romero, or “Romerito”, the guard of the national team, is the most famous of them. Now, a little missionary archer is about to change everything.

In the world of  football  they know her as “Rafiña”. However, unlike the Brazilian footballer, Rafaela Robinson is an archer, and one of the good. Those who know the subject say that  the young apostoleña shines with her reflexes, her technique and her vision of play . At only 11 years old, he has a long future ahead of professional  women's football  . She is a fan of Guild of Porto Alegre and has already been champion with the Paraná Club of Curitiba. She was chosen to represent the girls of southern Brazil in the important competitions of Paris Saint Germain. The team of Neymar Jr., Cavani, Di Maria and Mbappe, among other stars of world football.

So small, dedicated and responsible

Rafaela was born in  Apostles , but has lived since he was 3 months old in the Caribbean country. She is the niece of renowned missionary plastic artist Andrés Paredes. The mother of the star goalkeeper, Valeria Paredes, tells what it means to have a footballer daughter. “First, I did not expect a footballer daughter. We always support her to play sports, but we never thought she would choose football. From there, we can only feel a lot of pride of such a small person, so dedicated and responsible with her activities. On the other hand,  being an  archer  's mom means suffering more than everyone else. Not to mention when the match goes to penalties,” said Valeria .

Rafa's life is many trips with matches and workouts. Despite this, he always manages to fulfill his commitments at school. “Luckily he's doing very well at school. He has an agreement with the teachers who always help him, changing test dates. At the Olympic Center you are required to receive a newsletter from time to time and also provide medical care. Psychologists, nutritionists and physiotherapists accompany her periodically,” added Valeria Paredes.

The birth of a passion

The  missionary girl  carries in her blood a passion for football. “He always accompanied his dad at football matches. Whether to play or to accompany your heart team on the court.  Rafi is a fan of Guild. Ever since she was young, she was always seen with a ball on her feet . But only in 2017 he entered a football school. She was the only girl in the Guild school team for a long time,” said Rafaela's mother proudly.

The apostolic player quickly began to stand out as a great archer. In his first championship he was recognized with two trophies. The “Athlete Highlight” of the competition and the goalkeeper with fewer goals on his fence. In 2019, he participated in the selection of athletes, at the Centro Olímpico de Treinamento e Pesquisa (COTP). The Center is the most important organization for the training of women's  football  players in Latin America. Of 150 athletes from all over Brazil, Rafiña was selected along with 5 other girls. From that day on, Rafaela Robinson's future continued to shine.