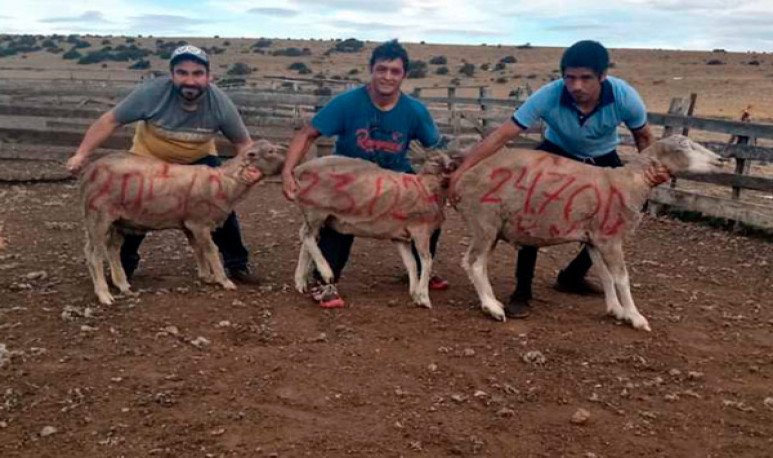 Ernesto Laciar is a 30-year-old born in Mencué, west of the province of  Río Negro  . “Checho”, as everyone knows them, broke a record (also from another countryman of his): he sheared almost 25,000 sheep in the harvest season.

This town of no more than 300 inhabitants already had its own champion: Matias Nuim, from the   rionegrina   town of Los Menucos, had finished the season with 24,509 sheared sheep but Checho, from August to February, made 24,700 shears. His work began in the province of  Buenos Aires , more specifically in   Tres Arroyos   and concluded a few days ago in an Estancia near   Río Gallegos   , capital of the province of  Santa Cruz .

His knowledge of the field came from a young age, as he saw his father  shearing  the chivas and sheep with scissors.   He learned only with time and was articulating his life between the village and the countryside, where he became internalized in different rural jobs. In 2010, when he moved to General Roca, he also ventured into the fruit harvest, but after insisting more than three years he realized that his desire was in the country life and in the shearing groups and his tours through different fields of Patagonia and also in the interior of Buenos Aires.

The shearing groups are  groups of people who go from field to field, from farm to farm, performing these wool and sheep work; they are jobs that must be done very well, so the specialization of of the men and women involved, is essential. In addition they are arduous jobs where you are months away from family, friends and the comfort of your own home, as they constantly “move” in large groups. However, with the pandemic and socio-health care, this year they were working in smaller numbers.

After their work in Tres Arroyos, the comparsa “San Caye”, of which Checho was part, moved more than a thousand kilometers south, touring different estancias and cattle establishments in Santacruceñas.

In August, Laciar joined a “San Caye” comparsa by Ariel Rossi, to go shearing in fields in the province of Buenos Aires. For two months he toured livestock establishments in the Tres Arroyos area and at the end of October, the comparsa moved to Santa Cruz.

The work of Laciar and his colleagues, also from   Rio Negro  , was hard (and is that of all the shearers): work from early, with breaks already delimited for food and daily breaks and necessary. But from 6 in the morning until 19.15, it is a working day, without weekends or holidays; hard work sacrificed and which often is not understood how much effort it represents.

With jobs of two and a quarter, approximately and breaks ranging from half an hour to 45 minutes, the day passes: Checho has come to shear many sheep in previous season but never like the newly finished one: “I never thought I was going to shear 24,700 sheep... it's a lot,” he says. In addition, the foreman of the crew added that “they were 6 shearers and they all performed very well. Checho was not down from 280 to 290 a day. One day he came to shear 306,” he said. His other companions also performed great jobs, achieving 23,000 and more than 20,000 sheared sheep, who “followed” Checho on the podium.

In that sense, the foreman also added that they managed to “shear 130,000 sheep in total, with 1700 sheep daily”; and compared to previous years, where there are more workers, they have managed to make more than 150,000 per harvest.

Congratulations to Checho Laciar and his colleagues for this hard work. Will he break his own record next year?