Home People Stories of people The queen of galaxies is Cordobese

We tell you the story of a powerful, strong and above all intelligent woman, who is today head of laboratory of CONAE in Córdoba. 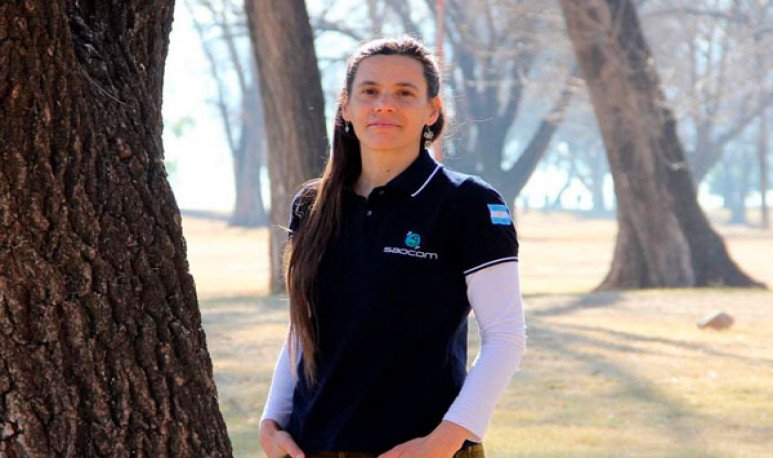 Sabrina Tantera began her professional studies at the Faculty of Exact, Physical and Natural Sciences of the UNC,  and completed them. Her dream as a child was to be an astronaut,  but life gave her new destinies. She is currently  head of the work team of the Laboratory for Integration and Mechanical Testing of New Generation Spacecraft (Veng).  An internationally famous project that is already paying off. Veng is a Cordoba company that plays a key role in the  development and manufacture of the Argentine Microwave Observation Satellite (Saocom),  by the  National Commission for Space Activities (Conae).

But to get to where he is, he had  to face various obstacles  and form himself in various aspects of life.  Sports, music and many other disciplines , invited her to deploy her skills.  From the age of 6  to 18,  he practiced athletics and competed  on several occasions, always dedicating him an important place in his life. Larger, her hobby turned to the  musical side:  the saxophone seduced her with its complexity.  Thus, Sabrina became the woman she is today, of admirable skills and unheard of ability.

Before interfering in the physics world,  at the age of 17, he worked in  Oscar Civarelo.And he learned the secrets of the iron world, preparing car engines to compete in rally. In addition, he learned to manufacture anti-roll cages. He later entered as a driver, in Group N. E integrated technical teams into the Renault formula (cars) and Super Renault. She had a time as a  hockey player  at the Carlos Paz Rugby Club,  practiced pentathlon  and  was a scholarship to train  at the Centro Nacional de Alto Perimento Deportivo (Cenard) in Buenos Aires.  Currently, he uses his free time to teach  yoga classes  for children, adolescents and adults in vulnerable situations and is formed to be  gourmet barista.

“ I studied at Carlos Paz. I did the first at José de San Martín school; I started at the Bernardo D'Elia, but I finished it at the High School of Secondary and Higher Education”,  starts counting from the first years of his life. “ I was' invited 'to leave the parish school of La Quinta neighborhood (alluding to D'Elia). It's just that I didn't get along with religion or with the priest: I lived challenging because he persignated me to the left (he is left-handed from birth) and questioned the dogmas of faith at every time,”  he reveals,  without hitting. And even almost proudly.

She said that her family lived very difficult times and that  she helped in the   Comprehensive Assistance Program of Córdoba (PAICOR)  to eat Creollitos and drink cooked mate. “ My mom was alone at that time and she killed herself working to give us the minimum indispensable. We slept the three brothers in the same room, we did not wear branded clothes or consume what was imposed as fashion a society as' elitist 'as that of Carlos Paz, due to the low family budget.”  In this context, Sabri and his brothers were victims of discrimination in an  unjust and unequal society.

However, she finished her high school and decided  to face university life : a challenge for families in the most vulnerable sectors. That is why today  the victory is triple,  Sabrina overcame  the obstacles of poverty,  was overcome at the  academic level  , and today,  as a woman, she is the leader  in a world historically governed by men:  the world of science and knowledge.

Her time as a student began to take a little more pleasure when she was  a program scholar.  He obtained a rented scholarship from  Lockheed Martin, an American company  that in 1995 received in concession for 25 years the  former Material Area Córdoba (Hoy Fadea).  He pursued his entire career working,  receiving minimum salaries  for internships or scholarships. With that he was satisfied: “With that silver he covered the rent he shared with friends in Cordoba, the expenses of the race, the ferné with the bar of the 'facu' and the food every day; we lived on noodles, rice, prepizzas and cooked mate” , tells the media.

He then went through  AOG, a Cordovan company  dedicated to the  production, repair and sale   of aircraft components.  And, already with various tools from the air world, “w n 2013,  after applying about 500 times, more or less (exaggerates),  I entered the Conae to work especially for Saocom. And here I am...”.

Here she is, Sabrina, leading a project of worldwide relevance, which places Argentina in the ranking of science and knowledge.  Occupying her place as a woman in an area that historically belonged to men. Here it is,  carrying out the head with his forehead high and his ideals to flor de fur.  Here is Sabrina and  we thank you !