Chelo, the dog of a construction worker in General Roca, is a rage for his motorcycle ride. 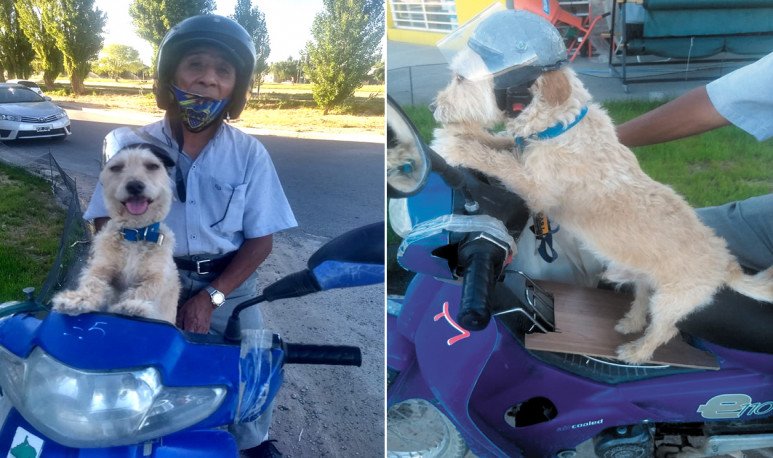 In the south you are accustomed to the great   distances   between one city and another; in the villages it is more customary to walk or move by bike or motorcycle: much more comfortable (and cheap) than an automobile ; vile.

This is not any story: it is that of a dog, who - as a child is learning sound - already recognizes the noise of the motorcycle of its owner, Manuel Ortega and is ready to walk in it; he is  Chelo, the motorcycle  dog  .

This canine came to Manuel's life in July 2017, and today, after three years of life - since he arrived as a puppy - is recognized by all the inhabitants of  General Roca , province of   Rio Negro ;  and recently the nets did their own thing and viralized the great Chelo: above the bike, belly /spine stretched and with a helmet on, because safety is paramount for all occupants.

A year ago, his owner took him out for a walk, but not like any dog: there was no leash, there were no runs; above the bike, and now, it has its own support base on the fuel tank for Chelo to travel comfortable, supported by his hind legs and, as if he were quite a professional driving. oacute; n, with its front legs on the handlebar, next to Manuel's hands. Its accessories are handcrafted: the hull did it with a bounce of the water tank floats, which then lined and painted; in windy and/or cold season, we know that in   Patagonia   both conditions are quite hostile, has a vest, and when the sun is strong in the city, goggles are set. More prepared, impossible!

This dog came to Manuel's life already with some problems: in his first months of life, he visited several times the veterinarian for having a virus, condition that resurfaced him the following year but continues to treat and care, without missing a visit with the professional.

Chelo's routine fits that of his owner: Manuel is a construction worker for almost 70 years, and he worked early, with the blue motorcycle as a unique and therefore main means of transport. Its companion of small size, light cinnamon fur, something wavy, resistant, rough and uniform, is always present and stealing prominence and today is  General Roca's most cancher dog ... Will it be all Rio Negro, or Argentina?

Over the years they have spread very particular pets, because of the actions they carried out, by positions or simply because of how their owners dressed them: digitization and active screens this year gave us  the sheep Oscar, with scarf and field hat  in different actions in a farm with their owners in  Corrientes ; but closer, in Patagonia, have also been protagonists of great animal stories: a dog above the roof of a car strolling through the coastal streets of the city of  Puerto Madryn   and less than a month ago it was viralized as a man of    Comodoro Rivadavia  put some sunglasses on his sheep dog  who was in the back of the van: the wind and the sun, among the “excuses” for the canine to be feel comfortable. Social networks as channels of amplification of the everyday life of peoples.

Just as Chelo the motorcycher must be more history that have not yet reached the eyes and mouth of most people: in a year where we have tired of uncertainties and problems, a laugh and knowing peculiar stories will undoubtedly please us this year: other similar stories?