In the early morning of January 6, the Three Kings lacked time. That's why the Magas Queens from Mendoza gave them a hand with the gifts. 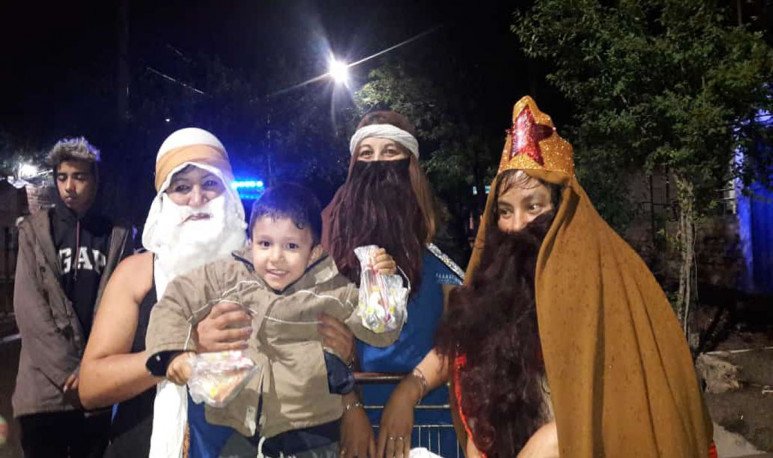 The  Three Kings come from the east, traveling tens of thousands of kilometers on their camels, guided by the star of Bethlehem. That's the official story  they told us about kids. And if we apply it today, it is presumably that the pandemic context has prevented them from meeting in time and way with the delivery of gifts.  We imagine Melchor and Gaspar, delayed by some swab who tested positive, or Baltazar being questioned because of how much migration police crossed, because of their status as a person of color . This is added to the fact that, in more than one country, they will have been questioned by animal exploitation, by using three poor camels as a means of transport, and at such huge distances. And finally,  if they arrived in our country and entered Mendoza, they would not get along very well with the streets of Mendoza,  traveled by  vehicles that do not respect anything , and dealing with more than one a stray dog that would retobish poor animals.

Faced with this situation,  the Three Kings contacted Paola, Romina and Rosa. These are three Mendoza women who, for ten years, provide services, uninterruptedly to the magicians gifts of Bethlehem.  They call themselves the Queen Magas, who, in the early morning of January 6, made more than  400 children happy from one of the most lacking areas  of Mendoza. In the San Martín neighborhood, they distributed treats and toys to boys and girls. This is in addition to his usual activity of helping a local charity picnic.

On this occasion, there were more than 400 boys and girls from the western neighborhood of the City of Mendoza who received the magical and solidarity visit, through the delivery, in hand, of the different gifts. The children and their families managed to forget, at least for a moment, about the adversity that their reality presents to them in Mendoza.

The solidarity of this story have a name and surname. One is  Paola González, 45 years old. He is one of the drivers of this event, which is already a classic Mendoza.  His satisfaction is full by the mere fact of seeing a smile on the faces of the boys. The departure of the three women is expected by adults and children on site, almost as much as the celebrations that are usually organized each Children's Day . In addition, Pao is responsible for the Yo Sí Te Creo picnic, which works at home. In addition, it should be noted that Paola is the mother of one of the many boys who were abused at Próvolo high school.

The  candy bags are armed by the Queens. But toys are the product of the solidarity of the Mendoza, who deliver some items in good condition. The 400 small beneficiaries are added to the 200 who, every day, receive a ration of food in the picnic area of Paola.  Although some were lucky enough to receive both gifts.

The road begins on the night of January 5, the eve of the Three Kings.  Family  and friends accompany them, to deliver the gifts obtained in the hands of boys and girls. Because, in this part of  the world, legend says there were three Magas Queens who hand out the gifts. Although there were years when they ran out of presents after three blocks. It's just that there is no letter or sign here that represents an owner of every gift. Simply, whoever approaches the Magas Queens gets something .

Anyone who wants and can help the three Magas Queens or the picnic area, can contact Paola's phone or write to the mail. You can also approach the picnic Yo Si i believe you.