Home People Stories of people The key to living 100 years

We tell you the story of a Cordovan grandmother who arrived at the age of 100 with a very particular secret. And it's going for many more! 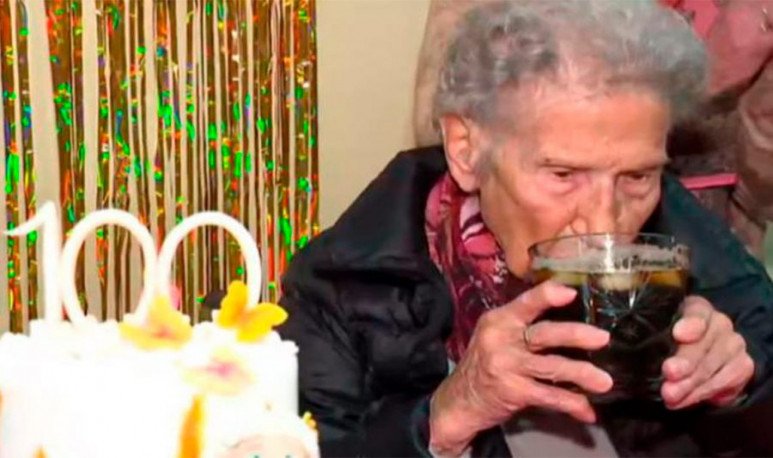 This is  the story of Elena,  a Cordovan who  reached 100  years of quarantine   . With an excellent state, of lucidity and full energy, he contacted the media  and told his secret.

Elena has three children, seven grandchildren, fourteen great-grandchildren and six great great-grandchildren. A whole battalion of  relatives who take care of her . However, her  birthday  was in quarantine times, and those who do not live with her could not go to visit her. But anyway, they sent him  a lot of love  by different means and in different ways. It is that in times of  COVID-19  there is no other than to   reinvent ourselves  and renew the ways of  affection .  Elena lives in Jorge Newbery neighborhood and celebrated her birthday without family visits.

Living 100 years,  in these times, is a novelty.  That is why different media asked grandmother to reveal her  secret . She spent her 100th birthday with the relatives who live with her and with  a unique and special company: the fernet with coca,  like all good Cordobesa. He revealed what his secret is to live 100 years (and we expect many more). Are you giving yourself an idea what this is?

The magic potion of eternity

This woman, laughing, confessed that her secret to getting in perfect condition to a century of age is to  have a fernecito as an aperitif.  For her, it is  the only key  that is worth and to which she owes her longevity.

So, in addition to being many years,  they are well lived years.  Elena is an example of life, her picardy and sympathy characterize her. Above all, his predisposition to share moments. With the news of her 100th birthday, the media went looking for her and she kindly received them. So he told the entire audience his  magic potion that brings the power of eternity: the  fernet with coca .

“ Sometimes they prepare it and ask me if he's rich. I just try it, I don't take it,”  he says to the media.  “ Since I was a girl, my mom  had that habit , when we lived in the country we sometimes ate too much. And my mom always had a habit of having Fernet Branca kept. He'd give us a little swallow. So that we could do digestion right. And that's where I had the taste.”

His mother was Italian, so the  habit of drinking  this  pure black drink,  and use it  as a digestive.  But Elena is  Cordovan of pure strain.  She lived in Mortaros, performing in different trades and with different businesses with her husband. And, with the passage of time, it was acquiring  the habit of taking fernet with coca or “70/30”,  as we say  in  La Docta .

But quiet, dear reader, be careful to get drunk taking Elena's birthday as an excuse. The  old woman  confessed that it  is not to take a lot, just a little drink  for taste. It only  consumes it by sips and  for digestive purposes .  Knowing the Argentines (and the Cordobeses, above all), Elena's secret would become an everyday custom. But we wouldn't have just a little drink:  we'd make the jar, straight!  So, it's worth the warning.

Besides,  it looks like the fernet worked as a  vaccine .  Since it went through various epidemics, malarias and historical events, without having any health problems. Elena says that while she lived the time of swine flu, avian flu and many other  epidemics , she was never forced to take the care measures she takes now. He thinks this is a very particular case.

This woman celebrated her birthday in full quarantine, with the relatives who live with her and with  all the safety and hygiene measures.  He received the media so he could tell his story. So  he cut  the cake  and took a coke fernetazo .  And he celebrated with  “affection of all children” , as he confesses to be a lover of creatures. That's why she is  a great grandmother  and has a good relationship with her grandchildren, great-grandchildren and great-grandchildren.