A Santafesina family has a capspike five years ago. They wanted to take him away, but the neighbors prevented him. The debate was opened and the experts say. 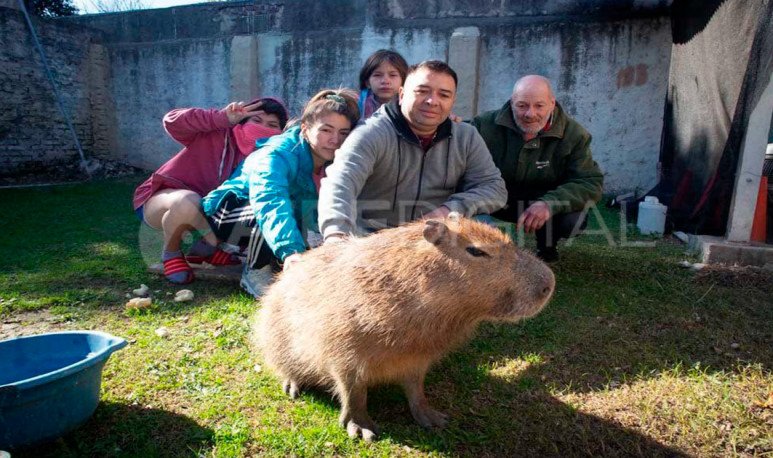 The capspike is a characteristic animal of the  fauna  in Santa Fe. While  not a species suitable for domestic life , it is known that this large rodent is remarkably intelligent and its behavior may be similar to that of dogs. However, it is a protected species and is tried to preserve it in its habitat. That is why it is not allowed to have a capper as a  pet . In this context, a  very particular story arose in a neighborhood in the city of Santa Fe, with a capspike  named Pancho as the protagonist.

In early July, an unexpected situation occurred in the San Martín neighborhood, when members of the  National Gendarmerie arrived at the home of a family that raised the animal as a pet.  The officers were ordered to transfer him to Granja La Esmeralda, but, in front of the crying of an 8-year-old girl who cried without comfort, the neighbors gathered and prevented him from being transferred.

The girl's father told in tears that the capper has lived with them for five years, when someone gave it to her on the island. Pancho  is the pet of the family and is also very loved by the neighbors : he goes out for a walk, sunbathe on the sidewalk, eats grass and throws himself to the ground when they caress him.

The family said that, in addition to the pain caused by the loss of the animal, they were sure that they would not receive good treatment in La Granja, a space that received criticism from organizations  environmentalists.

When the troops wanted to capture him to move him, the neighbors surrounded the cage and prevented it. Eventually, the cops identified the owner of the animal and retired. For now,  Pancho is staying with the family that has been caring for him for five years.

What do the experts say?

In the move, the history of Pancho is a good opportunity to focus on the priority of preserving the fauna of Santa Fe in its natural environment. Given the impact of the case, Manuel Jaramillo, executive director of the  Vida Silvestre Foundation , sent a message to local media stating his position on wild animals that are adopted as pets. The official made it clear that a capsicle can live with humans, but  the important question is whether it should live with humans.  Actually, they are wild species that should not be domesticated and subjected to mascotism.

The drawback that arises in this case is that the capspike can no longer return to its natural  environment  . And they also say that it is true that it would have difficulty adapting to a place like La Granja la Esmeralda. So the convenient thing, indeed, would be not to take it away from this family.But Jaramillo warned that when the capper is a male, it  can be territorial and aggressive.  It is a problem for the capincho to be in the city, because it may have conflicts with  dogs , who can attack him and even kill him.

Other experts recalled that the capture, possession and marketing of wild animals  is illegal and contrary to the wildlife law of  the province of Santa Fe.

Carpinchos are not the only ones that are usually adopted as pets. It has also happened with carayá monkeys and even with puma puppies. “Those who know” agree that it is important to discourage these practices.  This is a situation that is not fair for the animal  and is risky for people. In many of these cases,  catches  are often cruel and the growth of an illegal economy that could be more sustainable.