Home People Stories of people The collector of ancient radios

The collector of ancient radios

Daniel Di Giuseppe has a real museum of ancient radios in his house. Some of them, 90 years old, work perfectly. 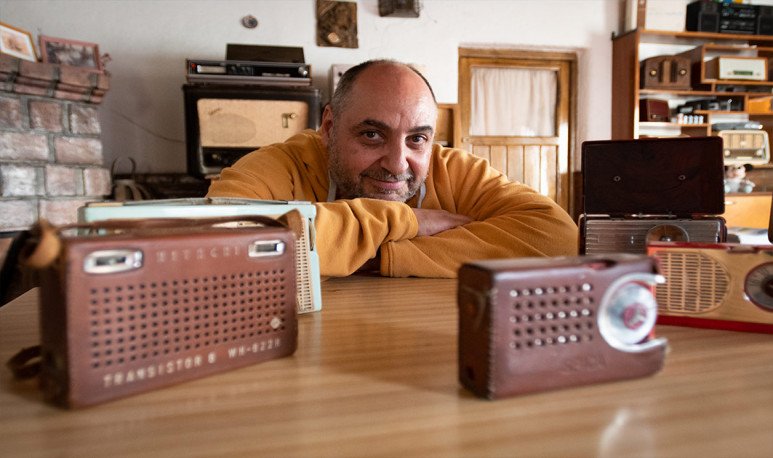 Excellent host. He made a space in his diary and opened the doors of his house for us. The morning cold was eluded the very moment we entered his rustic and picturesque house in the department of Las Heras, in Mendoza.  Coffee, bills and stove  similar household in between, the scene is ready to begin the talk. In a barbecue grill with the family turned into a museum, the journey through history begins.

Daniel Di Giuseppe is a mechanical technician and works manufacturing pumps for  warehouses . However, his passion is another, one he acquired from a very young age. “ My brother studied radio and television when we were about 15 years old . I became interested in his studies, as I did it by correspondence, so I could read the material they sent him.” Daniel knows everything. Dates, places,  band names , broadcasters, radio operas. It's a real pleasure to see you.

Until one day I “became interested in the inside of the  radio  and not just listening to it.” However, that taste and interest were archived for a while. “Many years later,  one day, I was looking for some lamps for the house on the internet and came across an old radio.I started looking and looking, and I found a whole world of old radios .  I participated in an  auction for a radio and I won it with 55 pesos , in 2006.”

The origin of the radios

Daniel recalls that the domestic industry took a little time to activate itself in the manufacture of these artifacts or, at least, of their components. “In Argentina there was never much entry of electronics. Things were done here, but under the license of General Electric, RCA Victor or Phillips.  They all worked under the license of the central houses. For example, I have a Phillips radio that was manufactured here but with all its Dutch components . Then factories were made here and also began to make the components in the country.”

Daniel doesn't just have old radios. He also collects  turntables, combinations, glass-tops, state-of-the-art music equipment, televisions and a huge collection of pasta and vinyl records.He showed us everything, showing his fanaticism for the   Beatles,  Serú Girán  or Frank Sinatra.

“I have, mainly, radios, some turntables, because they were part of the youth of those years, and I also have a vitrola, which is the oldest thing I have.” And, despite the decades that have passed, the  collector  has taken care of keeping everything he keeps alive and running. “ The vast majority work. Although I have a lot of 15 broken radios that I bought very cheap, but I have them stored for when I retire and have more time to fix them .”

Daniel turned on and put into operation almost every radio in his collection. He explained the mechanism of each of them and aroused the astonishment of those present by showing a  portable record player . Finally, of the entire collection, he showed us the oldest: “It's a radius of 1930. But I also have two radios from 1931.” Both artifacts worked perfectly.

So we say goodbye to Di Giuseppe, remembering  Los Locos de la Rota  and admitting that many people tell him to open a museum. But I don't. He's for personal taste. While you don't have any problems displaying your collection, you prefer not to go to the other side and set up as a museum. Sharing the fanaticism over the radio with those who visit him is enough for him.