Home People Stories of people The bulldog of the Witch Verón

A love story that was born by pure chance, but that stole the hearts of all Argentines. We tell you how the Brujita Verón saved Ramón, her Argentine bulldog. 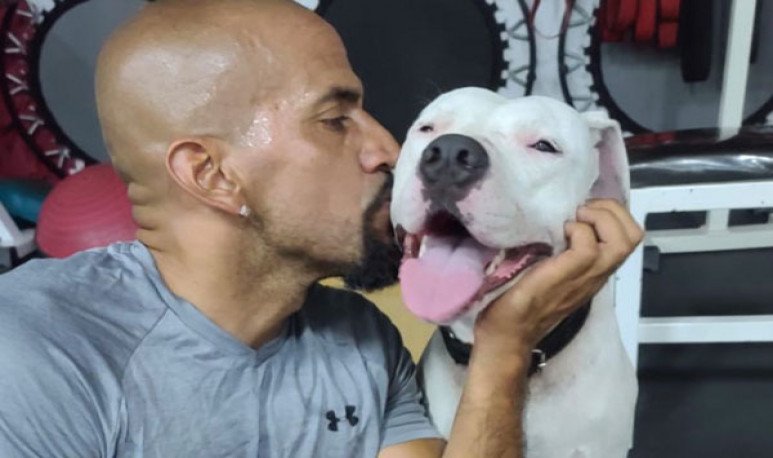 Juan Sebastián Verón is a former mega-known footballer  and loved by the Argentine people. He played as a midfielder and stood out in Estudiantes de La Plata, in addition to the Argentine National Team and  several clubs in Argentina and Europe.  Everyone knows that his nickname is “La Brujita” Verón, but there is something about him that is not known in the media.   And he's  a great dog lover.    With his love of flor de piel ,  an unexpected story arose that fell in love with  all his followers.

The story began on an afternoon when Merlo's neighbors found  an Argentine dogue with signs of ill-treatment and totally malnourished.   As soon as they saw it, they drew an immediate conclusion: “Ramón” (as the Brujita would baptize him later) had been abandoned.  It was a beautiful, giant  dog they  had left tied to a tree in a place far enough to agonize to death.  He was hurt, and everything indicated he'd been beaten . It was a totally daunting picture.

But, with the passage of time, a story of animal abuse would become an unconditional love story.  Ramón's life would take  an unexpected turn  thanks to the neighbors who moved to  heal and care for the dog.

As soon as they found him in  the Parque San Martín neighborhood,  the  bulldog acted aggressively . This was also a sign of having been abused in the past, as they estimate it had passed at least four days without eating. Faced with the situation, the neighbors  sought help . It was Mariela Argüello, a policeman and protectionist from Merlo, who sent the alert to be able  to relocate the Argentine dogue.

The message came to the  Buenos Aires refuge “Zaguates”  and its  founder, Macarena Medina,  instantly knew that he had  to do something to save him : leaving him thrown away was not an option. So they all got down to work and, in a chain of favors and actions for the puppy, they began to  move the chips to change his life.  They immediately started a campaign to help the dog.  From @zaguatesrefugio they started asking their followers  to start spreading  and sharing to find someone who could  do the transfer.   A volunteer went to find him and, to get him in the van, they had to sedate him,  for caution and for his remarkable aggressiveness.

Adopting is to love

Shortly after all this broadcast campaign for the dogue to have a new life,  something unexpected happened.  The campaign reached the  football star and current president of Estudiantes de La Plata, who saw the post and learned about the sad story of the dog. The image of the beaten and abandoned puppy  stayed in his heart and, after reflecting, decided to adopt the pet  and receive it at home. 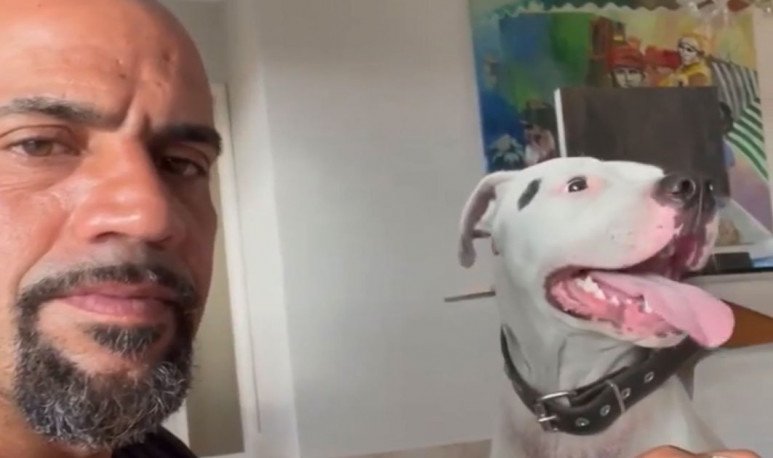 The Brujita contacted Macarena  to take the dog home . At that time,  the dogo was sedated in the veterinarian.  Macarena did not want to leave it in charge of families with children, other pets or inexperienced people with breeds of this type, because it involved a lot of risk to the population. But, as if by magic, Verón met all the conditions.  He no longer lives with his children because they are of age, does not have any other pets and had raised doges on other occasions.  He was the ideal candidate for the abandoned dog in Merlo.

Anyway,  the situation was complicated,  so Macarena and La Bruja had the corresponding talk:  “I got it up the car and I'm taking it to a veterinarian. I have nowhere to leave it later,  and I'm clear you shouldn't be in touch with guys.  He needs someone who knows this breed; he is a very big bulldog and can get to bite.   It can eat you up to your head,”  Zaguates founder sincere with the renowned sportsman. Verón told him that he had experiences with  that breed  and  strongly held his willingness to receive the battered dog.

The meeting with his new owner was magical.  As if they were known from other lives, the dog  suddenly changed his behavior . Macarena told the media about the moment: “When he arrived in the department,  Sebastián received him as if he knew him all his life.    The dog looked like a poodle.   He was a little tired, but soon they went for a walk and the dog  behaved perfectly  on the street.”

The protectionist  left them alone , but not without first advising the player on  basic care . He told him to try to keep a safe distance, not to put him into bed and to mark him in which spaces he can be and where not, at least  until he gets to know him better.

It was La Brujita who baptized him as “Ramón” , with the name that would start a new life of love, care and pampering , unlike the one he had before. The lives of the two changed forever. Today,  the idol of Estudiantes has his social networks full of photos of the dogue . Every new day is  a new story to tell  on Instagram. In addition, Macarena and Verón are still in touch, to do the corresponding follow-up. Although, just watching the former player's networks,  Ramón is known to be in a place full of love.