The “Batman Solidario” every week visits the Niños de La Plata hospital to deliver donations and bring encouragement to patients. 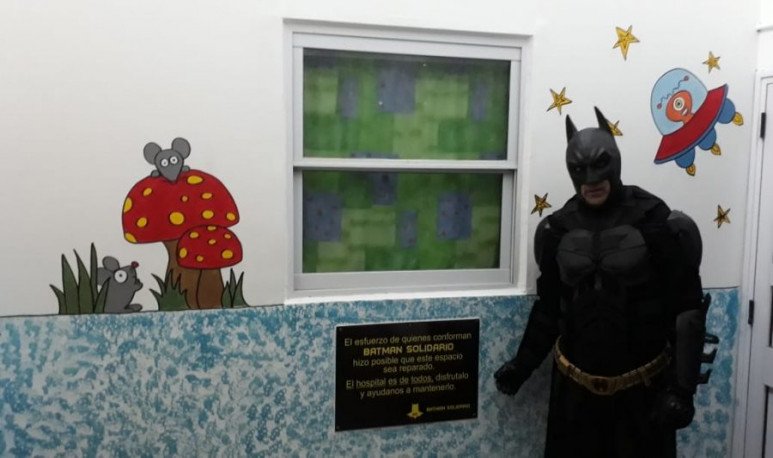 The Batman Solidario visits the Niños de La Plata hospital every week to deliver donations and bring encouragement to patients. It will be distinguished next week by the Deliberating Council of La Plata, parliamentary sources reported.

This man every week wears Batman's suit and moves on his Batmobile. Visit to children in the Platense pediatric hospital every week from 2 April 2013. It was then that the capital of Buenos Aires suffered a flood due to heavy rains, which caused 89 deaths.

The bat hero will be declared as Destacado Neighbor, according to the proposal of radical councilman Guillermo Ronga. He explained that “he is a hero who must be highlighted not only for his solidarity work but even more because he brings a smile to thousands of children and adults.”

“We must all learn from the great work he does daily in the hospital. From that humility of just giving a little of each to the other,” he remarked.

The mayor stressed that “this teacher is the husband and father of a male and two babes. For six years, he climbs on his batmobile, ignites motors and parked in the children's hospital. Loaded with drawings, crayons and treats, walk through the hallways and play with the boys. He does it as a character because he believes that pain is better connected with fantasy and there is a world of fantasies that is generated around the character.”

Batman not only visits sick children weekly. It also summons Batiencuentros where, with the money raised, he subsequently buys supplies or televisions for pediatric rooms. It is sought that these meetings will also be declared of municipal interest.

Second celebration for Panarotti in TCM