Home People Stories of people Thanks to Diego, today my son is alive

That Diego was there at that moment may have been a coincidence, but he had previously prepared himself for such a moment. 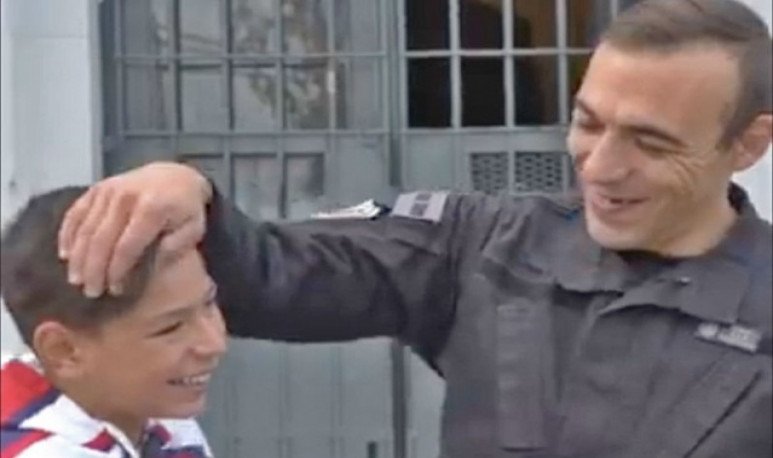 Jagger  is a 13-year-old boy suffering from congenital heart disease. However, that does not prevent him from leading a normal life. One morning,  Jagger  woke up like every day, but after a while he began to feel something was not right. When her mother went to see what was happening to her, what she found scare her: her son was  convulsing  and she couldn't do anything to assist him.

Desperate, she left the house for help and saw  Diego , a prison officer who was working in the neighborhood.  Diego  thought fast and got down to work. After telling the mother to call the  emergency service  immediately, she ran to see  Jagger  . He found him without a pulse and did not hesitate: he performed on him  CPR maneuvers , a technique in which he was trained, but who believed he would never need . The anguish of the moment mutated in hope:  Jagger  began to regain his breath. The bad drink had passed.

“ Thanks to Diego, my son is alive today ,” Jagger 's mom summarizes the experience they had to go through. That Diego was there at that moment may have been a coincidence, but he had previously prepared himself for such a moment. Nice would be if we could all be ready to help each other just like Diego did: a simple gesture that can save a life.

The importance of CPR training

Diego  's case is an example that knowing how to perform CPR maneuvers can change the course of a person's history. Studies have stated that the survival rate of people suffering from  heart  attacks increases considerably if patients receive this aid technique.

CPR involves chest compressions to maintain blood circulation in the brain and other vital organs. It can be combined with ventilations to ensure that blood is properly oxygenated.

Recall that cardiac stops affect people of all ages and are more common than we think, regardless of the health of the population. That is why, in general, CPR certification is required for people engaged in specific jobs such as care institutions for the elderly and children, lifeguards, firefighters and police. However, more than 80 percent of heart attacks occur in homes, as was the case with  Jagger.  It is essential, then, to have knowledge about relief maneuvers even if it is not a work requirement: in emergency circumstances every minute is critical, and gaining time while waiting for the ambulance can make a difference.

Despite its importance, many people lack CPR training and certification. It should be clarified that without effective training on the subject can cause serious injury to the person we try to help, of course, without bad intentions. Proper training gives us the confidence to act and reduces the chance of doing harm.

More dissemination is needed on the importance of knowledge in CPR maneuvers. And what better way to  raise awareness  than to know stories like Jagger and Diego. Welcome is viralization in these cases to spread us and be increasingly prepared to act correctly in the face of emergencies. It does not need miracles, but people with proper training and, above all, with the predisposition to look at the side and not hesitate to help others. If you are one of them, look for information about the registration for the relief maneuvers courses offered by the  Argentine Red Cross , the Government of the City of Buenos Aires, the Ministry of Health of the National and oacute; n, among others.