Life stories of Argentines with results that impacted society from sports to work. 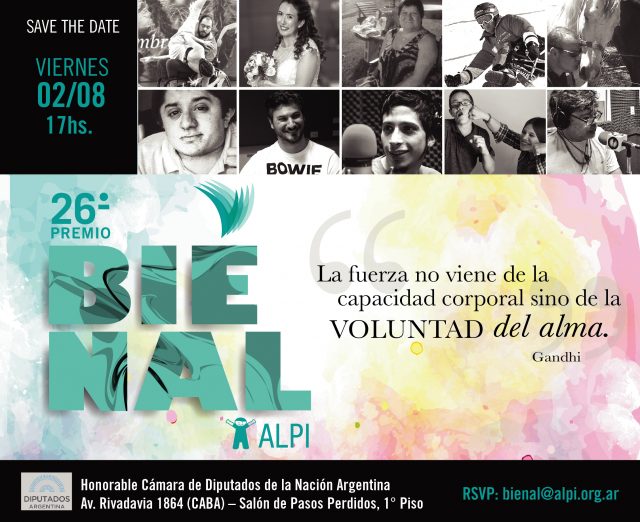 Ten life stories of Argentines who managed to overcome difficulties and physical barriers, with results that impacted society from sports to work, will be awarded by the 2019 Biennial of the civil association ALPI in a ceremony that will take place at the National Congress.

The twin brothers Lautaro Nicolas Roccatagliata and Julieta Roel Raccatagliata, 14 years old, were born with the Flow Regression Syndrome, and since children went through different treatments and surgeries. In 2013 they were part of a project of inclusive places in Morón and then named sponsors of the project, they also hold the “Workshop on the Social Model of Disability” in schools and clubs, and were chosen by Unicef to present one of their conventions.

Francisca Votari, 60, was born with a pathology called double athetosis with dystonic elements, and today is a technique in children and families. It has a disrecording site for university research and medical and teaching conferences.

Leandro Gil, 32, had a subway accident that resulted in the amputation of his arms. Today he lives alone, is Lis's father, conducts three radio programs, is a writer of disability notes at La Nación and a member of the Biblioteca Humana Argentina .

Ivan Maximiliano Place, 51, suffered an accident in his adolescence that affected his spinal cord, and has since been quadriplegic. He rehabilitated at ALPI and began his career to recover: he studied law and computer science, and was a rugby coach.

Ramón Pedro Soques, 41, is a lawyer, provincial official, and collaborates in various legislative projects and social and sports projects. It has spastic quadriplegia as a result of an accident during a rugby match.

Mariano Landa Espora, 36, teaches circus workshops for children with disabilities, dancer and acrobat at at the company of Danzas sans Frontières and computer technician. In addition, he is one of the founders of the Ataxias Association of Argentina (ATAR), a pathology that he was diagnosed when he was 19 years old.

Daniel Salvatierra, 43, is a painter, writer, actor, radio conductor, works at the Military Hospital and collaborates with the Association of Dystrophy. It has a muscular dystrophy that manifests itself in the progressive loss of muscles.

Germán Vega, 45, an accident while skiing in Barilochecaused a spinal cord injury, but that did not prevent him from realizing his dreams and today he is the first wheelchair ski instructor in the country.

Daniela Aza, 38, was born with Congenital Multiple Arthrogryposis (AMC), a pathology that presents joint contractures and affects two or more limbs. After graduating from a bachelor's degree in Communication, she found a space on social networks to spread her condition and talk about disability from a positive side to help other people.

Jeremías Gamarra, 26, was born with Osteogénesis imperfecta, known as “the disease of the crystal bones,” but that never stopped him. In 2012 he started working at Accenture under the program “Without Barriers”, and since joining the company he took courses, gave awareness talks at other companies and recorded videos for TV channels and graphic media.