A Mendoza teacher completely reinvented herself to reach her students during the pandemic. Technology and will, a perfect combo. 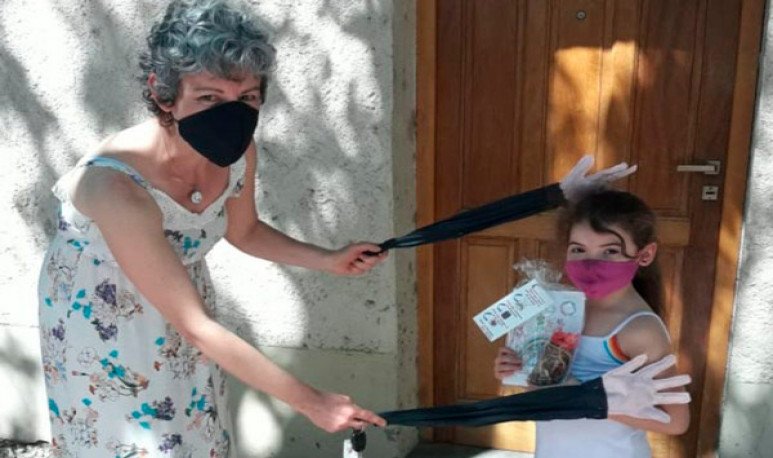 Myriam Arranz is the teacher  of 2° C, afternoon shift, of Manuel Láinez School, Fifth Section, of the capital of Mendoza.  Like teachers in all schools across the country, Mr Myriam had to adapt to the circumstances proposed by the pandemic. To ensure the learning of his students,  he turned to technology, the internet and YouTube.  But, above all, Myriam, turned to his creativity and the desire not to take quarantine as an extensive holiday, filling the books with topics and sending tasks online. No. The Lord Mendoza took her job very seriously and  focused her will on generating learning methods for all her students. Both for those who have connectivity, and for those who don't.

At first, Myriam applied “conventional” methods of distance education. However, he felt very distant with the pupils. Especially when he warned that the pandemic would stay for a long time. So, and helped by her family,  she decided to record a video giving classes, as if she were in front of the classroom. But he found the problem that the material had turned out very long and heavy, so he was advised to upload the video to   YouTube  and let the students see it around. The proposal was a success. He realized that worked for families who had a connection, so he made his own channel, and uploaded all the videos there. In fact, many other teachers used their videos as support for teaching.

Her videos weren't just her talking to camera. But  he showed his histrionic skills and creativity to make teaching a very entertaining element.

But not everything was recorded and fun classes, over the months, the very extensive quarantine began to bring their problems and traumas associated with isolation.  The videos on YouTube had their effect on the didactic, but they fell short from the affective . It was a material posted on the web, available to everyone. That's why  Myriam wanted to do something more personalized and started sending audios or short videos on WhatsApp,  telling them something, proposing a game to his students. The boys went online, dared too, and started sending her videos telling her about their experiences.

The sign also broke with the myth of “ not giving the personal phone to the students' parents .” The situation forced her to do it, and her surprise was pleasant. Parents limited themselves to consulting about their children's  learning  , without atosigating it.

Myriam knew that many guys didn't have the possibility to connect to the internet. That's why he got down to work, and  he went to visit them at his home. He didn't go into their homes, because of the pandemic, but he greeted them at the door, to cheer them up, say “you can,” and that kind of backing.  However, she understood that it was not fair to visit only those who had no connectivity, because there were also a large number of students who had connected and had fulfilled their obligations.

Thus, Myriam  spent litres and litres of fuel, money and time to visit his 27 students, spread throughout Greater Mendoza. It took 4 or 5 hours a day, for several days . Every time he arrived at a house, he would get down with improvised foam rubber arms, held by wooden sticks, to generate distance with the students, but to “embrace” them. He also brought them a copy of the  book   Rainbow de Esperanza , which is a compilation of the fables that his own students have written.

Thus, Myriam showed that what is needed is  vocation . That can be taught in the same way in times of pandemic, as at normal times. It just takes a little willingness and creativity.