Carolina was born and raised in Villa 21-24 in Barracas, but that didn't stop her from fulfilling her dreams. Today full of art the streets of the neighborhood. 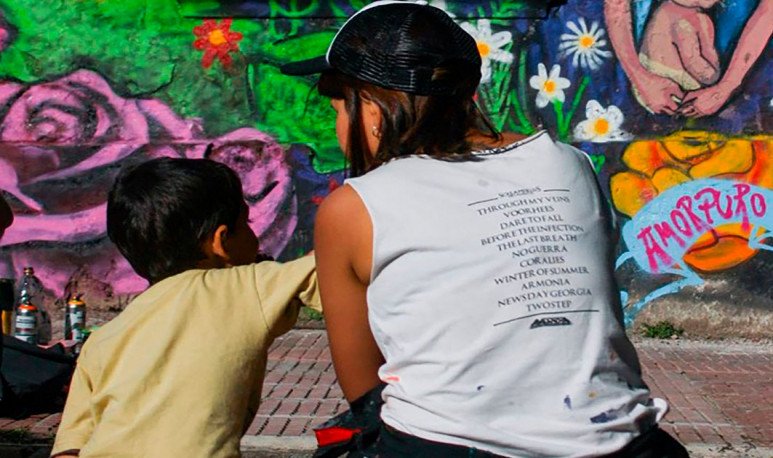 The place where we are born, many times, can limit our opportunities. But, if conviction is strong, it is always possible to fulfill our dreams. This is the story of  Carolina Chorolque , a 29-year-old girl who was born and raised in  Villa 21-24 in Barracas (City of Buenos Aires). Her condition as a villain woman, however, did not prevent her from choosing the career she had always wanted:  Fine Arts . Today fills the houses of his  neighborhood with color and joy.

Since she was a girl, Carolina painted and drew  dreaming  of one day becoming an artist. Over the years, this desire grew, hand in hand with the certainty of the  transformative power  that art could have. His parents, however, saw it impossible for him to live off that given his origin.

But Carolina had things clear and went straight to that: her first paid job was at the Vocational Training Center of a Parish, with a micro-enterprise of religious stamps. She then studied at the  Higher School of Fine Arts  and became a Professor of Visual Arts. He also studied a Bachelor's Degree in Cultural Management at the National University of Avellaneda.

This  artist  never forgot her neighborhood. Today he is part of the teaching staff that provides workshops at the  Casa de la Cultura Popular Villa 21-24 , which constitutes an important engine for the development of the neighborhood cultural identity. It has a theater and cinema room for 200 spectators, three classrooms for cultural and educational activities, and a multimedia area for archiving and documentation.

Color that changes your life

Since 2016, Carolina has been leading the project “  This is my neighborhood, my starting point ” . The intention of the initiative is to bring color to the streets: through  murals , several blocks of the neighborhood intervene. More than 60 houses with Latin American cultural expressions and the most representative figures of the communities have already been intervened.  Color, for her, influences the quality of life of neighbors.

Carolina was able to fulfill her dream: today she has sold more than 15 paintings and sculptures, she was able to leave behind her prejudices and inspire, with her example, other young people who believe that art is not for them. He could have taken some of the gray from his neighborhood and filled that world with colors.