Adrián Rojas is an Argentine chef who lives 10 years ago in Spain. During quarantine, it helps to bring a hot dish to those who do not have to eat.

Solidarity  is a feature that distinguishes Argentines. Maybe we have some bad things (several), but when there is need people always respond. This time, exactly that happened, only that Argentine solidarity impacted   Spain  . Because there are many who migrated there and today do something for the city they chose to live in. This is the story of  Adrián Rojas , a  chef who today cooks for those who need it most.

From one day to the next,   Madrid  's physiognomy  changed. When the world was normal, the  Malasaña  neighborhood was full of bohemian bars and trendy restaurants. It was there that  Adrián Rojas  chose to open his place,   Casa 28   , exactly a year ago. He is a native of Monte Grande (Buenos Aires), but lives in Spain for 10 years, during which he worked in several renowned restaurants.

From one day to the next, we said, everything changed. Where before there were people enjoying and having a good time, today there is silence and loneliness. However, every noon, hundreds of people approach the  Argentine chef  's business for a basic and fundamental reason: they're hungry. Adrián prepares, in the heart of  Madrid , a  popular pot so that those who have no alternative can access a plate of hot food. 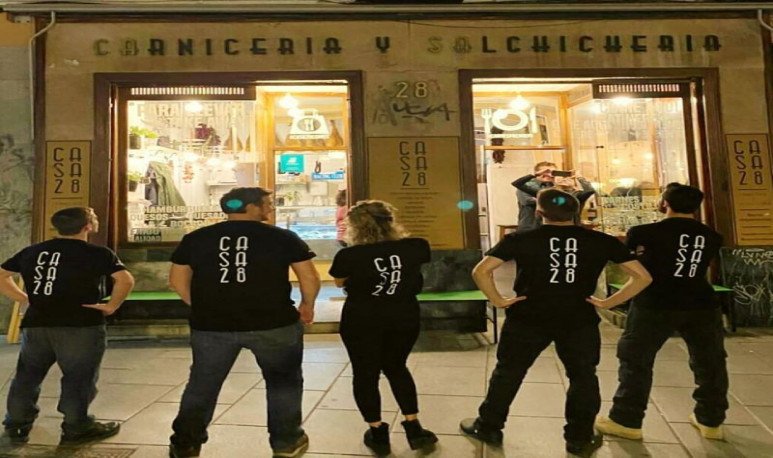 The beginning of the initiative

It all started when the Spanish government ordered  mandatory quarantine  to slow the advance of the  coronavirus  . The first action he had was almost instinctive: since he had thawed food and some perishable food, he left them on the sidewalk next to a sign: “ Take what you want, it's free .”

But one idea was hanging around in her head: what was going to happen to all the people she didn't have to eat, now that nobody could help her. That was how, along with his wife, they decided to inaugurate this  popular pot .

From March 17, he began cooking and did not stop. Fortunately, other neighbors echoed their solidarity gesture and joined:  they donated items for the kitchen, money and food . There is even a child coming up with their tablet so whoever needs it can use the internet and connect with their family.

Adrián Rojas  puts his bit so that we can all get our best out of this crisis, where appropriate, in Spain, one of the countries most affected by the  pandemic   . Sometimes, all it takes is two hands wanting to help. Once the machine is started, it is impossible not to get on the train.