Ricardo's name “Coco” Niz is not known. Anyway, we decided to tell you this story of overcoming, which is worth sharing. 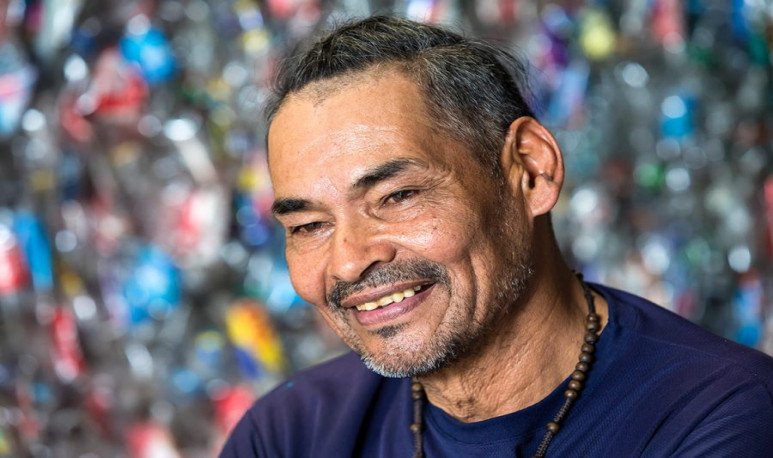 Unfortunately the name Ricardo “Coco” Niz is not well known to Argentines. Therefore, from the pages of Ser Argentino we will try to recompose that error a little.

First of all, what has to be said is that Ricardo is the founder of a cooperative called  “ El roadrunaminos ”  which is based in the Buenos Aires neighborhood of Villa Crespo. The goal is more than clear: the goal is  the collection of  recyclable waste , as well as providing some  social inclusion to its workers. That is, the perfect combination:  care for the  environment , generation of decent sources of work and cleanliness of public space .

In Ricardo's words, the project arose “under a bridge”. Ricardo was 35 years old and  could not read or write . Excited by a teacher who was at the same time a neighbor, she starts school and learns. It is at that time when it proposes to generate  “a social shock” : to move from linyera to taxpayer and worker, taking care of the environment and the quality of life of the Buenos Aires. Over time, and thanks to the support of neighbors at the beginning and companies, schools and universities afterwards, he managed, together with his colleagues, to  produce 20 tons of recyclable waste per month , generating a decent income for each of the  cooperativists .

But every story has a beginning, and Ricardo's is no exception. At first  I was cartoning like one more . His intelligence, bonhomy and curiosity made him read one day, in one of the magazines he was throwing into the bag to be sold as recycled paper, that  someone explained what a cooperative was . He commented it with his neighbors on the bridge and he didn't have much support. But the initiative defines it: he went to the  INAES  (National Institute of Associativism and Social Economy), where they explained to him , now in detail, the steps needed to build a cooperative.

The  solidarity  of the workers of the INAES made him even more excited, but  there were two requirements for the foundation: to finish the course on cooperativism (which, thanks to the fact that we were able to do so.he learned to read and write didn't cost him so much) and convince nine more families to join the  project . This cost him a little more,  but he did it too .

Over time, the same people who used to turn their faces or insulted them for breaking the bags, began to separate what was recyclable:  that is, they managed to change the customs of the neighbors.  At the same time, although the income still did not reach him to stop living under the bridge, he gained the respect and adherence of all.

The signs were very positive, so he scored (along with several colleagues) in a  comprehensive  waste  management course and one on Hygiene and safety, health labor and first aid . At about the same time he set out to leave the car and learn how to drive. Saving for years he finally made it. Nothing stopped him.

Future targets are to produce a thousand tons  (THOUSAND tons!)  by month and thus achieving almost political confirmation that  cooperatives are profitable.  In addition, of course, to shout in our face that it is possible to transform the lack of hope into personal, cultural and social achievements. Thank you very much for everything, Ricardo.  We're indebted to you .

She is trans and got a historic achievement for hockey