Home People Stories of people Operated, without memory and in a pandemic

José Luis Perez went through these three circumstances. However, at 55, he managed to receive himself as a teacher of Language and Literature. Being in a pandemic is no excuse. 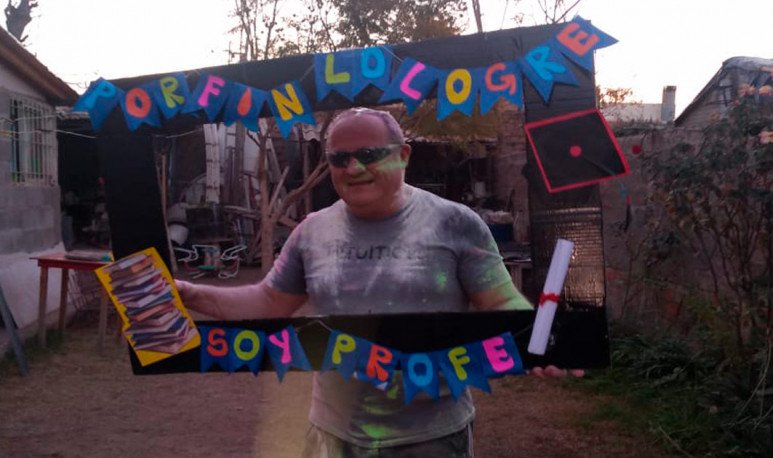 As a good Mendoza, I will quote the lyrics of the song “Eterna Soledad”, by the Enanitos Verdes, and leave the   link  for those who don't know it. In the end, the refrain says, “You have to risk getting up and continuing to fall.”  It could well be a biographical phrase about  José Luis Perez. This 55-year-old Mendoza overcame multiple obstacles that put his life and, after 14 years, managed to receive himself as a  teacher .  He was operated on multiple occasions, had several episodes of  memory  loss and rendered the end in full pandemic.

At the end of secondary school, José Luis raised what is proposed by the common of Argentines. He chose a career and began, however, family needs put him in place. “When you are married and has children, you have to meet the needs of the family.  I received myself in high school and started my career to be a  teacher , at the Magisterium, when it was two years. But, having to work, I had to quit my studies.”

So he started working in a company where he has been more than 30 years today. However, in 2006 he was suggested the idea of re-studying the career he longed for. “ At that time, my 18-year-old daughter wanted to start a career and for me to accompany her.  He looked for something that was accessible to both of us and found this career at the  Tomás Godoy Cruz Institute . In 2006 we both gave up very well to enter.” And, when he says they gave up very well, it's very good: “It was a surprise my place in the order of merits because  I finished number 25 out of 300 enrollers.”

Before he started studying, he began to have some physical problems. “I had several health problems. In 2004  I was cut off a tendon . Then I  fell and my left arm broke.  And in 2005  I had surgery on my shoulder  . But, in 2006, I was presented with the opportunity to study, as I thought I could get kicked out of the  company  where I worked, so I had a tool to move forward and rdquo, explains José Luis about his decision to resume the books.

“In 2007 I went back to  an operation to get my screws removed. And later I had drawbacks  in the Achilles tendon on my right leg . Again, I got surgery. And in the recovery  my wound was infected, I almost cut my leg,” says  the professor who, at that height, it seemed impossible to imagine what, later, he achieved.

But, to all the vicissitudes that had been presented to him, something totally unpredictable was added. “At the end of  2007 I started with memory problems . The  doctors  told me it had to do with food and the  level of triglycerides.  That generated memory losses and violent episodes. At the end of that year, I introduced myself to give up a subject that I had prepared for 3 months, but  when I had to start talking I didn't remember anything . I had to apologize, stand and retire from the table.”

Thus, José Luis's race was being completed little by little, very slowly, and as he overcame the obstacles that were presented to him. Everything is for her passion: “What I am passionate about is the part of literature. I've been a reader since I was a teenager.  And my real passion is history .” In addition, the teacher confesses that he was already satisfied with the mere fact that he had surrendered some subjects: “I wanted to prove to myself that I was going to be able to do the career. And I didn't need to finish it, because I already knew I could.”

And, as always, and especially in the pandemic, the family played a very important role. “It's quite an event to have received me.  I've been celebrating it with the whole family because they've had to endure me for all these years.  It was the support for me to finish. On more than one  occasion  I thought I didn't follow anymore, when I was missing 2 or 3 subjects. Even if he disapproved of the last matter, he wasn't going to give it up again.”