This story, like so many, may be lost in the whirlwind of Internet news, but the important thing is to know that there are people who make a difference with these little things. 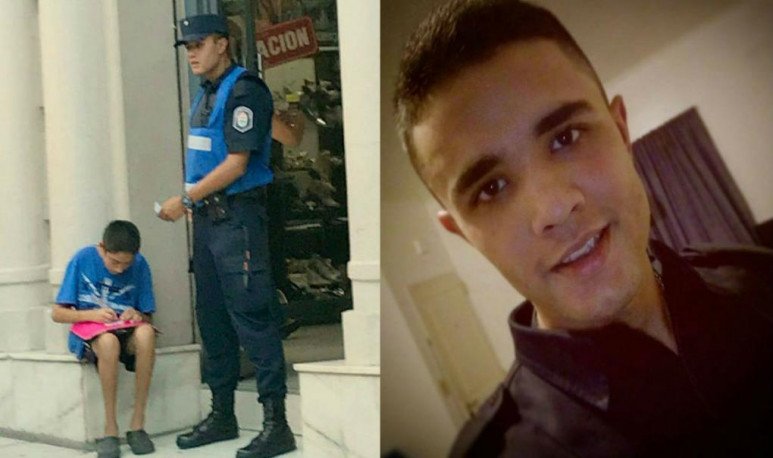 Sometimes we lose our  hopes  completely. The world is so bad that we feel there is nothing we can do to start changing it. We feel powerless from our place, nor do we believe in the institutions that should look after our interests. We are not convinced by the speech of providing  “a bit of sand” , because we have the feeling that nothing will be enough. Because, it is true, much needs to be done: there are people hungry, without access to education, without future projections, forced to focus only on surviving the day to day. The needs are infinite and our transformation tools are finite. We often do not have resources or enough time to change the course of history and leave behind such an unequal and unjust society. However, every time and everywhere, we see  small gestures  that make us regain faith in the country and in people. Attitudes that confirm that yes, something we can do. We just need to pay attention, follow the example and multiply it.

Cristian is a  police officer  in the city of Paraná (Entre Ríos). A few weeks ago, while he was on his regular guard, a guy in the street situation approached him to ask him the time. His name was  Pablo . Cristian noticed he didn't know how to read it and helped him interpret clockwise. He warned that the child's interest was asking for more, so he pulled out pencil and paper and began to  teach him  a few words, there on the sidewalk, where they improvised an outdoor classroom.

A neighbor passing by saw in that scene the  hope  we were talking about before and could not resist: he took a picture and uploaded it to his nets, excited about what he had in front of him. In the picture you can see both Cristian and Paul, police and child, teacher and student, in a space of meeting, teaching and mutual learning. We can warn just by seeing his bodily attitude how the policeman does not neglect his work and, at the same time, is very attentive to the evolution of his apprentice. We observe how Paul is committed to his task, we are moved by his life story and wish it was different.

In a short time, the scene of officer  Cristian Irigoitia  became  viralized and he  was “famous” for a few days. He moved by his ability to look at the side and worry (take care) for his neighbor. We feel identified with that desire to do, from our place, the best we can to counteract, even a little, the injustices of the world. We wanted to embrace Cristian, Paul, all those who suffer and those who act to heal them at a distance. We feel, even for a while, that things can change even if institutions don't: it's up to us. It only takes goodwill, empathy, love for others and a little altruism.

This  story , like  so many others , may be lost in the whirlwind of Internet news, but the important thing is to know that there are people who make a difference with these little things. Unfortunately, there are many people in the same circumstances as Paul. But fortunately, there are also many people like Cristian, willing to give what they have, even if it is only time - which is not a little -. The important thing is to ask ourselves what we can do, from our place, to enhance integration and narrow the opportunity gap. What can we do? All I know is that examples like Cristian and Paul bring us closer to the answer. For Paul, for sure, that wasn't one more afternoon, and for Cristian, neither was it.