Home People Stories of people Nothing is thrown!

San Juan: Faced with the crisis, Emilio decided to build furniture with materials that his neighbors discard. 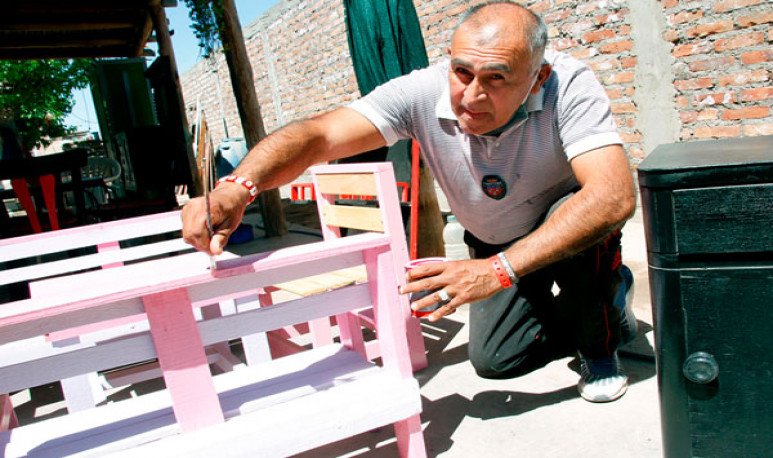 Emilio Isidro Oro  walks the streets of San Juan  in search of disused furniture or that neighbors are about to dismiss. This 57 year old sanjuanino devised a way to earn a living  by collecting these materials and transforming them into pieces  that will then be sold.In his workshop he turns the old woods into new creations to have a  source of income . Get the raw material by touring the neighborhoods of Rawson and Pocito, where he appeals to the  goodwill of people  who wish to give him what they no longer use.

Emilio  works as a carpenter from a very young age  and inherited the profession of his father, who was also a wood  craftsman  . In his youth he decided to move south where he was able to work on what he likes. There he worked for several at the Casa de la Cultura and then in a carpentry until an accident would change things forever.A serious problem in his heart made me evaluate the possibility of moving. Once he managed to stabilize his health, he settled next to his wife in Chubut province.

In Trelew, luck was not the same and  he had difficulty getting a job.  He tried his luck with different trades, from firefighter to first aid, but finally moved to Buenos Aires where he worked for a company located in Pilar. In this province  he lived two incidents of insecurity that made him rethink his return to his native San Juan.

He says, when he returned to his roots, things were not as he imagined them. He looked everywhere for a job opportunity, but everyone told him he  should finish high school. In addition to his advanced age, a stable job became a complex reality.  However, he never lowered his arms and decided to generate an  entrepreneurship  that would allow him to support his family.

While in his parents' house, he maximized his creativity to  come up with a way to survive and combine work with one of his great passions: carpentry . For the Sanjuanino this craft is “a gift” that allows him to be relaxed from problems by requiring him to focus only on what he is doing, especially if one puts love to what he does.

From that moment on, Oro became a frequent visitor in the Sanjuaninas houses. Ask the neighbors for woods, furniture to be thrown away, everything that can be used for him in his workshop to turn them into a  renovated furniture that he sells on the door of his home.  Its stock includes wooden ornaments, bedroom chair set, games for boys, dressers. He recognizes that what he likes most is  restoring antique furniture , which represents an arduous but  satisfying job.

His enthusiasm is admirable , Emilio does not have the necessary materials to perform all repairs, his work is “on the lung”, always looking for a way to avoid having a grinder or draft machine. They are so eager to bring a plate of food to the table that  he knew how to manage them to give up having these tools.

Emilio celebrates every sale, sometime sold an armchair and, not well closed the sale, walked 15 blocks to look for new materials  and begin the restoration of another piece of furniture. He barely gets the woods, loads them on his shoulder and leaves home to get to work. The man said that, in order to acquire these elements, he sought alternatives in government aid programmes, but to date did not obtain favourable responses.

Emilio is an example of struggle, perseverance and vocation. A man who knew how to get ahead with his lung.  A Sanjuanino worthy to admire.