Home People Stories of people Nelly Cardozo: a correntina with the memory between the fingers

Nelly Cardozo is one of the Correntine craftsmen who surprises and delights the population with her masterpieces. Sewing the espartillo, a native species, is dedicated to building memory. 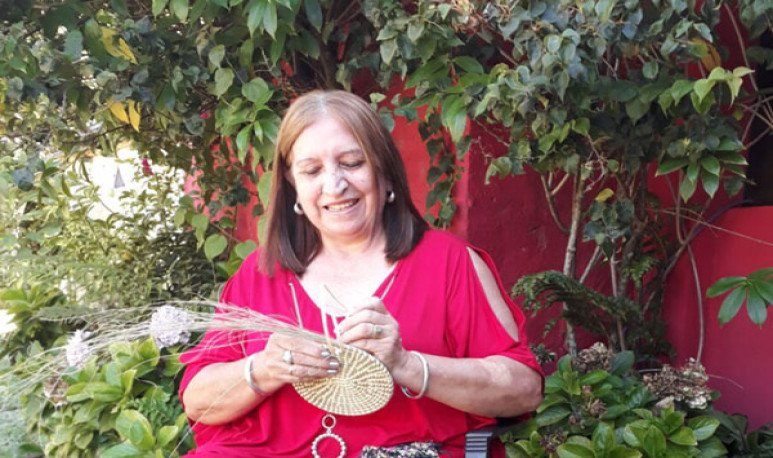 In the garden of her house in  Concepción del Yaguareté Corá , in the Iberá region of the province of Corrientes and 150 kilometers from the capital,  Nelly weaves memory . It is one of the few craftsmen who are still  engaged in “sewing” ispartillo and palm  to make all kinds of handicrafts. From plates, trays, bread boxes, to bags, seamstresses  and everything your imagination dictates to you.    The needle you sew with is homemade  and made with the rods of the umbrellas that are getting old. The knowledge with which he does  his job, is ancestral and historical.

In his project, Nelly Cardozo's husband  harvests the espartillo about 20 kilometers from where he lives.   At each harvest, it performs thorough work, since  the plant is edged and can cut.   This plant artisan learned  the technique of grandmother  from her life partner,  43 years ago.   From that time until today she is in love with the technique, which became her main  source of work and inspiration.

Nelly's handicrafts, in addition to beautiful, are characterized by unmatched neatness.   She is responsible for designing objects that are useful for everyday use and that are not just decorative objects.  Although the beauty of each work  deserves to be used as such. “ If one is dedicated exclusively,  you can live on this,”   says Nelly.

“ But of course,  you have to be willing to work all day . The technique is not difficult, it is practical, but  there has to be interest in learning the sewing and how to harvest and store both the palm and the espartillo , which once collected must be allowed to dry in the sun several days.  I love to  sew and I can do it while converting or watching a movie.   I have memory on my fingers.”

Nelly says that, for 3 years,  its sales have been growing noticeably thanks to tourism.  In addition, he does a teamwork with the people of the hotels who make  their handicrafts known  to the visitors who arrive.  “ My clients are mostly tourists, but I also have a lot  of interaction through my Instagram,  where I contact a lot of people and they place orders from all sides,”  he says.

The most requested is  the plate pose 30 centimeters in diameter,  although the bread breads  are also protagonists . Despite the great call of the other objects, Nelly's favorite are  multi-function hens  that serve to store eggs, as an ornament, as a seamstress or to store food well covered and protected by flies. 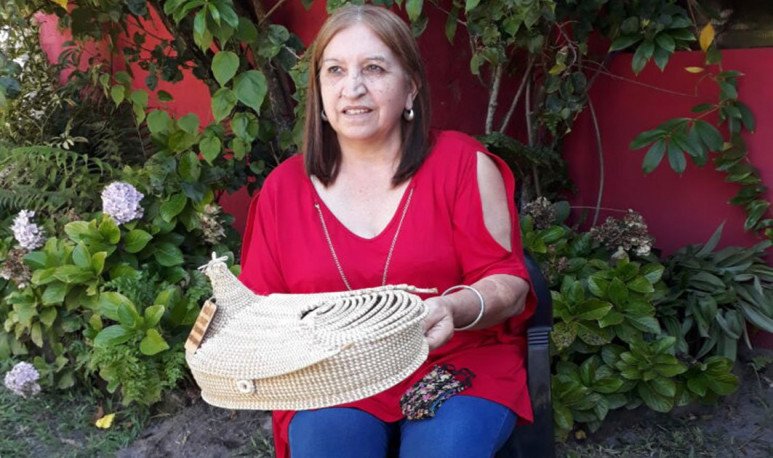 But his work is not only artisanal,  it is also a contribution to the general culture of Correntina . Since  the technique with which he works is millennial and hides secrets from the native communities.   In this sense,  the Artesanos del Iberá program  , carried out by the  Institute of Culture of Corrientes,  plays an important role as it  disseminates its work .

Fairy Irastorza, coordinator of the Programme, and who has a great commitment to the  cultural heritage of Correntino  says that “Artesanos del Iberá aims at the recovery of  techniques endangered  or that are already extinct and that we must have to  recover with very concrete actions  ”.  In addition, the specialist in Correntina culture, highlights  the economic value of these practices:

“ Last year it was very successful in sales despite the pandemic and the non-circulation of tourism. Today, many artisans continue to support their customers because  decoration and gift houses  were made orders and this  facilitated the economic movement  that also favors the  conservation of heritage  because what has no way out is not sustained in time and the new generations do  not want to do it if they see that it is not profitable.”

Between the Programme and  the hundreds of artisans  from the Correntine lands, they are responsible for  not letting ancestral traditions die.  Applause!