Raúl Alvarez dedicated a large part of his life to forming a collection of almost three thousand items. 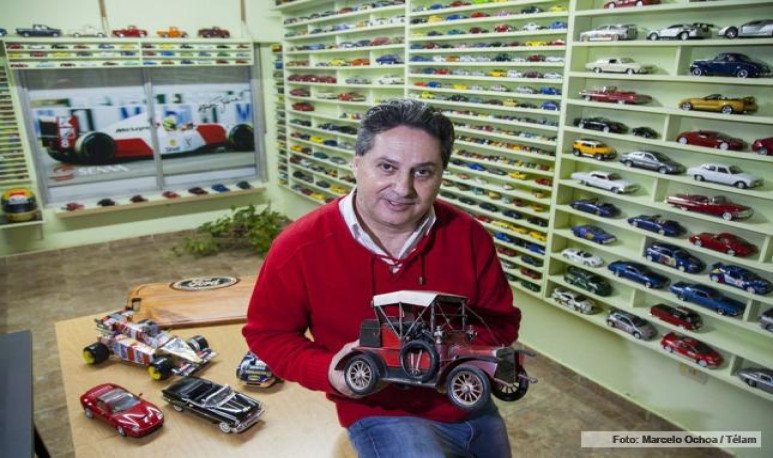 Raúl Alvarez dedicated a large part of his life to constitute a collection of almost three thousand cars, including formula one, rally, taxis, road machines, tractors, vans, trucks, old, new, old, modern and even artisanal ones, which occupy the top of a heaped bookshelf. “There are thousands of anecdotes,” he told Telam in front of the collection that generates a visual impact of astonishment and charm, in what is a kind of miniature automobile museum. On the shelves placed on all the walls of the room, mark a strong imprint the Falcon Futura and the Cupe Chevy, “replicas to scale 18 in 1,” explained Alvarez, creator of the program “Original Version” that is broadcast every morning on LU 15 Radio Viedma.

The old Durabit, shine impeccable along with those of industrial manufacture, the handcrafted veneer or wood. Among those in competition are those of Turismo Carretera as “the Chevrolet 7 Gold by Roberto Moura that was hand molded, in aluminum, and brushstroked by a person from Los Toldos in Carlos Casares,” he clarified.

An emblematic and unfailing element is the Airton Senna helmet, which resurfaces with its undisputed talent with certified replica number 87, of the thousand yellow reproductions specially manufactured by the Senna Foundation, in a tribute to his birth. “I learned to read with Corsa magazine,” explained Alvarez, “my passion for cars was born at that time. My old woman told me that from the age of 5 (years) she sent me to run errands and I was going with the lid of a hole, playing what I was driving.” “A lot of these cars are given to me by listeners, some also come to see my collection. I don't have it open to all audiences but it's my hobby, I never gave it the importance they give it here, even in economic terms,” he added. For him, each car is an invaluable piece for its meaning and because they represent multiple anecdotes: “This one gave me the Black Omar Linares,” he said taking one of particular beauty.

Linares is a prominent and renowned pallist from the region who still leaves his mark in international sports competitions of rowing. In the collection, there are also the autitos from different parts of the world such as Italy and Japan. Raúl Álvarez did not lack enthusiasm to build with soda cans, beer or energizers his own vehicle: “Everyone was amazed by the patience I took to achieve it, I got the plane of a truck and built it, then I thought a design particular and I achieved the second”. “But my great pride is this Formula 1,” he said before one made by his own hands. The collection involves John Deer road machines and tractors, who “gave them to you next to the tractor that was bought to work”. There are also “the world's taxis and rally cars of the world”, the American and German classics.

The one who keeps looking and cannot get is the reproduction of Ford Mondeo, he said still hopeful to be able to integrate it into his fierrera collection.

“The doll” is not satisfied

“I don't like it when I “face it” because I realize”

“I'm a fan of those who make humor”

Patricio Giménez: “Chamuyero is selling 10 times more than you are worth”