Meet the Spider-Man of the West, a supportive superhero. 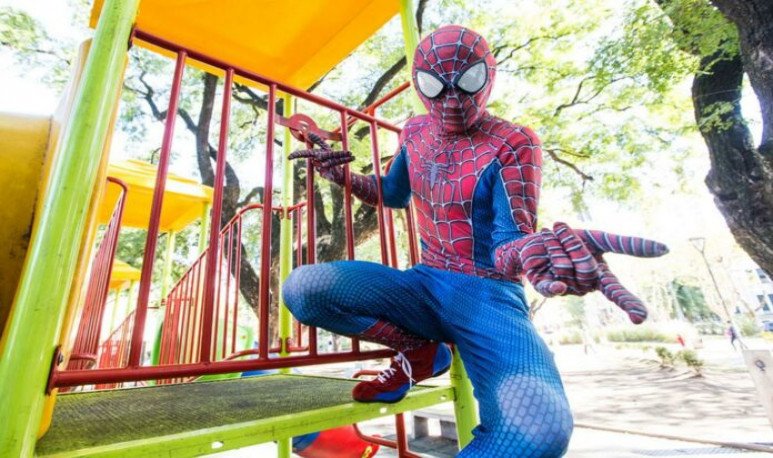 I always liked living in my neighborhood, that's why I never moved. Most of my friends are still around here too, which makes our olds' stories replicate, and their children grow up now in the same streets where we played as boys. As another neighbor, then, a few weeks ago I went to visit my friend Nati. We took some mattes and, while I said goodbye to her at the door of her house, someone walked by the sidewalk behind my back. Feli's face, the biggest of his children, suddenly lit up: “ Spider-man ! ” he shouted. I turned and saw him:  Spiderman  himself stood behind me, waving to Feli who could not understand how his favorite  superhero  happened to pass through the door of his house. That's when  Spiderman  looked at me and said, “You know who I am, right? ”.

Excuse me if I break the fantasy, but no, I'm not Mary Jane Watson, or any of  Spider-Man 's girlfriends. But he did know well who this  superhero  of the conurban was who had exploited Feli's smile and illusion. His name is  Rubén , in  Ramos Mejia and surroundings we know it all and there are many children to whom he carries joy hidden under his costume; so many who is already famous as the  Spiderman of the West .

Rubén Pastorini  is a neighbor who runs the streets of Ramos Mejía and Villa Sarmiento  in the shoes of the superhero  , aboard his motorcycle  , greeting everyone and receiving the affection of the people. His costume is sometimes his livelihood: he animates birthdays and other surprise events, as well as working on his own car washes. However, the most valuable is the  solidarity  side of  Spiderwest  . Ruben also uses his second personality to bring joy to those who need it most. Once a month, together with " Kawaclub " and " Motos por smila “, they visit children from canteens, foundations and hospitals , such as Pedro de Elizalde (former Cradle House), Garrahan and Ricardo Gutiérrez.
Spiderwest  came to bring joy, enthusiasm and laughter, and I can attest that that happiness is contagious and spreads throughout the neighborhood.

Not all superheors wear cloak

There are many stories that present us with admirable people who donate their time and energy to help others. This is the case of Superheroes Solidarios Argentinos, a group of people of all ages who visit hospitals, homes and solidarity events disguised, obviously, as superheroes.

“We played with spontaneity and improvisation. It's beautiful for them, for their family and for us,” Patricio, one of the founders of this special group, told in an interview.

“Several of us were in other solidarity groups and with some guys it occurred to us all to get together in oneself and do this. The main goal is to give the kids and their parents a smile and that by that moment, either little or much, through fantasy we help them through the situation they are going through,” he added.

“We always train our visits to go out in the best way, but we don't have something planned beforehand. Let us take the moment and see what we meet on every visit. We play with spontaneity and improvisation trying to take care of every detail to respect the situation of each child. It's beautiful for them, for their family and for us. Sometimes some people are shy or find it harder to open up to new experiences, but we try to break those barriers and reach every heart,” said Patricio.

In addition, he said that he remembers that once in a hospital there was a guy who didn't eat and didn't feel like doing anything. After the visit of the superheors, their mother told them that thanks to the smiles they generated, the baby again wanted to feed. “These are things that fill your soul,” Patricio concluded.

Dale and its meanings