6 years ago, in Comodoro Rivadavia, Mascoteros Metaleros Unidos was born. 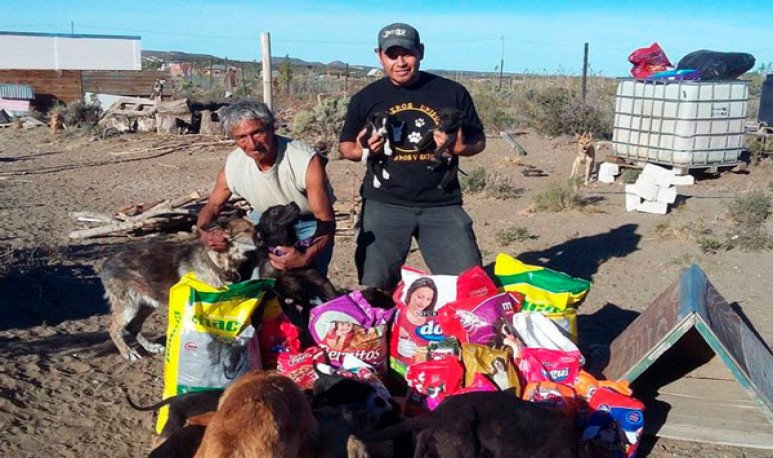 In  Comodoro Rivadavia we can find different stories. In that   Chubutense   city that grew up with the strength of the  oil industry   , we found true pioneers in its branches, sports talents, outstanding professionals, supportive people, but today we bring you a different project, which has a responsible leg, an affective leg, and the other two, you can identify it yourself at the end of reading the story of the  United Metaleros Mascoteros , an association. oacute; n of that Patagonian territory.

The non-profit association works to dignify the transit of several dogs: between 60 and 80, depending on the time of year and the cooperation and adoption of families, which, although not happening continuously, many of the animals end up being part of other people's lives.

The space and shelter of this association is at Km 17; where Oscar, Ariel Rojas and many others encourage responsible care of animals: it all started with co-founder Rojas approaching the dump (because his sister's mascot had been lost), and meeting dogs, many puppies and mostly malnourished, living and eating there. He couldn't be indifferent and he began to bring them food. Then he joined Oscar, who had a large terrain, already with some dogs and began to collaborate together so that these animals and also some cats, could have a better life.

Mascoteros Metaleros Unidos was founded about six years ago . Ariel says that the name was because it was the music he listened to, and there are people of different ages and musical tastes, and that name becomes much easier: “According to Google, we are the only organization that bears that name,” he says.  Sometimes he is “scared” that he is only associated with metal music , but that doesn't stop him to continue helping his dog friends.

Oscar, at first, had 8 dogs, then they added those who brought from the garbage dump, from the streets and other bitches that left pregnant; to this day they are all neutered, to have greater control and responsibility, since both understand that it is a state problem the non-control and indifference of the families.

In addition to the care of animals in that shelter - family, they give talks and are presented in projects and events to make themselves visible, to educate and inform children and families how to be responsible with pets. His work has reached other parts of the country, from  Mar del Plata , to deepen alliances and knowledge with other similar organizations; they have also been interviewed by an Argentine journalist in Hollywood, United States, to make these two passions visible.

Canine and cat overpopulation  (although the latter is more visible), is a problem in several cities throughout the country.   against this problem of which little is being talked about, much is seen, and that there are no concrete long-term actions either.

Mascoteros Metaleros Unidos does not have any state aid and carries out different campaigns to cover daily expenses: raffles, sale of cookies, participation in fairs with hand-made suppliers of own production. Many times they place a solidarity order through social networks, where they have many followers not only of  Comodoro Rivadavia  but also of the region, for their brave pasi oacute; n: on Facebook have already passed the 7000 likes, and you can also communicate via Instagram and cell phone, which is 297 5933736. The two passions have come together to work together for the best friends of men and women. Care, responsibility and education, as the paws of this organization. Keep growing, Metaleros Unidos!