Have you ever seen a strawberry explaining about sexuality? I figured it. Parana Camila Dappen does it through Miss Vulva. 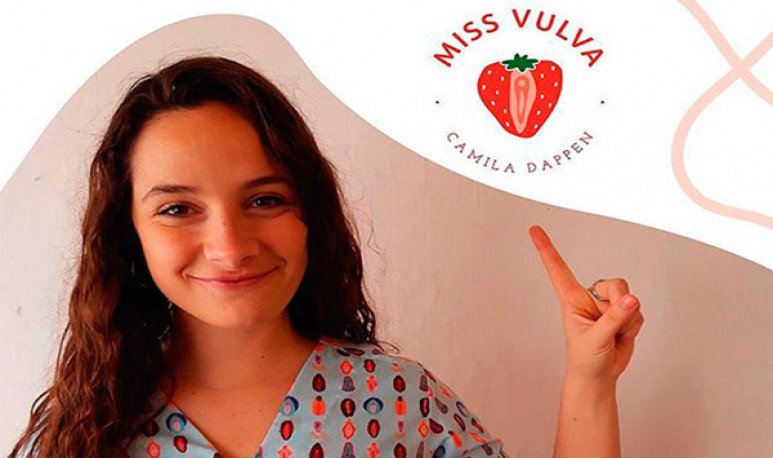 He's on his way to his 26 years, but the chronology has nothing to do with  professionalism and  commitment  here.  She is entrerriana and received a binational degree in Obstetrics in 2018 . She has gracefully that, in the guards, the mothers of her patients observe her with distrust. It happens that the features of his face give away his  youth . Something that can be criticized by many and is an aspect in favor of others. Undoubtedly, Camila takes the attitude of the last group.  She is determined, clear, concise and with many ideas about the  world  you would like to live in . And her way of  contributing  is through an  Instagram account  she called  Miss Vulva  .

Good red and without taboos

Strawberry  acquired a whole new meaning from the emergence of Camila's project. It is his  personal brand  and the ingenious  way  he chose to  represent   female genitalia  . More specifically the  vulva . Yeah, that  corner of the woman's body  that, for much of history, was a  forbidden word  . This is precisely the  schemes  that the initiative  intends to break so that something different can be born  .

If you are asked about the  goals you are pursuing , you ensure that it is an endless list. Although, finally, it is decided by one word -  empowerment .  Both in sexual and reproductive health counseling and  motherhood  . “Transmit that health decisions are made by the user and not the professional because they have the knowledge,” he adds without his pulse trembling. His  great longing   is to achieve reflection and rethink  in those who are on the other side.

In this regard, Miss Vulva's publications address  various problems  that start from the little chatted to the directly ignored by many  . Some of them are sexual assertiveness, violence in gynecological consultation and men's ignorance of the woman's genitality . As well as the  lack of active participation in sexuality . To do this, it is stated in authors and professionals recognized in the topics. But  the main protagonists are followers , who  add reality to theory through  surveys and stories .

“ Unexpected and unbelievable,” describes about people's response . Something he never imagined  when he came up with the idea while he was going through the quarantine  by the pandemic. “Honestly, I have no intention of being recognized.  With my project to invite you to raise awareness and give it the importance it deserves to sexuality, I have plenty of spare . The change starts there,” he emphasizes about  future projections  of the account.

A girl destined to help women

Camila studied and graduated from the  National University of Entre Ríos and the University of the Republic in Concepción del Uruguay . Her fascination with her career  began when she  was a  teenager  . Back then, she was watching birth programs on Discovery Channel.  “ I found out that I didn't want to be anything but a midwife,” she adds firmly. He was very curious about the processes that give rise to embryology and physiology of childbirth. And, as if time had not passed, he adds with emotion:  “I still wonder how wise the woman's body can be.”

While his  passion  for his profession is unabatable, he also admits that it is  exhausting  . It involves giving yourself to an agenda in which there are no times or dates. Maybe you'll have to wake up in the middle of the night or you can never put your cell phone silently. However, he does not babble when it comes to talking about the  satisfactions  he has experienced during his  journey  into the countryside.

“I always say that being a participant in such a unique moment as a birth is priceless. It is a difficult process where you experience a lot of pain, fear and uncertainty,” she tells about the challenges that arise. Therefore, accompanying and holding future mothers during the instance is very rewarding for her.  There, his great goal in life takes shape: to continue working in public health .  The space in which he learns the most, is nourished and, mainly, can be placed at the service of women who are so idolized .