A Tucumano and a Santiagueño created Nüwa, a place on the red planet. Would you leave everything to move on a rocket up there? 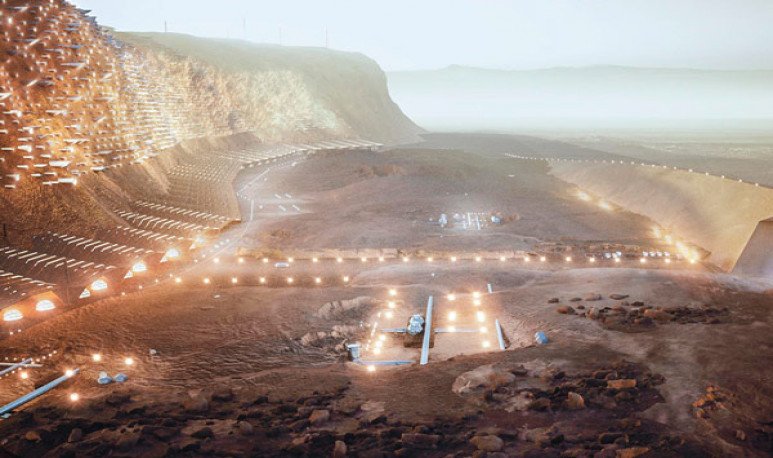 The Mars Society  called for an international competition for the construction of a metropolis for one million people on the planet Mars, under the power of whether it is possible to design a city that is  sustainable  and attractive to live on the day it is decided to colonize it. Among all the projects that were presented, an international team called SoNet was highlighted, with the participation of a Tucumano,  Sebastián Rodríguez,  30, along with santiagueño  Gonzalo Rojas,  also of the same age. Both students of the last year of the architecture career at the National University of Tucumán, work for the architecture studio Abiboo, which was also part of this challenge.

The Sustainable Offworld Network (Sonet) is a community of professionals from Spain, Germany, USA, Austria, UK, and now Argentina, which is dedicated to project development  sustainable  off planet earth, focused on Mars and the Moon. The team is headed by the astrophysicist of the Institute of Space Sciences, Guillem Anglada Escudé.

Sebastian and Gonzalo were responsible for the architectural design of the extraterrestrial city under the leadership of Alfredo Muñoz, founder architect of  Abiboo Studio . In this sense, the  santiagueño  explained that he with his partner Tucumano are dedicated to doing renders, also directing and editing the video of Nüwa's presentation.This is the name that acquired the main city of the five that will have Mars and is where they estimate that 200 thousand inhabitants will live.

Nüwa was designed to house a million inhabitants. In this sense,  Rodriguez  explained that the first colony of 1000 people would arrive in 2050 in a rocket and then constant trips would be made to populate the city little by little. It should be noted that these trips would be made at a specific time, as it should be expected for Mars and Earth to be in opposition, that is, at a shorter distance between the two, and this happens every 2 years. In addition, the tucumano explained that the trip would last 8 months and the value of the ticket would be equivalent to what it costs a two-room apartment in Barcelona.

When designing a Martian city on the planet Marte, Tucumano together with his team also took into account a social model, which would consist of sports spaces, a system of colleges and universities, cultural spaces and places of recreation. In this sense, Argentines clarified that although it seems a science fiction city, it is not, since it is a realizable city that was conceived by professionals who are trained in each of its areas where feasibility studies were made so that human life is possible there.

One fact that is not less is that Mars is the planet most similar to Earth within the solar system and the choice to design a city in this place arose by the conditioning factors of Mars, which has a gravity that is one-third of the Earth. While buildings like those on our planet could not be built, as they would explode by pressure, the designer Tucumano explained that the buildings would be built with plastics and other polymers, which are easy to produce on Mars and the rest would be metals and minerals that can be obtained from the Martian soil.

According to the available sketches, these would be semi-underground macrourbes that would have galleries of 20 meters in diameter and up to 300 meters deep. Inside, they would have mirrors where natural light would bounce to the depth of caves that would protect the inhabitants from the inclement climate and radiation of Mars. Cities would have solar panels and nuclear reactors to ensure electricity supply, also for leisure areas such as parks and cinemas, spaces for work that would be mostly robotized to save labor, crops and recycling plants.

Also, Tucumano stressed that on Mars, for the subject of radiation and the atmosphere (which is only 1% of the terrestrial), to obtain water and oxygen you have to be very careful.In this sense, it was thought that water would be obtained from the planet's soil and oxygen would be generated by microalgae.

Both Tucumano and Santiagueño also studied the gravity of Mars, and explained that it is 38%, which implies that, if someone on Earth weighs 100 kilos, on Mars only 38, that is why this data led them to analyze the issue of moving outside buildings, since people who live in that city float Í like astronauts.

The authors of the project believe that food production is what is going to consume the most energy, since food would be a combination between a vegetable-based diet and insect-based animal protein, which is the most economical thing to produce in terms of sustainability. Although the possibility of having meat and fish was analyzed, this idea is the least efficient. In this context, tucumano emphasized that food could be generated with bioreactors, a technology that is already used on our planet Earth for the production of animal protein.

In this way,  innovation  surpasses fiction, tucumano  Sebastián Rodríguez  encouraged to project a city on Marte, along with his companion from santiagueño  Gonzalo Rojas , who designed Nüwa , a sustainable place on the planet Mars.