Home People Stories of people How does a sharpener live?

Meet Dylan, ex officio: sharpener. When you hear the flutite, you have to go out to the street quickly. 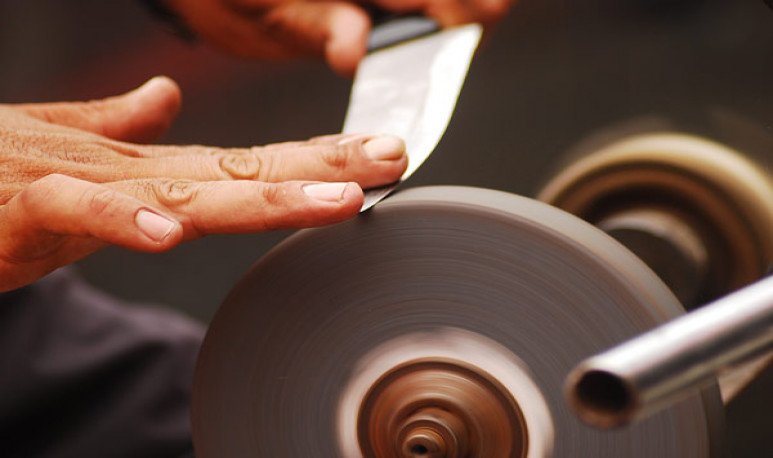 I already made more than one note for Ser Argentino about the  former street vendors  in Santa Fe. There's one of those street trades that persists in our city. It is a very particular one, announced by an unmistakable sound. The sharpener and his flute. On this note, I met Dylan. A sharpener that, every day, pedals more than 10 kilometers from his home in Colastiné , to spend the day in the city. He does it  working and solving a problem for people.

This boy learned his grandfather's sharpener job. That is, he acquired the knowledge by generational transfer. Dylan tells that the gentleman had a house dedicated to sharpening kitchen blades in Colastine. Sharpening houses are something that there are almost no records left.  They were places where the butcher's saw, the blade and the knives were sharpened.   But his market was bounded. It's just that the butcher's disposable chopper leaves began to come out. Thus, these gentlemen began to incorporate other services: scissors, saws, machetes, circular cutters, printing blades. Perhaps it is because of the reality of this area that, for domestic sharpening, the service of the walking sharpener is still more useful. The service provided by Dylan.

The boy also learned the work of his father and his uncle . And there, in Colastiné, lives Dylan and from there he arrives on his bike.  He comes during the weeks from the coastal district to this capital to sharpen everything But he also goes to Sao Tome : give him pedaling.

Dylan has a whole engineering on his bike. He mounted an iron structure on it to leave the rolling fixed, and thus make work by cyclic traction to the stone, which is in another structure, near the handlebar . Mechanics is the rear wheel of the fixed bike, which has a belt to where the sharpening stone is (belt  that is from an old sewing machine). The kitchen blade patiently glides over the stone, which rotates, again, with pedaling. The cutting edge and recessed of the blade is made; so that the cutting edge is finer and neat, it is “rectified” with the chaira. There is also the polisher, to give the finishing touch to the work. Sharpening is done in about 10 minutes, depending on the blade.

Dylan has a brown leather bag hanging with some must-have utensils, such as a chaira. Speak and what is heard is steel and stone when rubbing, from left to right and vice versa, slowly. The story tells curious epics of Galician traveling sharpeners in the 17th century: and yes, it is to say that the craft of the sharpener is very old.

It's terrible the journey that this sharpener makes on his bike. It should be borne in mind that from Colastiné to the capital (taking as reference the Pendant Bridge) there are about 10 kilometers.   From the Colgante Bridge to Sao Tome, approximately 13; and from the center of the neighbouring city, back to Colastiné, there are about 21 kilometers.

This young sharpener leaves us some tips, in case we can't find him on the street: