Home People Stories of people From footballer to butcher

Ceferino Aguirre is the hero of the Independent team of Neuquén. Today, due to the crisis, he went from footballer to butcher. We tell you his story. 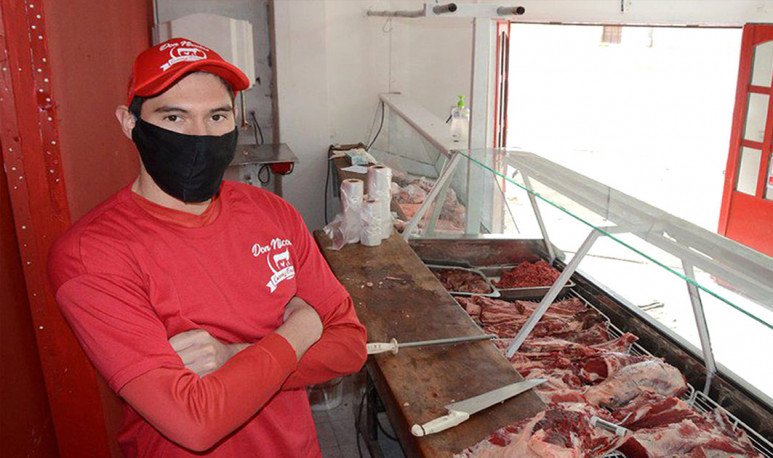 Ceferino Arregui is a native of the city of Neuquén. There he is known for being the goalkeeper of  Club Atletico Independiente . He is 26 years old and,  because of the pandemic, he was left without a job in regional football.  He's in a couple with Rocío several years ago and they're parents of two girls. When the sporting activity stopped,  he was forced to look for other options to cover family expenses . So he went  from footballer to butcher  for a while, although both activities have a special affection.

As Ceferino recalls, his  passion  is inherited.  It was his grandfather Nicolas who marked him during his childhood . He became some kind of idol for the little one! And he was also an archer and he was a kind of mirror for Arregui.

So it was that, in its beginnings, grandfather became the main motivator. Ceferino remembers the talks, the confidence he conveyed to him and those words of encouragement in which he told him that he had a lot of future in  sport.  The distance between grandson and grandfather did not always his idol be able to accompany him in every match. However, he was attentive during the preview and also at the end of each match. His phone calls to know about the grandson were constant.

Thus was born this  inherited passion , which led him for a great career in his position as goalkeeper, in very important clubs.

From sport to trade

As is known, the  pandemic  brought consequences in all the activities of our lives, and Ceferino was no stranger to it. Suspended sporting activity and tournaments on schedule, she had to look for her around to survive.

Therefore, the Neuquino decided to talk to his father (who has a market) and proposed to  open a butcher shop  with his brother. They started the  family business  and went from footballer to butcher in just weeks.  Today the neuquino helps to cut meat, gives attention to the public and takes care of the box. Customers are happy with their work and congratulate him all the time for his great  example of improvement .

The player does not lose hope that soon the pandemic will end and activities on the court will be enabled. However, he is aware that it will no longer be the same.In his words, “winter will come strong, and perhaps it is best to wait for the arrival of spring.” He says he  misses everything about football, teammates, costumes and especially  matteadas  . With his hands, he saved his team many times in major federal tournaments. In addition, he was the hero of the last Neuquén championship held in December last year.

His hands went from catching balls to using the blade daily to make  the best cuts . The crisis left him no choice! In this situation, the fundamental thing for him was power

to solve the family economy. The situation had been very complicated as everyone had, and he had debts to be paid. That's why he didn't think about it twice! As they say,  he hung up the booties for a while  to get ahead in the middle of the pandemic.

And the demand of the court also led her to trade. They say that this hero of the sport is increasingly demanding about his work as a butcher. For him, quality, dedication and commitment are the most important pillars. Therefore, when the time comes to return to his bow, this neuquino will continue to make him the desire that has always characterized him.