Home People Stories of people Falklands: the end of the melee war

We tell you the story of the soldier who drew his knife to attack and defend himself, but he answered a relieving statement: War is over. 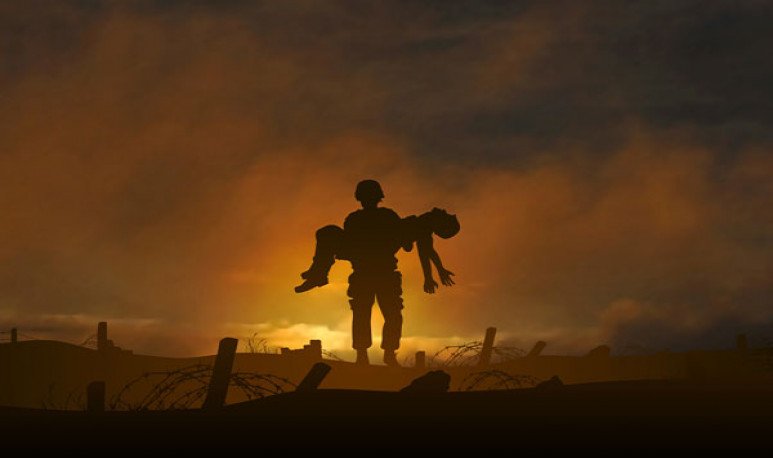 They are not heroes, they are not angels, they are not martyrs: they  are young people who left their lives in a war that was already lost.  They are Argentine compatriots who  walked straight to death, pushed by a military government.    They are people of flesh and blood  who armed themselves of courage to fulfill a mission they were obliged to carry out. From Ser Argentino  we admire them from the depths of the heart  and think that a good way to repay  so much life force and honor is exercising memory  . In this note we collect an episode of war that has a very strong symbolic weight and which, even in peacetime, touches us.

Another day, another attack, war is that.  In the middle of one of the many shooting he lived,  Corporal Roberto Bacilio Baruzzo sees Jorge Echeverría, his superior and friend, wounded with several shots in the body and surrounded by English soldiers who do not stop attacking him. With impotence, fear and courage, he decides to allocate all his skills to save him.  He manages to shoot down an English soldier , stealing his rifle and night visor. With these two elements  he sets out to protect his partner.   But, despite having new weapons,  he is aware of the disadvantage.  However, he  does not let discouragement beat him.  Raise the rifle and start covering Echeverria, which by then already had  five bullet hits.

“ I grabbed and killed one first. Then another came up and I killed the other one. And suddenly on the other side they start throwing me out with tracing ammunition...   they didn't kill me because I have a God apart   . That's where I saw Jorge shoots the guy who attacks me and hits him. Then I take advantage and jump and grab Jorge's jacket and take him behind a stone. But the problem is, we were two, and the stone for two wasn't...

Echeverría tries to stand, but fails, does not feel the body.   Baruzzo tries to cure him with his knife:  “There I saw the holes of the shots. I pulled the cord out of his jacket, tied his leg, made him the first tourniquet, and started dragging him off the jacket.”   He continued to defend himself and defend his partner,  advancing with his body to his slopes through the snow.  In a moment they cross  a silhouette that starts to shoot. Baruzzo remembers, “The bullets came on me, but Jorge tied them up... so I fired, put that guy out of combat, and  there Jorge collapsed.”

Echeverría asked him for water, Baruzzo took out his bottle of whiskey and invited him, like who offers the last drink.   “ He was dying. A strainer was made.  But I had a peace.   I had everything I needed,”  he recalls. Echeverría asked him to let him die, but Baruzzo knew that if he abandoned him and managed to get out alive (which was almost impossible) he would never forgive him.  He decided to stay with him , although Echeverria insisted, saying, “Robertito, leave me, I ask you please.”

Baruzzo broke in crying on his partner's chest. It was the crying of  a 22-year-old military man who just killed and was watching his friend's life snatched from him, with the certainty that he too will die.

Finally they find themselves without apparent threats, wounded, ice cream and no ammunition, but together.  At one point, Baruzzo  puts on the night visor and begins  to look at how the English figures  begin to surround them .  “ I knew that the English's way forward was by steps, one formation behind another covering each other. What I didn't know was how many steps there were,” he recalls. At that moment,  certainty invades him: It is the certainty of an imminent death.

Maybe he doesn't fiddle, he pulls out his knife and puts himself in the sign of a fight. Then the silhouette  of the first Englishman appears almost above it.  Melee, in the middle of darkness, the two men look at each other, but English  does not liquidate it, it does not attack it, just look at it . With the gun barrel on his arm, he gives him  two small blows  indicating to disarm. Announces: “War is over.”   The war is over.  As in the last act of an absurd, shocking and painful tragedy,  mortal enemies embrace each other.

In the touching scene, Jorge Echeverría  was still bleeding to death and not the chances of him coming out alive were almost zero.   Still, he was put on a British helicopter and sent him  to the British hospital ship HMS Uganda.  They saved his life. Today, Echeverría lives with his wife and two daughters in Tucumán. He and Baruzzo continue to share  other small battles of everyday life, together and defend themselves  at  all costs . 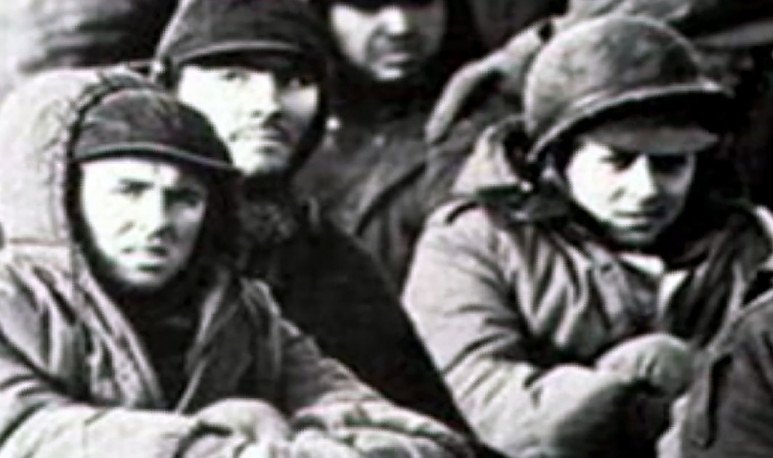 Corporal Roberto Bacilio Baruzzo  is today 60 years old and lives in Corrientes, his native province with his family.   His story is one of the many heroic stories of Falklands.   He was  one of the few fighters   to receive the Cross to Heroic Courage in Combat, the highest award to which a soldier can aspire Argentinian.

Although that long-awaited medal is not the only recognition that the brave Baruzzo received . In Riachuelo, the town where he was born, has a street with his name.   Even, in the city of Corrientes, where he lives today,  he was bust as a tribute to his value  . However,  its history remains  unknown to many. Therefore, from Ser Argentino  we tell it, remember and applaud.