We collected the voices that lived the war from within and remember the exploits of the commandos who fought to recover the Falkland Islands and take care of their companions in the attempt. 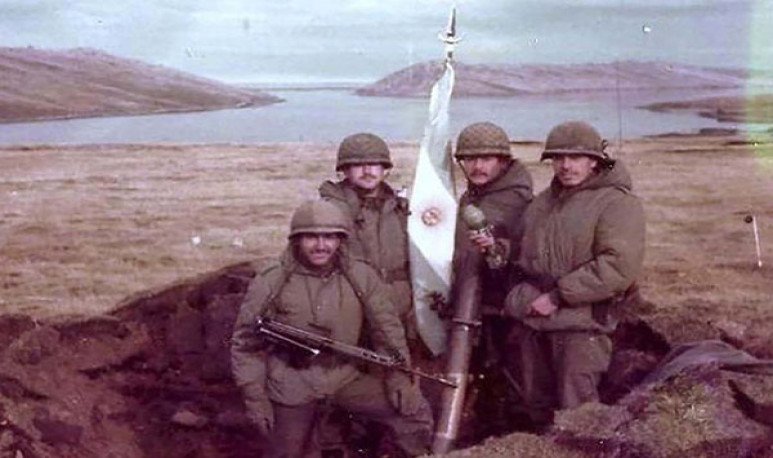 Howard was a small port, located  on Gran Malvina Island , on the Strait of San Carlos.  It was a hard-to-reach place, inhabited by a small population that was kept informed by British radio repeaters. Howard, in addition to being a place without television or primary or secondary education, was  the whereabouts of thousands of young Argentines suddenly turned into war soldiers.

This port  was the refuge of the Infantry Regiment 5 (RI5),  which would become one of the units that most resisted  isolation, desolation and desolation.  With  scarce and numbered ammunition and food reserves  , life in this place was  pure survival.   Howard was renamed Puerto Yapeyú in honor of the town where José de San Martín was born. In this place, from the beginning, they were handled rationalizing food  for obvious reasons. But the passage of the days indicated that the time was coming  to stock up again...

Alberto Miñones Carrión was then a young second lieutenant,  who was in charge of the Support Section of Company A of the RI5  . About this time, he recalled: “From the first day we arrived,  we knew that the provision would be difficult,  to such an extent that the one we expected a day later never came. With the running of the days it became more complicated, and with  the arrival of more people  it was really critical.”

Little by little,  the port was taking care of: First, a company of 130 was established, to which two other infantry companies in the regiment, two sections of engineers and health elements would be added. In short,  about 800 men in that little overcrowding.  And they all depended on the vessels or planes encouraged to carry out  the supply missions.

Wait and not arrive

On one of the trips destined to supply Puerto Yapeyú, an Argentine ship was attacked and never arrived . The news came in the form of signs, and signs. On the day the ship did not arrive,  those who were on the mainland discovered  pappallos floating very close to the coast.   These events worked as  harbings of an imminent defeat.

“ Cooking a lamb was complex, as the fire was made with peat, which has little caloric power; and  we only had two field kitchens for 150 men.   But the cunning and expertise of the quartermaster staff made 200-litre drums of oil washed and thus  ate fuel-flavored lamb stew.  Warming up those drums  was very difficult.   And the fire   was supposed to be out most of the day , “  Hugo Gargano, deputy deputy of the Quartermaster of Regiment 5, explained to the media.

By the time supply problems began to worsen, Hugo Gargano was in Puerto Argentino looking  for the means to reach Gran Malvina . The head of the RI5, Colonel Juan Ramón Mabragaña, insistently demanded the presence of this second lieutenant. In one of his  working days , a colleague told Hugo that  Howard needed him  and that his regiment chief claimed it.

“ The next day, they went to pick me up with a vehicle. 'You have 15 minutes to be in Moody Brook and get  on a helicopter that is about to depart for Howard with food, weapons and ammunitions, 'they told me,” Gargano recalls and still shudders remembering the fervor of that & eacute; little. Finally, he performed in Puerto Yapeyú  with Major Roberto Yanzi, Army Aviation. 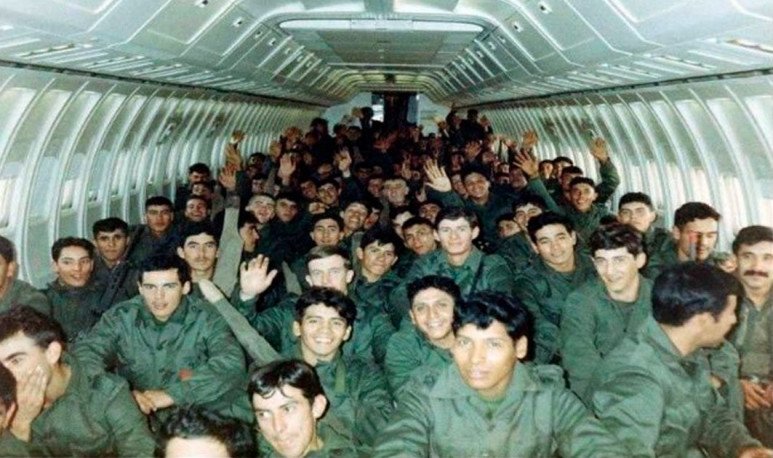 Yanzi also travels with memory:   “We had to take advantage of the trip.  We load ammo, mortars and meds. And we also took two soldiers from Regiment 5. Three Puma helicopters would fly and in the tail, as custody, an Augusta, who was gunned.”  The trip was risky, because  the day before the English had landed in San Carlos . The seven or eight minutes that would require them to cross the strait could be lethal. In addition, the weather conditions at the time were bad, but  the need of their compatriots was more important.   So they gathered courage and, organized,  set off on that saving mission . The first helicopter was piloted by  First Lieutenant Hugo Perez Cometto,  the second by fellow  First Lieutenant Enrique Magnaghi  and the third by  Yanzi.

Getting to good port

They started the journey, attentive, and just as they  were about to finish crossing  the strait,  two Sea Harrier attacked.   Between maneuvers, adrenaline and despair  managed to save themselves.  After the attack  , wounded, but full of life, agreed to continue to finish the mission. They took off in the hope of not being hit by enemy ships when they arrived in Howard. Radio Cologne reported that Harriers had shot down three helicopters, but  what they didn't know was that their pilots were alive.  Yanzi recalled,  “When we arrived it was a great joy. We hugged, we  were all alive.”

Yanzi, Gargano and Magnaghi lived to tell.  Today, they remember their exploits and are excited with pride. The aftermath remains evident, but the love of the homeland remains valid and, little by little,  the still open wounds  are closing with the power  of a people that  embrace them as ex-combatants and veterans of war.