Home People Stories of people Everyone can play

Zoe is 10 years old and is a footballer. He launched a campaign in which he collected booties so that other children can play as well. 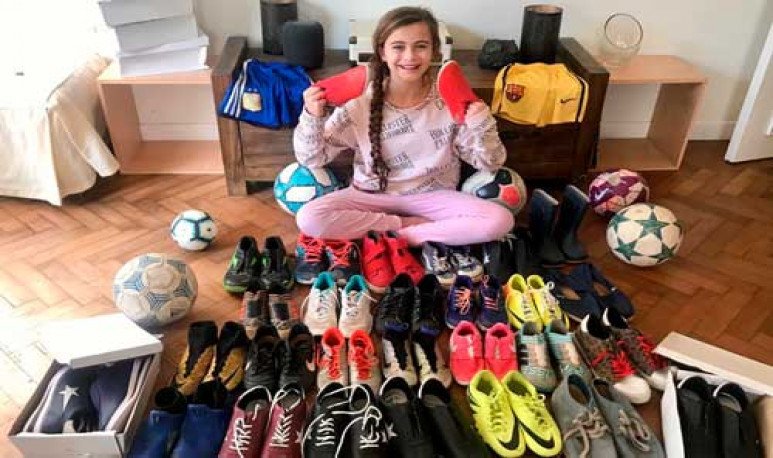 When we're kids, we often have no idea that there are other realities that are very different from ours. Our universe is our home, the school and the people we connect with in our most intimate circle. Gradually, we are noticing that there are many other people who do not have the same fate.  Zoe Puente  is 10 years old, a great  football  career in power and, most importantly, an enviable empathy and a huge heart  .

What she enjoys most in life is  playing football . And he breaks it. He plays in Tigre's Roma club and  Platense's U10 . Sometimes they even invite her to participate in larger categories. But, at one point, Zoe realized that not all boys have the possibility to enjoy the sport like her. - Why? - Why? Because they don't have shoes.  “ How can they play when they're barefoot?” , one day she asked Daniela, her mother. And, from this question, arose in it the natural need to do something to change that.

For his own motivation, he decided to  organize a  solidarity  campaign to collect ankle boots and shoes , with the aim of donating them to children and young people in neighborhoods vulnerable. With the help of his parents, he got to work. Based on a slogan she herself devised — “ Everyone can play ” — she published her order on social networks. His intention was to mobilize family and friends to join the initiative. However,  the campaign was widespread  and, in less than two weeks, managed to collect  more than 120 pairs of booties and sneakers.

The idea was to go with the people who had donated the shoes to give the boots to the boys in person, but the health situation associated with the coronavirus prevented it from doing so. Anyway,  she herself went along with her family to hand over the donations to  the authorities of the Hogar de Familiar Esperanza para niños en tránsito (Boulogne) and La Cava.

Love for the ball was born in Zoe when she was very young. First it was with his older brother Tomás, whom he accompanied to classes at  Claudio Marangoni's school  in San Isidro. One day, one of the coordinators invited her to join the men's team. But Zoe wanted them to open the little school for women, which later happened.

Then he started playing at the club Roma. And, in October last year, she was invited to participate in a “mundialito” to Chacabuco, with the category of Under 10 of Platense. Zoe showed off in the tournament and ended up as a scorer. Currently, she continues to play in those two teams and sometimes invites her to play in larger categories.  Her height and technique make her stand out even among girls bigger than her.

Zoe is a Boca fan and has two great idols:   Lionel Messi  and Alex Morgan , the US lead. In honor of her she chooses the number 13 shirt to play her matches. In addition to being innate talent, the girl is highly disciplined, both in school and in sport.

But what stands out for Zoe is his big heart. After the campaign where he collected shoes, he is thinking of receiving balls and toys for Children's Day. In addition, thanks to her  solidarity action, she now has an invitation pending: the boys who received the booties she put together  invited her to play a little  game with them, as a thank you. Because in life everything comes back, Zoe has assured a future full of nice things.