Eduardo Bernal has been part of the sports and teaching tradition of Comodoro and other Chubutense peoples. 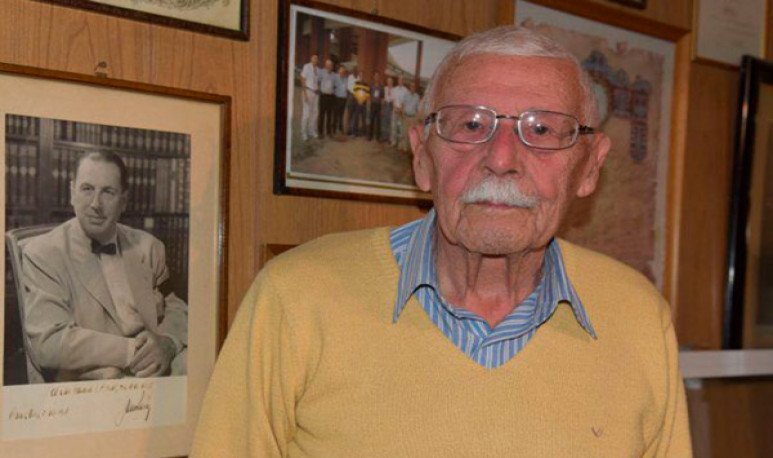 Eduardo Bernal is 98 years old and represents much of the history of  Comodoro Rivadavia  , the town in the province of   Chubut   who recently commemorated his first 120 years of life. In just under a month he will be launching “Remembrance of a long way”, his fourth and own book after “60 years of sport”, “Reminiscences” and “Mission accomplished”.

Bernal  has been living in Comodoro for more than 50 years: he bequeathed from  La Pampa  at the age of 17  and was appointed teacher in School No. 3 of  Las Heras , in  Santa Cruz . Eduardo had practiced both in athletics and   basketball   and “since there was no physical education teacher, he himself took care of it. So along with the books came the staging of the sport. Understanding that both, education and  sports , make the person's integral training,” he said.

He later lived in the   Cordilleran   city of   Esquel   and then, was appointed by the   Army   and thus arrived in Comodore, during the time of Military Governorate. And he never left again.

After his time in the militia, when he was dismissed, he got a job at the Giobbi transport company, where he worked for 35 years. However, he did not neglect sports and teaching. “We were very linked to the sport part. I played basketball and did athletics. I worked as a leader for many years in Gymnastics and Fencing,” he said. He added that, when he arrived in the oil city, there was great enthusiasm for the sport “especially it was mobilized by  YPF , and had mobilized it as well ; n in the times of military governorate who was the first director of sports here in the region, Simon Silvestrini”, showing how Eduardo has gone through various historical and political moments, democracy and dictatorships.

Bernal was part of the initiation of the Athletics Federation, at that time called “Comodoro Rivadavia” since the military had the Governorate that understood beyond the boundaries of Chubut and Santa Cruz that we all recognize today. Finally it was “provincialized” and in 1964 a tournament was held for the first time in a city outside Buenos Aires, Rosario, Cordoba. Comodoro was elected and, in addition, it was the first time that the Argentine Confederation participated with all the affiliated provinces: in the headquarters of Gimnasia y Esgrima: “Even last week they warn us of Buenos Aires that they were not going to come because he had not got the subsidy to pay the trip, we paid them the round trip by plane,” said Eduardo.

Eduardo Bernal has been part of the sports and teaching tradition of Comodoro and other  Chubutense peoples: “When the provincial education system is created and competition is called for school No. 1. I showed up, won the contest and was working as a teacher in the 1", he recalled, starting to teach in the “shed of the rural” and then moving to the subfloor of courts, among other schools in the oil city.

Homage to the trajectory

Bernal was summoned to work with the Argentine Athletics Confederation  (CADA), for his commitment and work in the Chubut Athletics Federation, and so he also witnessed and accompanied Argentine delegations in different Olympic Games since the day and at  the same time. eacute; each of the eighties.

To be a sports leader was also to manage with other organizations and companies, for example the Km 3 athletics track, where YPF achieved a new mix for the filling of the track with Rio Chico sand in its laboratories, something unprecedented for that time; the municipal gymnasium No. 1 and also the second.

He was director for Argentina in the South American Confederation from 1979 to 1989 and vice president of the entity from 1989 to 2007, when he was appointed honorary vice president for life. Eight years ago, in 2013 and at the 9th Congress of the International Association of Athletics Federations (IAAF), he was recognized with the Merit Square of the world entity, being the first Argentine to achieve it.  For almost 10 years, that Comodoro's athletics track bears its full name: Eduardo Nicolás Bernal.  The sports tradition of national athletics is  comodorense .