Home People Stories of people Cristian Firmapaz and his SUV

Cristian is a pulpero in Las Grutas, and went viral because of how his van crossed the coast of the spa. 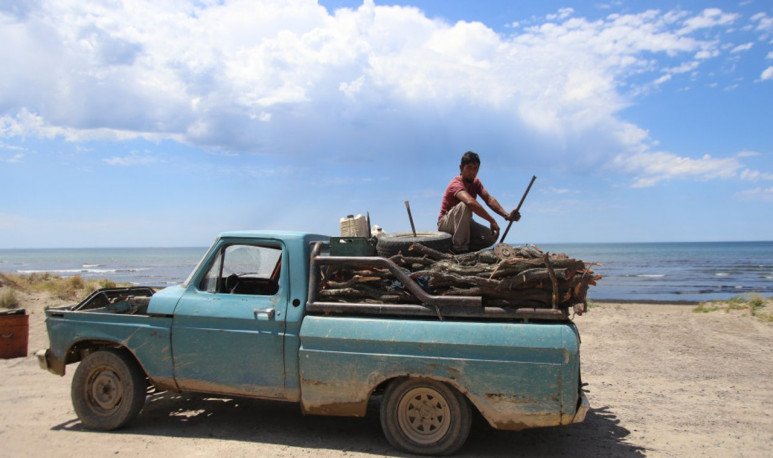 In a time where repairs to various everyday objects are part of our lives, a video has been viralized that has occurred in the last days of December on the beaches of  Las Grutas , province of  Rio Negro . It has nothing to do with the coronavirus or occupancy percentages with the 2020/2021 season, of which it will be as atypical as this action:  an F-100 van , without even hood and with several years of use, was made space and path between sand, rocks and water that was going going up.

A 46 year old Ford F-100 truck was not stranded and several new vans, ATVs and other “typical”  beach transport: it all started with a  4x4  stuck and with various other vehicles going to their rescue. Suddenly, a particular and out of the usual sound of the new generation of cars was heard: this “chata” was made way in high seas to reach (more) solid ground.

Although it is recognized that this activity, that of going down to the beach with vehicles, is prohibited, it is normal to see people -more than anything local- who perform it; knowledge of the particular terrain of the rionegrino spa is essential to avoid suffering consequences and be stranded when the tide begins to rise.

The owner of this old iron between the waves is Cristian Firmapaz and is an artisanal collector of  octopuses  : although social networks did their thing for a viralization and supports this van, for him it is something usual. In a journalistic note about what happened, he commented that messages began to come to him because he was “famous on Facebook”: after a long day pulping, he knew how he had to get around the bank of El Sótano, one of the many beaches that make up one of the most popular cities important of the Patagonian province.

Cristian is part of a   family tradition , given that his parents, his uncles and now together with other relatives do this seasonal work: as octopuses come to the shores between November to April, May at the latest. An activity, moreover, that demands hours and hours under the summer sun. Before he leaves, they are already located, thanks to their pickup truck that always accompanies him. He recounts that few times have been that he has left him on foot, and that any inconvenience, he fixes it. Not only is the F-100 all-terrain, but also its owner.

Cristian's knowledge also made that, as seen in the video, everything is calculated “millimetrically”, as it is performing zig zag. That the high level was not so energetic (they can reach two meters in height of the ravine and makes it impossible to move forward) helped. Firmapaz says that a misplaced change or driver error, can be a catastrophe. “It happened to an acquaintance who stopped his engine and covered it by the sea. He had to completely disassemble the van. Wash it well with fresh water and open the engine, because sand enters it,” he says.

The video reached millions of  views on different social networks , not just on Facebook: Twitter, Instagram and even large national and international media. You've even been written from other countries to congratulate you. Thus, one of the typical summer activities of the Las Grutas spa has reached the mouth of thousands and thousands; for a moment, people have forgotten about a pandemic, the economic and social difficulties that this new virus has caused and have collectively celebrated an achievement that, for Cristian Firmapaz, is something everyday.

But the story does not end there: from Ford, they contacted our favorite pulp perp to offer him to restore his truck and, while that happens, lend him another vehicle to continue to do his job.