The Crazy Banderita was not only a great creation by Cacho de Villa Urquiza. It was the inimitable personification of the fan's passion that holds more than just a game. 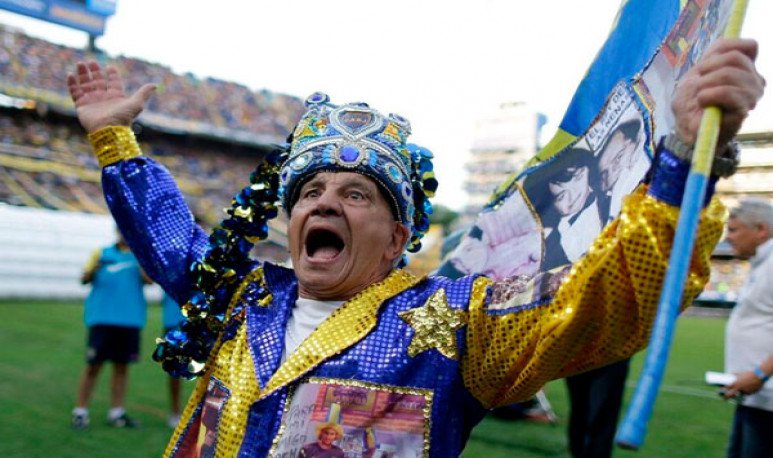 The box, the roast, the trick, the family, the murga and the puffy of Boca,     The Twelve,     are in mourning in Argentina. Oscar “Cacho” Laudonio, the famous “Crazy Banderita”, who flamed the xeneize flag at the exit of the tunnel of the Bombonera, will not be firm in the next match   . National symbol of the fan, in his three “unique” costumes embroidered with popular idols and images of the Falkland Islands, deep down the feelings and values of the neighborhood. Sacrifice, friendship, love and joy conveyed from his time of requested box teacher and that they arrived at informal talks, in his role as a prop, with players from all divisions of Boca.   Viveza, Cachito, El Loco could lose a round with the damn coronavirus but won the fight by encouraging from the board with a tempera of iron, loyal, solidary “Wonderful”, “Spectacular”, “Apotheotic”, “Extraordinary”, that was the Crazy Banderita.

He was born on September 15, 1936 in Parque Chas within a large family, nine brothers, and a municipal employee dad, sweeper of a fair in Triunvirato and Mendoza. Inaltable roast every sunday”   I grew up in a beautiful home, where there was plenty of home warmth,” Cacho recalled in Augusto Famulari's documentary.   As a teenager he collaborated with his family at that municipal fair since four in the morning, and his neighborhood friends, who accompanied him all his life, dubbed him “Viveza” because of the picardías between stalls and inspectors. At that time his father Angel, an Italian immigrant, was a good friend of the famous boxer Jose “Cucusa” Bruno. So it didn't cost too much for his sons Oscar and Abel in 1946, lovers of pine cones and neighborhood clubs, to start training at Club Parque Chas, with a featherweight champion, and Villa Urquiza pride.   Cacho also threw the porteña murga, participated in several comparsas in the neighborhood, and until his last years he danced in     The Fantoches of Villa Urquiza and the Murga Los Innocents Center. Carnival ran in his blood as did his love for blue and gold.   Known to Jorge Gorena, leader of the bar of New Chicago and Boca, in the early fifties he began to follow the club of his loves, and sometimes traveling to the interior of the country on the roofs of the collectives.

At the same time boxing was becoming a full-time profession, Cacho finished elementary at night, and gets a job at Correol, where he spent almost thirty years between messenger, in charge of carrying telegrams “good and the others”, and teletipist. One afternoon in 1954, when they were recognized semifonists in the “Cucusa” fights, comes one of the first important opportunities for brothers Oscar and Abel, an exhibition fight before General Perón during a halftime of a Boca-River. And not only did they get to say hello to the president but they asked for a bicycle and Perón got them a house in San Martín”   The sport, the box, gave me everything. That's why it is important to get the kids out of drugs and paco”, he repeated when he was already visiting him as a box teacher in his brother's gym in front of the Comunicaciones Club   -there he got to train   Carlos Monzon   , and films were filmed with Jorge Porcel and Palito Ortega. Cacho also acted as “torrante” in “La barra de la esquina” with Alberto Castillo. The following year they must decide between brothers the Novices Flyweight Championship and Don Ángel says, “Cacho, between brothers can't fight, it's not good that they fight,” said Oscar, “and well, we do what you want, Dad.”   And face and cross in the living room of the paternal house was decided the first championship for Abel, who would be one of the great Latin American boxers, champion in Lima in 1958, and winner of the bronze medal in Rome 1960. And of the few who defeated Nicolino Locche in the   Luna Park,   in one of the most anticipated duels of the sixties   . 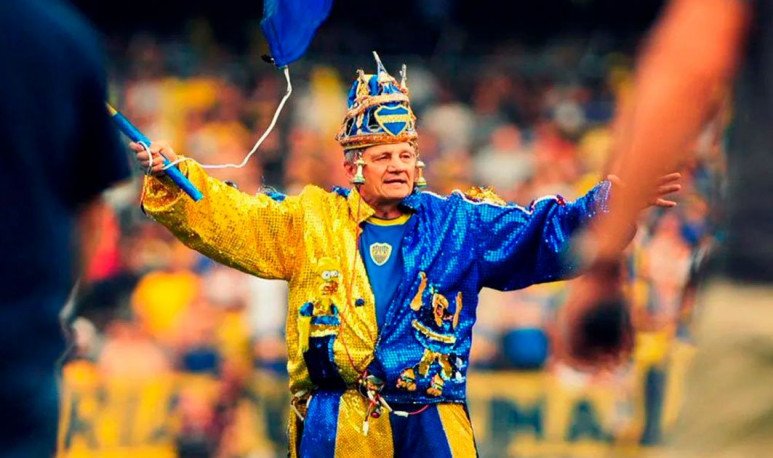 Cacho continued to try boxing until in 1959 he lost his chance to represent the country at the Pan American Games and is encouraged to try his luck in Europe,”   His friends at Club El Progreso, in Villa Urquiza, had gathered coin after coin. He had rifted to his portable radio — by then, a rarity — until he gathered the 12,000 pesos of the passage. He was finally able to do it with Oscar Perretano, a professional boxer, who had got a contact in Genoa,” Carlos Irusta said in the magazine El Gráfico of the 1961 tour that took him to Italy, Spain, France and the island of Melilla, in Africa.   There he receives a tremendous blow to his nose - it would be flat, his inimitable feature along with the smiling on and an enviable physical state - and pushes him back to Villa Urquiza into the arms of his beloved Mary, mother of Monica Lucia, who gave them two grandchildren - Marina and Gonzalo -, Alejandro Martín and Gustavo Angel.

Cacho Laudonio holds the record of 62 amateur fights (23 won by points, 29 by KO, four losses and six draws) and seven as a professional in Europe (five won by KO, one by points and one lost by abandonment) On his return he tries a fleeting return to local boxing but leans for retirement, defeated by Roberto Palavecino in 1962.   From that decision he specializes in boxing teaching,”     I dedicated myself to what I always liked in my life, teaching”, he said,     first in the mythical Almagro Club, and then for decades in the Box Federation, where he was assistant to the remembered Nicolás Preciosa, who was manager of José María Gatica. Sparring of champions, including Ringo Bonavena, was in the coaching staff of several challengers for the world title, to name Jorge “Locomotora” Castro   . The last was Sandro Vázquez fighting for the championship in Holland in 2003.   And precisely the gloves were the gateway to the institution of La Ribera, as he approached as a youth box instructor in the eighties. The story of Loco Banderita was about to begin.

On that trip through the Atlantic, Cacho to entertain the passage had disguised himself as a woman and sang” Siam Lambretta here/ Siam Lambretta there/One million Siam Lambrettas/invaded the city/Miguelito de Molina -Spanish singer celebrated in the 1950s said truthful/If I had Siam Lambretta, he would be reversing” Forty years later he would sing the same murguera melody at the 2000 Boca Intercontinental Cup celebrations.   But to get to that story Cacho, after teaching youth boxing at the Bombonera gym, would be able to work in the club of his dreams for a management of Antonio Alegre in 1985. First it was entry control and ended in Props around 1990.

Cacho Laudonio was now close to the first players and Reserve, arrived at six in the morning and prepared the balls and water with the care of a craftsman, count former players, and did not miss one of the matches in his beloved Bombonera.   It was the greatest thrill of the fan being on the same lawn. But I felt that something was missing to fulfill his maxim, “Since you came into the world, I lived life.” Until that moment the entrance of Boca was anticipated by Mocolita, a man in beige suit. Cacho seemed solemn and tried to adopt another colour but Mocolita held in his thirteen until his death in 1994. The time of the Loco Banderita had sounded “Boca is village, Boca is joy, Boca is carnival carioca, Boca is murga de barrio   “Chacho thought and dressed with Irma, the dressmaker of Villa Urquiza, with the striking Levite Murguera and the flag that “weighs like 500 kilos but seen from the popu”, commented on the rag that has Perón, La Raulito - Maria Esther Duffau another renowned fan xeneize, also born in Villa Urquiza- and Maradona, among so many (   which we hope will be in the so-called Laudonio Museum in La Bombonerita, a space of photographs of Cacho with personalities from the political, sports and artistic environment. The Crazy would surely like...)   About whom he could have put the nickname, or at least popularize it in the late 1990s, one may be Alejandro Fantino who included in his story the “Loco Banderita” every time the first division team of La Ribera entered.

”   I love Boca players and they love me. Is it Boca? Then he's with the “Crazy Banderita”, his ultimate joy,”   confessed to   www.periodicoelbarrio.com.ar   in the two thousand, who was the number one fan of Boca, figure as dear as Martín Palermo or Juan Román Riquelme.

The statue of the Cacho is coming, it's coming

“I can't ask them t-shirts, who have so many commitments, I must set the example and not ask, because the greatest joy I can have is, simply, to be with them, to be their pimp, as some say, make them laugh — it's beautiful to be a clown! — and feel friends with them” I recognized Irusta in 2010. Laudonio accompanied the 2000 and 2003 world champions, once invited by Carlos Bianchi, and again by the same players - and in 2001 Boca lost the final without him.   He was present in all the decisive parties of the   golden decade of his club (1998-2007)   , with Boca becoming the club with the most won tournaments in world football, less a couple of months in 2005.   Cacho was sanctioned for assaulting a Mexican Chivas player in a Copa Libertadores match.

Laudonio continued to work in Boca until in a confusing incident in 2018 he disconnected, after almost 30 years of joys and sorrows in all divisions, in all sports.”   They will make me a monument in Boca, they will put me next to Palermo for the day of the fan of the fan” said Cacho who received the late apologies from the institution, despite the support of   Diego Armando Maradona   and Carlos Tévez.   He died last March 22 due to complications arising from the coronavirus”   The fulbo fan (sic) is the nicest thing there is. I love all the puffies in the world. I tell you more: I wish every swollen has its own “Crazy Flag,”   He stamped every note with his favorite volley, Cacho Laudonio who signed autographs on par with his team. I hope Cacho, you were the flag of the most beautiful football, the passion that unites us. 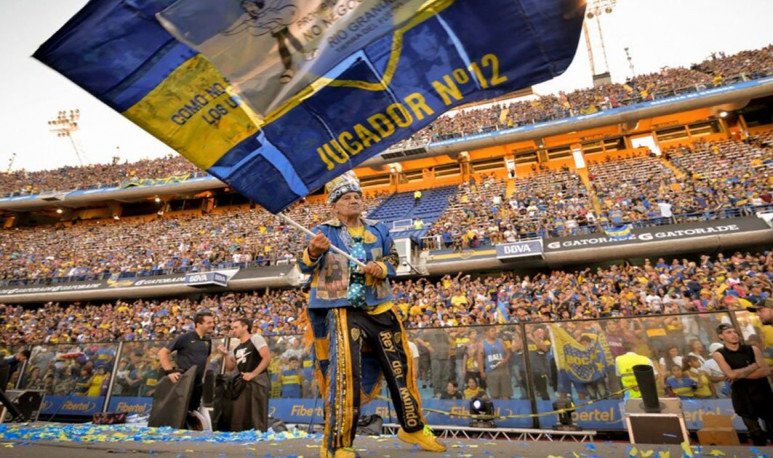