Paul dedicated his life to catastrophes. Today he left everything to fulfill his great dream: to start a single parent family. 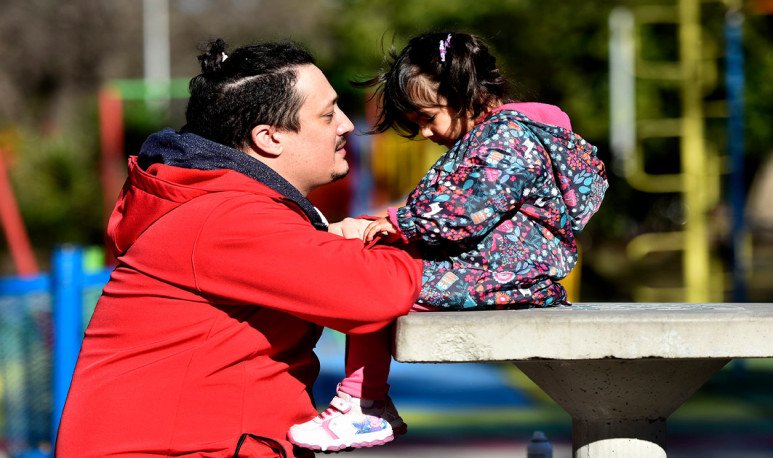 There are people who are born with a mission:  to change the world . Often they are anonymous people, in a world that values a  musician  or  footballer  as heroes. But it is really they the heroes, those who  give their lives for others , who put the body, mind and emotions into saving those who go through the most difficult situations. They were born to save the world. If they have not yet achieved it, it is because there are few, very few for the number of disasters — natural and others — that explode day by day around the planet.

Pablo Fracchia   spent his entire life working on catastrophes  , inside and outside the country, accompanying people who suffered floods, fires, wars  . He supported them, held them, left everything aside for being anywhere he could add up. At the same time, he waged his personal struggle, which had to do with his sexuality and the social conditions it imposed on him.  Pablo also played an active role in the strategy to achieve the Equal Marriage Law 10 years ago.  But all this happened to one side when in her life there appeared  My , the daughter who always dreamed of.

A life of catastrophes

It was  two decades  that Paul dedicated to intervening in disasters and humanitarian crises. His vocation woke up in his adolescence. At the age of 15 he signed up as a  volunteer firefighter . At 16, he started working with the  Red Cross . He first thought he was a doctor, but then decided he could help from another equally important role. He studied  Social Work , while working as a volunteer in catastrophes and in the day-to-day life of the towns of Buenos Aires conurbano.

Some of the tragic events he participated in are remembered by everyone. In 1999, it provided psychosocial support to the families of the victims  of the LAPA plane crash . In 2004, he assisted the families of the  victims of Cromañon . Here I would like to highlight one detail: Paul is 37 years old, therefore, by the time those events occurred, he was 17 and 21 years old, respectively.  What did you occupy your spare time at that age?

With the 2001 crisis, a young Paul also intervened in the  villages of Quilmes  to bring some restraint to children and adolescents who lived in a  situation of vulnerability.  In 2003 he was in the worst  flood in Santa Fe,  organizing logistics. In 2009, he helped train volunteers in the  avallion in Tartagal , which buried much of that city in Salta with mud. In 2013 he participated in the terrible  flood in La Plata  and, in 2015, in Clorinda (Formosa).

However, his most mobilizing experience was lived in  Lebanon , where he arrived in 2016 after being summoned by the  White Helmets to collaborate with the Syrian refugee crisis. There he saw what, for him, represents the worst of humanity. In 2018, he attended his last catastrophe, with the  flood of the Pilcomayo River in  Salta .

Inside, however, he also felt vulnerable in another sense: it was not hunger or violence that afflicted him, but  feeling different . To believe that their desires did not follow the norm. To think that his sexual condition would prevent him, in the future, from fulfilling his great dream of being a father. That's why, in parallel with his volunteering assisting in disasters, he campaigned for the rights of sexual diversity from the  Argentine Federation of Lesbian, Gay, Bisexual and Trans . Through this body,  he played an active role in the enactment of the Equal Marriage Law  in  Argentina .

Paul fought so that same-sex people could get married, but not for a personal matter. In fact, over the years, he decided that he wanted to be a father and that that should not necessarily happen within the framework of a couple. That's when he signed up for Avellaneda's Family Court number 1 in order to  adopt  a child, knowing that, being single and gay, he was going to be last on the list.

For two years, that dream kept him in a vilo. Until one day, in October 2019, his phone rang. From the Court,  they were looking for a home for Mia , a 1 year and 10 month-old baby who had survived death at four days of life and  had spent a year living without a family in a hospital in La Plata . When I was a newborn, she had an intestinal perforation, had a colostomy, and had gone through a second surgery.  The postoperative period went through it alone : no one in his biological family could take care of it.

They told Paul that the applicants for adoption were five: four straight couples and he. Like who goes to an already lost  battle  , Pablo accepted the interview. He attended with his mother a few days later, and they left without much hope, but soon Pablo's phone rang again.  He was chosen to be Mia's dad.

From then on, the life of the two became one. Paul turned his “gay bachelor” home into a single-parent home, in which Mia has plenty of laughter, games and love. He learned to walk and talk. Every time he hears her say “Dad”, Paul knows that every step of the way traveled to her was worth it. She knows that, with her, the world is also changing.