What follows is the talk with Agustín Sena, a man of extraordinary simplicity. I figured out why I say beautiful is simple. 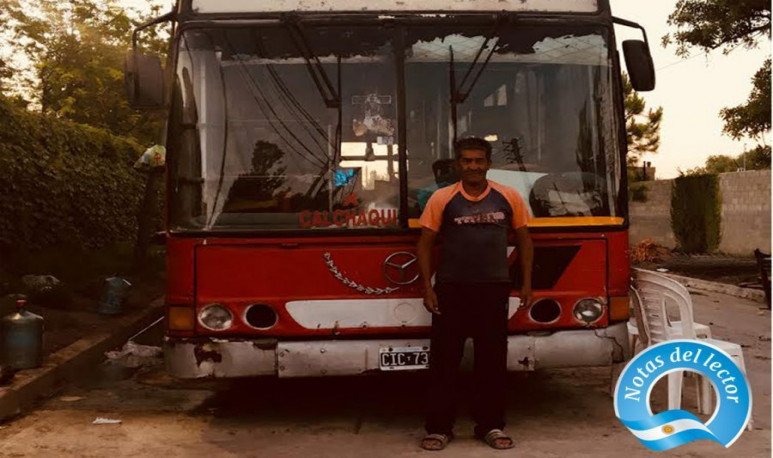 Dersu Uzala  or The Hunter  is the name of a wonderful book by Arsenyev that was later taken to the cinema, directed by the great Akira Kurosawa. He told the  story of an ordinary man , a hunter and his simple life. Beautiful is simple.

What follows is the talk with  Agustín Sena  or “El Sereno”, one might say, a man of extraordinary simplicity, acquired over the years and that many would like to be able to reach someday.

Born in Santa Ana,  Corrientes , Agustín left his hometown and came to work in Moreno, Buenos Aires province, leaving behind a girlfriend, hens and rabbits. The running from the water of the rivers and the beautiful sound of the springs also remained in Santa Ana, but they were brought into her heart.

This 47-year-old man with sun-tanned skin and pavement work lives with his sister and his three nephews who are like his children. He's single and unhurry.

Do you believe in  love ?

I was in love in Corrientes. I was working and the bug stung,” he says with a laughter. I was two years and then I wanted to come here and she didn't and no mess, life. I missed my family too.

Now he's serene and he's serene! What was it like to work on asphalt? They say he's one of the hardest laburans in the heat.

That happened to me: a lot of pressure, stress, the companions themselves were mistreating me because the heat is unbearable and irritating. The pay was good, but I couldn't take it anymore, now I'm quiet, I live in the  collective  here...

It's nice, it's like a house: I have bathroom, piece, TV, fridge, everything in a home.

What was he dreaming about a boy?

She smiles and says, “I dreamed I was going to be rich and never was.”

And today? What floods him with happiness?

No money, because I know it's not good to be happy. It gives me joy to be able to work and help my family.

Today's World... interrupts me almost as protecting me from his own answer and in the blink of an eye spits: “Crazy, re crazy. People are: some crazy and some crazy ones, so it's like everything, if they hump me, I'm going somewhere else. If they irritate me, I grab my stuff and rumbeo the other way. I, if I don't work, I don't eat, but I know I can get somewhere else.”

What a wonder! A free, happy and peaceful being, with what he has on.

I never went, but I'd like to know  the sea . In Corrientes he was going to the rivers.

Does poverty have a solution?

Governments want everything for them, they always throw more for the rich than for the poor.

He doesn't say it resigned, no. There is wisdom in his words. And conviction.

What do you think of violence today?

The violence? Increasingly crazy, silver puts people aggressive, they want money and they go crazy. The drug too, they want more and more... I was stolen by rabbits and chickens when my old man died. They stole everything from me.

I love rabbits. Chickens, please don't laugh, I'm afraid of them. And obviously, he couldn't hold a smile from ear to ear that made me laugh like I wasn't doing it for a while. We were silent. Sharing in the middle of the street cut, sitting on white plastic chairs. A breeze adorns that wonderful moment of shared loneliness.

I live the present. I like watching TV, I love TV, series. I don't like football, I watch  cartoons  with my nephews, that makes me crazy.

His voice brought me back and I resumed:

What do you value in a person?

I appreciate the value of sincerity, being honest would be best, but there are many fake people who say hello and behind you are beating.

Do you believe in the value of the word?

No, I don't think anymore. They failed me and I don't give second chances.

For me it doesn't exist, that's where I'm wrong...

Now I'm the one who can't stand and long a brutal but sweet laughter: But in what sense? Do you think he's not going to die?

Almost choked at the laughter, he answers me: Yes, I meant there's nothing. I'm dying and ready.

Augustine, the man who loves life to be calm and have work to give his family a hand, so that his nephews have education. The Sereno who rides on a bike, walks and who, in spite of everything, has  hope .

I like silence. I don't know, it's better, nothing else.

Derzu Uzala. Augustine. Two men from places even in planisphere far (Russia and Argentina), but with one quality in common: the simple.

I turn off my engraver and I don't hold my crying.

Paint with the heart