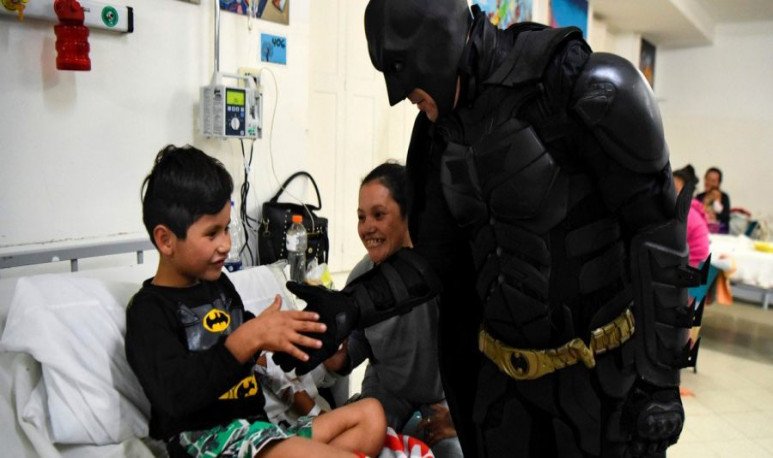 A man who devotes his time and his love to comfort those who need it most and a group of men looking to reorient their lives came together to carry something that is very needed in those times: joy. The Batman Solidario of the  Children's Hospital of La Plata  will deliver sick stuffed animals made by prisoners.

It is known as the Solidarity Batman.  This man  visits the Children's Hospital of La Plata every week to bring donations and entertain  patients . His next mission is very special: he will carry about 30 teddy bears that were made by prisoners from the prison of Olmos.

The Buenos Aires Penitentiary Service specified that inmates of Unit 1 produced and donated 30 stuffed animals to the Batman Solidario de La Plata, in a meeting held in the chapel of the Children's Hospital Sister Maria Ludovica. The stuffed animals were made in the sewing and leather goods workshops of the prison establishment. Interns Gerardo, Edulfo and Juan Carlos worked with pieces of fabric and leather to shape the bears.

“This initiative did us very well. Thinking about what we are going to provoke  smiles  on the babies who receive the stuffed animals makes us very happy. We feel useful to society. We are taking advantage of this period of deprivation of liberty to learn trades and prepare for a job when we return to the street,” said Juan Carlos.

Batman platense sent a video to the inmates and stressed that what they did “is a wonder.” He thanked them and promised to deliver the donation “in hand to the kids who need it most.”

“There are no first or second patients”

The Sight in Tonga

Defeat of “The giants”

Messi is The Best