Home People Stories of people Art in the most extreme poverty

The solidarity of a Santafesina who provides art workshops in poor neighborhoods of her city took her to Ethiopia, where people don't even have water. 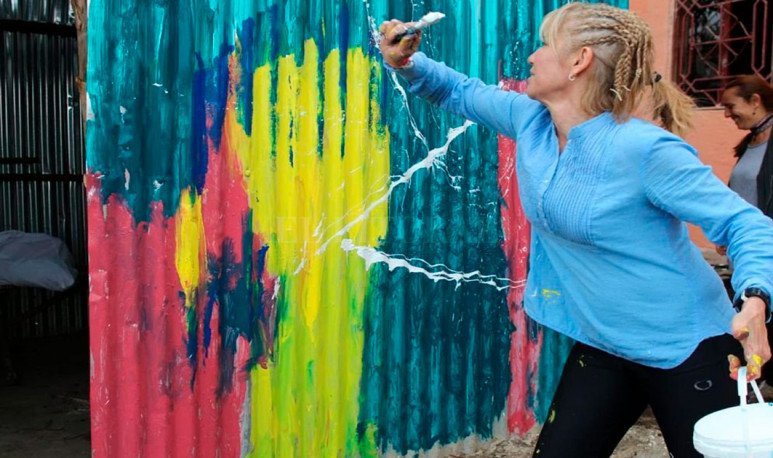 Gabriela Garrote is a Santafesina plastic artist. But, more than that, she  's one of those restless people.  Restless, with that always positive concern. Gabriela, whom we will now call Pisca, as everyone knows her, channels her almost physical  need  to be on the move in solidarity. All the time he embarks on projects to lend a hand, or both, to those who don't have a good time. She does it in her closest environment, or where there is a need in the world and she can commit. Her training and talent led her to be an outstanding teacher of Art. She also has a career in public management, where  she became Secretary of Culture  of the Municipality of Santa Fe.

So this  Santafesina , without looking for him, but following her solidarity concern, went to find a scandalously poor community in Ethiopia. There  he generated such a great human link , whose history of social commitment we will tell you in this note.

It seems untrue that, as early as 2020, there are countries where a large part of their population does not have access to a basic element such as water. In Ethiopia,  thousands of people  live with diseases and all kinds of risks every day , because they do not have the resources to be able to sanitize, wash food, or simply hydrate.  Getting water, in these places, is an arduous task  that men oversee, but women carry out. They walk miles with a 30-litre canister on slopes. Women who, on the other hand, become  “mother girls” at the age of 11 or 12 for being abused  inside and outside their families at a very young age.

Solidarity is an art

Accompanying his daughter on trips, Pisca was surrounded in Madrid by a group of people who actively collaborates in   Fundación Emalaikat .   It is dedicated to promoting the creation and development of sustainable aquifer resources on the African continent. Within this organization, and led by a Catalan nun who lives in  Africa  30 years ago and 10 in Ethiopia, more than 30 women work for Ethiopian tribes to have water in a more accessible way.  Each well that is built serves to supply 250 people.

From that moment on, and moved by the stories she heard, Gabriela wanted to start helping.

First, Pisca started the group “Los de la leche” in Madrid. It was made up of friends who bought milk cans every month to donate to that community. Then they got to buy a dairy cow! and chickens. With them they provide children with 17 litres of daily milk and eggs, to continue to collaborate to have a balanced diet. But, also, keeping these animals alive is only possible thanks to the fact that they have water.  The foundation was able to give all these people access to an  essential resource for life.

Gabriela became increasingly involved with these stories and felt the need to be there, and help through what she herself calls as her biggest capital: art. With all the desire to tow and fifty kilos of chocolate  alfajores  inside the suitcase, he embarked on one of his many trips from Santa Fe. In Madrid he bought 250 brushes and in Ethiopia he got five cans of paint: red, blue, yellow, white and black.  For three weeks, every morning he woke up and went to visit a different tribe.  I just wanted to get the kids to experience art.

Without words, the boys in the Ethiopian community and  she communicated  through the colors    and physical conta   cto  . She wetted her hands red, and when she caressed them with theirs painted yellow, orange appeared. These discoveries  were reflected on any surface that could be intervened : a floor sheet, a cardboard and even the walls of the community dining room exploded with creativity.

On the return of her trip, Gabriela took advantage of the inspiration and desire to continue collaborating. He painted a series of watercolors that he then sold and allocated the proceeds to the construction of water wells for the boys.

In the face of stories like Piska, there is never the one who complains.  Onda: “But why does he not help instead of going to Ethiopia  in the slums of Santa Fe, where you have such a bad  time with  drugs  and crime?”. Faced with these “doubts”, it is enough only to keep track of the daily life of this artist. More than five years ago he went, at least once a week to do several tasks in La Boca, a beautiful but very poor  neighborhood  of the city. Since there are no artistic subjects in schools throughout that humble area, Pisca began giving solidarity art workshops. But her vocation led her to more and, today, she has a very strong human bond with the neighborhood. He often shares meals and social meetings with the families of La Boca.

The recommendation we leave you is that, if you are motivated by a selfless  love  story like Gabriela's, do not hesitate to get going. I'm sure on the other side of the world, or on the way around your house,  there's someone your hands can do a lot of good to.

In Marcos Juarez they're saying...