Home People Stories of people Around the world in a wheelchair

We tell you the story of a brave adventurer: Candelaria is in a situation of disability and has already toured more than 20 countries. Because nothing stops a traveling soul. 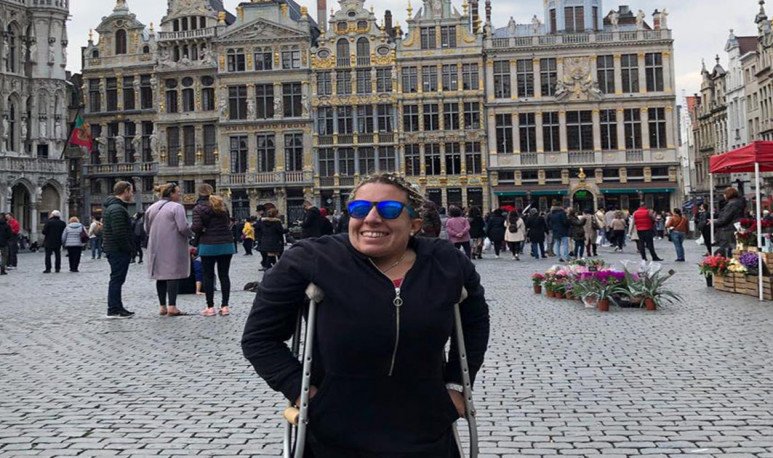 Because to go around the world it only takes courage and desire,  Candelaria Sturniolo  shows it.This Cordovan came to the world with some  motor difficulties and genetic abnormalities  that led her doctors to diagnose her only  48 hours of life  .However, the little, newcomer, had the strength to cope with all the difficulties and went ahead. With the  impulse of a  traveling soul   and the  strength of adversity.

Loading his backpack with his diagnosis, he began walking on crutches when he was only 7 years old. This led to the development of  admirable trust  and a  state of independence.  Cande says that, in his adolescence, he already felt completely autonomous. Today, she is 31 years old with a degree in Nutrition and toured more than twenty countries. He went from having a life expectancy of 48 hours to having the way of life we all want. This  tireless traveller  goes everywhere with her title, wheelchair, and crutches that help her  explore amazing places.

” There is no need to have taboo regarding  disability . I was born with a rare malformation, sacral agenesis (the absence of the sacrum bone that is the end of the spine) and that caused me not to develop my legs. That's why I need to travel in a wheelchair and/or crutches,” says Cande to the media. However, its diagnosis does not define it. What defines his story is  courage and thirst for knowledge.

Throughout her career as an inveterniate traveller,  she already visited 20 countries  and several  major cities.  Cande has  thousands of postcards  with incredible landscapes that have her as the protagonist. But that's not all. This graduate is responsible for spreading her story through the networks. This makes the audience that follows it can aim high. In your account,  @can_world , share data about your destinations and photos of your experiences. In addition, it produces podcasts and different content about disability. Cande is an adventurer to whom no obstacle prevents her from  going forward.

The beginning of an endless journey

When he talks about his life story, he emphasizes that his family became a fundamental pillar, as they were the  engine of his search.  She never felt overprotection or any attitude that would lead her back, but quite the opposite. In his upbringing and with his family ties, he was able to find that fuel that would serve to  travel thousands of  destinations .  In fact, his first trip happened in adolescence with his father and grandparents. At the age of fifteen he traveled to Cuba: it was a holiday in which they met  Havana, Varadero and Cayo Guillermo.  It was a  hinged moment  of his life: on that trip he discovered that he wanted to continue to know places. But I had to wait a little longer to achieve full independence.

After several years of study, he was presented with  the perfect opportunity.  It was while he was studying English  in  Wimbledon, United Kingdom, when he decided to cross the puddle to study English in Wimbledon, United Kingdom. And there he went. Without any external assistance, only  her and her desire to  study, learn languages and learn new cultures.

Thailand, Belgium, Holland, France, Italy and Monaco are some of the countries that Cande visited. He even came to the  2018 World Cup in Russia,  to encourage  the celestial and white of his heart .Since  his football soul  is painted with the colors of the Cordovan pirate, lover of Club Atletico Belgrano, Cande goes to the court and adds to watch each match.

Among all the cities he visited,  his favorite are Barcelona and New York.  Capitals that have all the accessibility factors that enable persons with disabilities to have access  to all rights  . Because even if we believe otherwise, people with disabilities  are not a minority.  In our country, for example, according to the National Institute of Statistics and Census (INDEC),  10.2 per cent of the population has some kind of disability,  or about  4 million people  .That is why it is vitally important that the tourism agenda of different countries be crossed from a broader perspective. Building  spaces with  accessibility   for all potential visitors. It is in this area that Cande's work, from her experience, becomes a reality. La Cordobesa  is dedicated to traveling  and  promoting accessible tourism.