Home People Stories of people An unexpected and emotional gift

José “Tono” Pérez's friends gave him a gift that made the whole Rio Gallegos thrill. 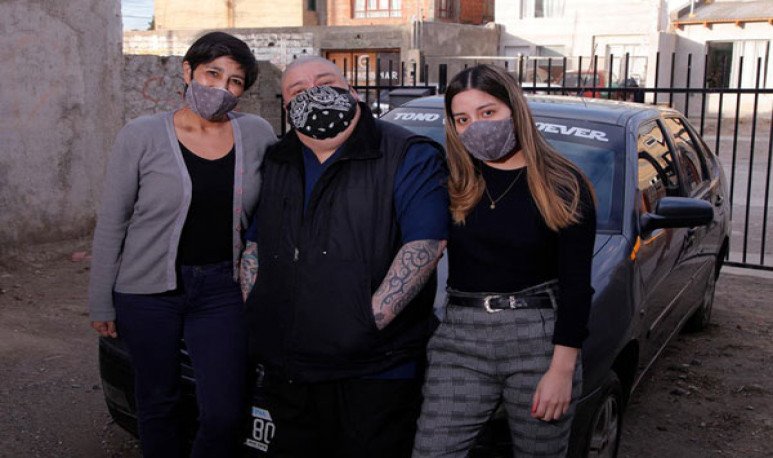 José “Tono” Pérez is a 48-year-old nurse from  Río Gallegos  . Thirty years ago he graduated from the Salesian School and, in mid-September, his colleagues and friends from the 90s litter gave him a gift that thrilled everyone in the capital of Santacruceña.

This year, at the 30th anniversary of the departure, they had decided to hold a party to remember and remember old days, but the arrival and advance of the  coronavirus  throughout the country cut off the celebration. However, Pérez's companions decided to do a redirect of what they had gathered for the party and give him a car to “Tono”, which he had never had and because of his work he had to walk to work in the low temperatures of  crude oil  Patagonian   winter  .

José has hypertension problems, he has been working at the Regional Hospital of Río Gallegos for 21 years and his commitment to the community led him to continue working despite being the group of “exceptuados”.  He even worked in the  COVID-19 sector  in nosocomio and contracted the disease. But he continues to steadily give his best to keep taking care of the neighbors. “I'm not going to abandon at this moment when they need us most,” he said.

That vocation, coupled with his honesty and humility, made his friends have the idea of giving “Tono” his first car . They say that his group was the only one he didn't have. His parents, who were very humble, had not had the chance either. The idea came from one of his companions who is currently a remiser and, on the cold nights of Río Gallegos, he has seen him walk the 25 blocks that separate his home from the health center, so he offered to approach him when he could.

So, instead of gathering silver to hold the party for the 30 years of graduation, they decided to do it to buy a 2006 VW Polo so that Jose can move more comfortable.

His friends say that, before giving it to him, they restored it, changed his seats and made him the engine again. They added stickers alluding to Star Wars and on the front they put the inscription “Tone whosoever”.

For months they were handled stealthily in order to make the gift to Jose, but this contracted coronavirus in August and the delivery had to be postponed until he recovered. After beating COVID-19, September 20 was the big day.

Perez didn't suspect anything. His friends told him they would accompany him to endure him because local media would interview him for his work as a nurse in the context of the pandemic. However, instead of a journalistic mobile, a caravan with horns cut off at about three o'clock in the afternoon the tranquility of the Sunday nap at his home in the Gregores district of Río Gallegos.

There came his companions from the Salesian to surprise “Tono”, his wife and his two children, who were excited by the gesture of the boys. They were joined by some curious neighbors, who wanted to know what was going on the front of Joseph's house.

Friends wanted to give a caress to the soul, recognize their friendship and so important work in hard times . The cry of emotion invaded everyone present. You will no longer suffer the cold when you go to the hospital at ten in the evening and return at six in the morning.

“Now it's my turn to learn how to drive,” said José, who recalled that this is the first time he has a car. The news toured the city and there were people who offered to give driving lessons to “Tono” and accompany him to get the driver's record.

When bad news floods all spaces, it is always good to publicize good deeds and emotional moments, and spread so that, in times of pandemic, what is spread is solidarity and the value of friendship.