Home People Stories of people A woman in astronomy

Astronomy looks like a man's thing. Yelem breaks with that myth and, as a woman, brings science to those who are less likely.

Maria Yelem Jorge is a housewife, Sofia's mom, merchant in a small design shop and student of Faculty in Physics. In addition,   works ad honorem   at the Astronomical Observatory of the City of Santa Fe (CODE). His passion for astronomy has always come. Yelem bought magazines and watched how much documentary or film about the stars he had circled. But his current history of laburo to full in this field began “about three years ago, when one day I said at home that it would be nice to go see the moon on a telescope. We went to CODE and I was fascinated.” Yelem became a member of the observatory, began to go more often and took courses, attending seminars, congresses and trainings. Today, she is the secretary of the institution   and carries out several projects, aimed at outreach   and the idea of bringing these sciences around the world 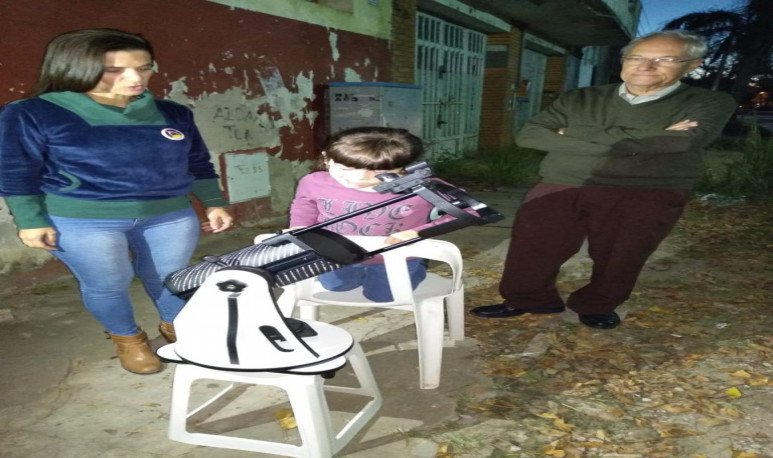 Along with other collaborators of the observatory, Yelem carries out two projects of great social and educational value. On the one hand,   The sky of my neighborhood   , astronomy workshop for children and adolescents. “It is an itinerant workshop that moves to the neighborhoods of the city. With this you can reach astronomy to those sectors of society that do not have access to talks, courses and workshops.   Many guys never saw a telescope   , so it's a really valuable experience.”

The other initiative is called   CODE Mobile   . “Schools ask for it and we visit them. We bring to educational institutions videos and talks   to start the boys on astronomical issues   ”.

Being a mother, working and studying

The   Yelem's fascination with astronomy   It took her to begin, this year, the faculty in physics. He made that decision after learning that this field of knowledge is intimately linked to the study of the cosmos. “It is not the same to study at 20 as at 43. But when you do what you like, you put a lot of passion.”   The challenge is big   when such a career must be started while still being the mother of a girl, merchant and housewife.

When you hear those dinosaurs say that science is a thing of men, tell this story, that of Yelem, or that of any of the thousands of women who do not give up their passion, but empower it and share it with others.

The streets of cobblestone

Football and politics in the 1940s

Talent at the service of the pandemic

From Cordoba to Japan