Home People Stories of people A Ukrainian, protagonist of an incredible love story

Viktor is a Ukrainian businessman who made news when he was found in the trunk of a car. But love was behind this crazy story. 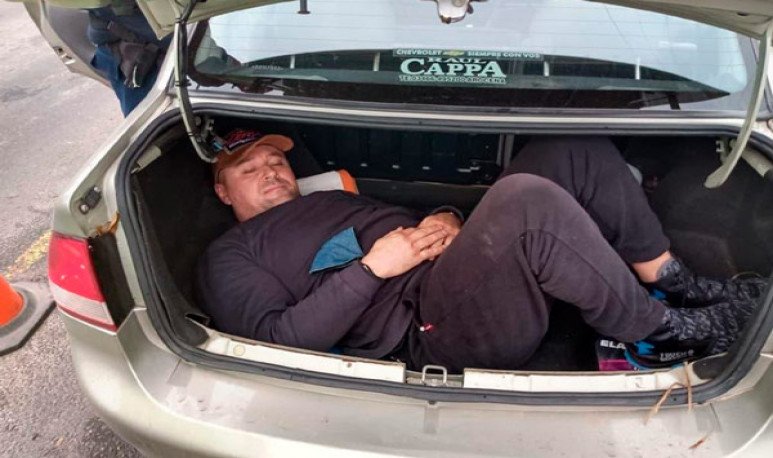 This love story is quite different from the ones we usually imagine. Last year, one of those  half-bizarre police officers circulated on the networks.  They found a Ukrainian in the trunk of a Santafesino businessman.

It was Viktor Melnyk, who was found in this suspicious situation, at the provincial boundary that separates Corrientes from Entre Rios. Without a passport, the first thing that came to know about this 47-year-old Ukrainian is that he was a soldier. Then, he was part of a Spanish military civic group called Reales Tercios and was  desperate to reach Rosario.

With that data, there were many speculations about what Rosario was coming to do. But reality surpassed every possible guess. Viktor  did not tire of tirelessly repeating to everyone that his daughter was about to be born  and he had to arrive on time.

So, at 47, Viktor Melnyk lived a real odyssey. A story that became known for his photo inside the chest of a Chevrolet Corsa, but began much earlier.

Says this Ukrainian that, at the beginning of last year,  they decided, with his wife, to leave Brazil, where they were . She traveled to Buenos Aires and he went to Paraguay on business. It's just that Viktor is not a soldier, he's an entrepreneur. He said that, at the age of 18 he had compulsory military service in his country and between 1994 and 2000 he had formed a special group dedicated to security, but was currently engaged in business. He is a representative of a  Spanish  company that is dedicated to water purification and wants to settle in the region.

On one of her trips to Latin America, she met a young Rosarina, fell in love and she began to travel with him. While living in Brazil,  Romina became pregnant and Viktor was going to be a father for the first time. Everything was going well until the pandemic came up.

When, in  cariocas lands, they found out that in the clinic in which it was attended there began to be cases of coronavirus, the thing was complicated. She's asthmatic, they got scared and decided to leave that country, and that's how the young woman returned to Argentina. His goal was to have a medical checkup in Buenos Aires and then settle in Rosario. For his part, Viktor traveled to Paraguay. He had scheduled a meeting with government officials and then would arrive in his wife's hometown to wait for the birth of his daughter.

But  the virus spread faster than expected and complicated family planning.   From there the odyssey began to meet again.

The first few months, they took it peacefully. While waiting for the borders to be opened again, diplomatic efforts began to authorize the Ukrainian to enter the country. Viktor wrote to the Ukrainian embassy asking for help. But the only solution they gave him was to repatriate him to his country.

After three months, Romina's mother got an authorization to look for her in Buenos Aires and take her back to Rosario. Already with his wife on the shelter of his mother-in-law,  Viktor began to work on how to reconnect with them .

How did the Ukrainian  appear  in the trunk of a Santafesino car?

Viktor's wife's pregnancy was progressing. The Ukrainian  needed to do something before his daughter was born . Because of his religion (  Orthodox Christian), he did not want to be a father without being married. Of course, it was all agreed with his girlfriend to do that “procedure.”

Among attempts to enter Argentina, the Ukrainian  hired a private plane . In Paraguay, he was told that he could leave the country without problems, but when they contacted Rosario airport to request that they authorize their arrival, they were told no.

Rosario told him that, being a foreigner and not having residence in the country, the only way to enter was that he will process permits at the Argentine Embassy that explained that his wife was about to give birth.  But the embassy was closed and they weren't answering the emails.

Viktor counted the time and did not give him the days to do those formalities and arrive before his daughter's birth. Given this situation,  he decided to take a taxi  and go to Encarnación, a city located on the Paraguayan border with Argentina.

He stayed in a hotel for three days,  looking for ways to cross the bridge that separates one country from the other , until a taxi driver from the area recommended that he approach and talk to fishermen. He told him that, every month, about 10,000 people cross in barges to collect a profit from Argentina. He arranged with these people. Already on the Argentine side, the protagonist of this odyssey took a taxi that took him about 100 kilometers south-west.  He was getting closer to remeeting his family . But  fate  still had another obstacle to put in this love story.

At one point, the taxi stops and the driver tells Viktor that he  does not have permission to continue driving. He leaves him on the route...

While he was waiting for someone to encourage him to take him, a message on his cell phone warned him that  his wife had broken bag  and that at sunset he would enter the operating room. His despair becomes notorious and at that time  a Santafesino businessman appeared on stage  who, from his car, sees the Ukrainian and decides to stop. Viktor tells him his story and the Santafesino  agrees to take him to Santa Fe . They crossed about 300 kilometers, 30 controls, viruses and police...

When there were still 350 kilometers to arrive,  his wife entered the hospital.   To save himself more controls, the desperate future dad proposed his driver to get into the trunk of the car.

From there, the known story. Viktor  is discovered in the trunk of the car .

The  officers  moved Viktor to La Paz police station, after two days later he was able to communicate with his wife and learned that his daughter was already born and was in neonatology.

In the federal court of Paraná, Viktor retold his story. The prosecutor explained that he was  detained for the violation of the isolation measures to  prevent the spread of the coronavirus, that he could go through his trial at liberty, but that before they needed the papers that could his identity and history.

With the help of a lawyer, this love story was coming to an end . The Ukrainian was able to justify everything and take a taxi from Paraná to Rosario.

In the main city of Santa Fe , he went to a flower shop in Rosario and asked for the largest and most beautiful flowers they have.   One bouquet was for his wife, another for his daughter, and a third for his mother-in-law. Minutes later, Viktor and his wife merged into intense  embrace . Of those that are seen in films that tell an exciting love story.