Home People Stories of people A race for life

Learn about the story of this young Jujujuño who ran 81 kilometers to ask that the femicides end in the province. 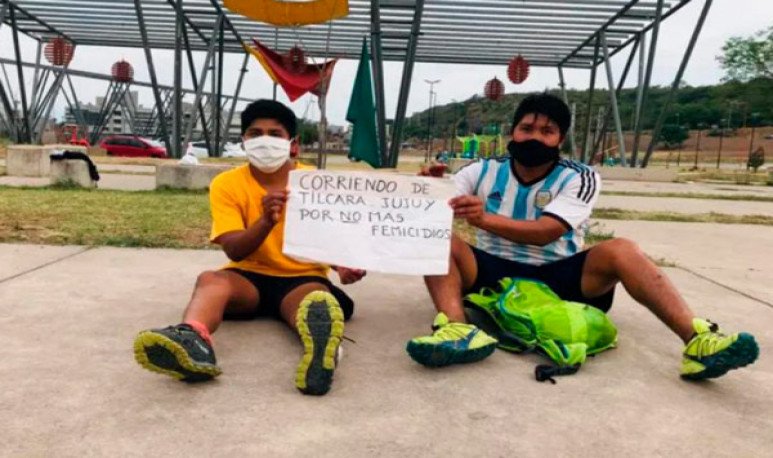 In 2020  Jujuy  suffered a hard blow to overcome. During September, four of the eight femicide victims accounted for by the country were Jujeñas. A number that generates serious concern in the province, which  saw doubling the number of crimes against  women  so far this year.  The latest cases occurred in the departments of Abra Pampa, Perico and Palpalá, and they turned on the alarms of an increasingly distressing situation.

At present, Jujuy province has laws and agencies that actively collaborate to prevent violence against women. However, the recent cases of Cesia Reinaga, Iara Rueda, Roxana Mazala and Gabriela Cruz indicate that, in spite of everything,  there are still naturalized violence that are far from being eradicated.

Moved by this harsh reality ,  Javier Pérez,  21, set out to send a message of encouragement.  He ran from Tilcara to San Salvador de Jujuy doing 81 kilometers  with a goal of asking for the end of the femicides in Jujuy. Javier is passionate about trail running, and for this he wanted to use this sport as the means to  make visible a problem  that saw its worst facet during social isolation.

One day he was in the lagoons of Tilcara and thought it would be a good idea to carry out  this feat to keep alive the memory of those who are no longer and ask that violence towards the   women . In that spirit he told his plan to the trail running group with which he trains and immediately received the approval of his peers, who encouraged and encouraged him to carry out his run through life.

That was how, on a Sunday at the end of October, Javier Perez left his home at 6 am in the town of Tilcara and embarked on a trip. This road was different, it carried with it a slogan that would make him not stop and reach the finish line. He was accompanied by a whole group to Purmamarca, there he found another young man who stood in solidarity for the cause and did not hesitate to join the challenge accompanying Javier to the capital of the province.

After eleven hours, Javier arrived with his team to Ciudad Cultural and were greeted with applause and cries of support by a group of people who were eager to wait for them. On the way other people were added and the race was completed with 10 participants from different places.

Javier revealed in dialogue with local media that, in the face of the episodes and the latest deaths recorded by the province, “something had to be done.”  While I was walking the 83 kilometers I thought of all those women, those voices that were gone. That was his impulse, the desire for justice that made him could unite Tilcara and San Salvador with their feet.He didn't have much time to prepare a banner, but he improvised with a few school sheets a sign he held when he reached the finish line: “Running Tilcara-Jujuy for NO more femicide.”

Among those who participated was the presence of Mariela Scramonsin, a solidarity runner who joined the run in Lozano and made an important reflection.For Scramonsin,  the event was an important sign of commitment because the sacrifice made by the 21-year-old invited society to reflect  and calls on the authorities to take necessary measures to end the femicide.