Home People Stories of people A life forged in the mountains

Alfredo is a mountain blacksmith, in Mendoza. Salamanders and plow discs are evidence of a lifetime forged in the mountain. 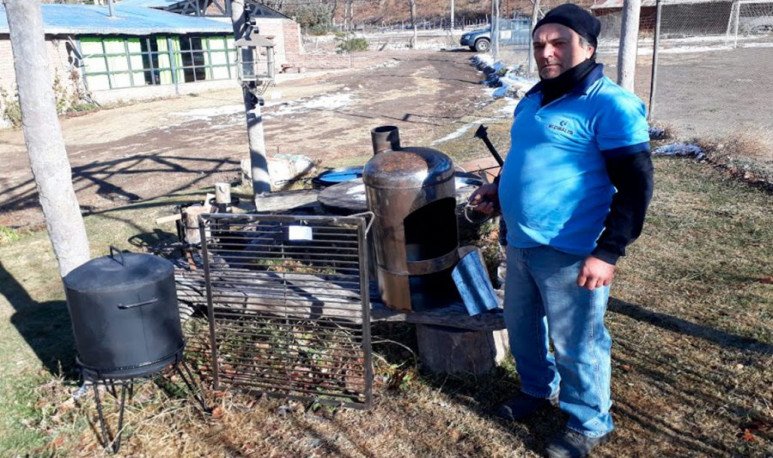 We contacted Alfredo from an interesting   help program for entrepreneurs   regional initiatives promoted by the Government of Mendoza. In the context of the quarantine, a   system for the removal and home delivery of merchandise   was made available to producers farthest from the city. There are the products of Alfredo, a blacksmith who has a lifetime forged in the   mountain   .

Road to Tupungato, at the beginning of   Route 89   , our interviewee's house is located. But, in addition to home, there is a shed, a football pitch and even a corral with animals. Evidence that more than one   generation   family has inhabited that land. “My family came here in the 1950s. And here is my generation too, in Las Vegas,” describes the blacksmith who also talks about his mother, grandmother and great-grandmother.

And while Alfredo was born among the mountains, he studied secondary school in the City:   “I studied in schools   Mendoza   but every while I came here because my parents were there.” And so much going to Las Vegas, he met a woman who ended up being his wife, doing a lifetime forged on the mountain: “I married a native here and we stayed to live.”

“At first I devoted myself to the   construction   and the blacksmith,” says Alfredo, who currently, more than a blacksmith, is a craftsman:”   But now I'm only in the artistic blacksmith. I like doing things with my hands. I like to create them and make them, but I have a hard time selling them.”

It's just like Frankenstein with his monster, it happens to Alfredo that   it is hard to part with his creations   . Because of the work, effort, work and time involved, their products manage to fall in love, and it is very difficult to put a price on it and sell them. ”   I find it hard to sell them because I believe them, and it's hard for me to sell them and get rid of them.   . They ask me the price of something, but that's relative. One can ask for a number, but that is worth more, or less, depending on how much one wants, or the affection you have for that article.”

Everything related to wrought iron is part of Alfredo's catalogue.     Discs for cooking   , pots, grills, tools, salamanders and iron utensils in general are some of his creations   . We know because he had everything neat on a table in the courtyard of his house.

The products have different destinations, although, for now, within Mendoza:”   I sell for the rest of the province. We send it by order, where I only pay 30%   and the rest is put by the Government,” says Alfredo, referring to the program that has been launched to alleviate the effects of the quarantine.

Potrerillos   has a wide variety of natural and cultural riches. Within them there is a universe of artisans and entrepreneurs of the social economy who produce distinctive items from the region.   At the same time, they are the main source of their income and cultural, social and economic pillars in the area. They arrive in urban areas of Mendoza and other Argentine provinces by door to door transport.   Even several receive electronic payment.

Notebooks with identity of mountain, salamanders and   plow discs   , toys and goldsmiths, ceramics with author's designs, fabrics and   cheeses   flavored with Andean herbs integrate the offer. All, created in the middle of the mountain and by the hands of Mendoza.

The Government offers a discount of   up to 75 per cent in freight cost   and transfers to allow producers to arrive with their goods to different parts of Mendoza and the country.

A chocolate shop and a lot of quality of life

In Cordoba there is also bad wave

Give supply, give a coarse or give avasto?