Home People Stories of people A high length of Cordovan

We tell you the story of one of the heirs of Aristotle Onassis, a Cordovan who saw no weight of ancestral wealth. 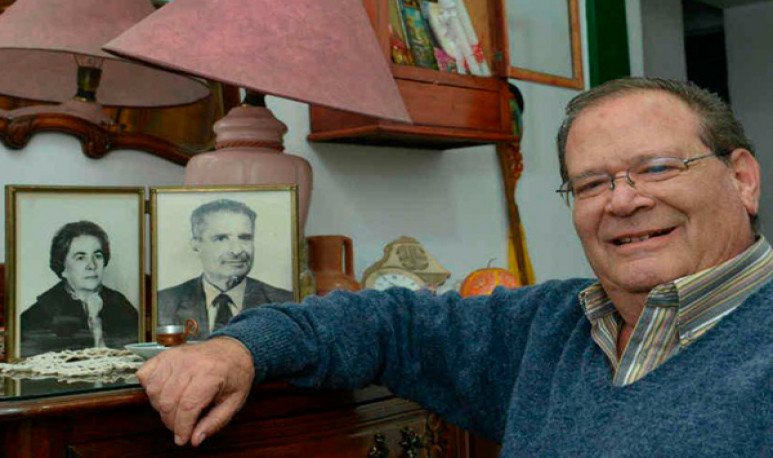 Aristotle Socrates Onassis (1906 —1975)  is defined by the most famous online encyclopedia as “ the most famous Greek tycoon in the shipping industry of the 20th century and the richest man in the world at his time.”  This man  came to Argentina   escaping World War I , after overcoming Turkish persecution. He emigrated to Buenos Aires and newcomer worked in several jobs, including as a  waiter and office worker.  Even stabilizing because of its ease for business. He began  to export tobacco  and became the  billionaire owner of an unprecedented shipping fleet  .

But in this note we will talk about one of his direct relatives, who as  heir did not have anything.  However,  he shares a very harsh story of wars, exiles and famines with the famous Aristotle.  This is Jaralampos, who is the son of a brother cousin of the Greek tycoon. Like his billionaire uncle,  Jaralapos was born in Greece.  And, in the midst of a war that took thousands of lives every day, he went into exile from Thessaloniki to Argentina along with his family. At only 7 years old,  Jaralapos crossed the world in search of a new opportunity for him, for his sister Penelope and his parents Hercules and Helena . It was the year 1957 and the Onassis family was looking for some stability in the meantime chaos.

In search of calm

“ After World War II,  Greece experienced  a civil war  , which was more cruel than the war itself. The Greeks fought to see if they were going to be communists or not.  I was born in that context.  We were very poor, and my dad contacted Aristotle for help. Then we came to Argentina, with the promise of work and a better future,” says  Jaralapos,  the Cordovan by adoption who belongs to one of the most recognized lines.

In principle,  they settled in Salta , and then move towards the center of the country, for labor issues.Jaralampos's father had a  job offer from his cousin brother.  For 12 years he held a position at  Frutos Argentinos SRL, Aristotle's tobacco collection company.  Everything was getting better. Compared to the situation in Greece , Villa Dolores  was a paradise.   They even managed to enlarge the family: Sergio Onassis, the younger brother of Jaralampos and Penelope was born.

Jaralampos studied  Business Administration in the city of Cordoba  and made a career at Volkswagen for a few years. But soon he decided to travel with his sister  to New York.  In search of new horizons, new experiences and with the support of Uncle Aristotle, who was waiting for Jaralampos to work in different positions. At that time the tycoon's company  had expanded and acquired the powerful Olympic Airlines airline.   “ Penelope was biochemistry. In the United States he did two more careers: geology and biology. He began working as an insurance manager at the company. I, on the other hand, went through all sectors. Aristotle wanted me to make a career,” says Jaralampos.

After the adventures in New York,  it all began to get complicated for this branch of the Onassis family. On the one hand, international competition caused Aristotle's fleet to swing. On the other hand, Jaralampos's father was plunged into a  lethal disease.  Leukemia took him, after several surgical interventions. In that interim, Helena de Onassis was diagnosed with breast cancer.  The two die in the United States,  where they had gone to carry out their treatments, with Aristotle's approval. Jaralampos returns to Villa Dolores to overcome his duels, regretting not being able to move the bodies of his parents. Meanwhile, her sister stays in New York and dies almost fifteen years later, at her age 40.

With his return to Cordoba, Jaralampo was almost forced to undertake.  He needed to live on something, and he only had the last savings left, which he used to install a kiosk, a project that failed.

“ What was most sold were the tutucas.  In little pieces. Then I said,  'I'm going to make tutucas'.  I started investigating how they were done and got a 1000 square meter shed. And it was a lot harder than I imagined, because tutucas are made with an explosion. That is: a pressure cooker, you will put corn on it, then the lid so that it does not lose it. And when it reaches 15 kg of pressure (taken by a pressure gauge), you release the lid to it.  There he makes an explosion . But the lid you released hit something, so at first I lived breaking machines,”  he tells the media.

And so, Jaralapos without his uncle's capital, but with his ingenuity and ability for business, he managed to succeed.  Its brand “Kalimera” is located in the San Pedro Nolasco neighborhood and employs 11 people.  Currently, the direct relative of the great Greek tycoon is  70 years old and three daughters.  Your company is your legacy, and it remembers your roots daily.