Home People Stories of people A great help to get home

Ivana Fernández was stranded in Tucuman due to the pandemic. I got to know the story of the young woman and the help that came from Australia on one condition. Which one? 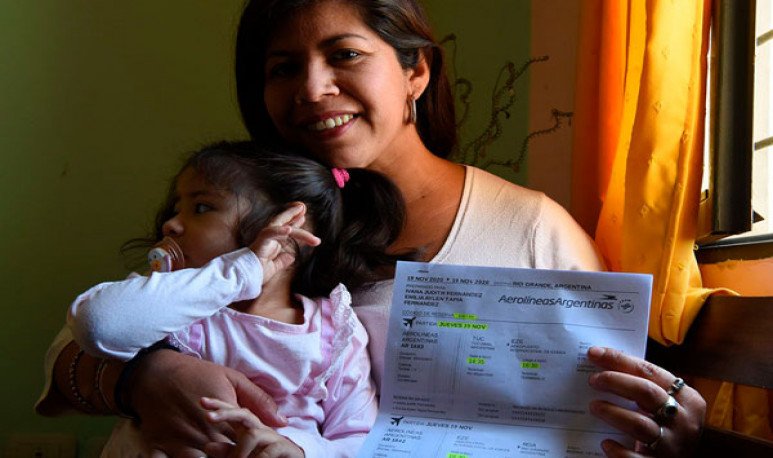 In March,  Ivana Fernández  was stranded in Tucumán due to the quarantine structure that crossed the province, which prevented her from returning to her home in Tierra del Fuego. The pandemic held her with her baby, with whom she had traveled to  Tucumán , leaving her family in the south (her husband and 4 children).Once the measures were relaxed, Ivana had no money to return to her home and a person in Australia, in a spirit of solidarity, helped her.

When she heard about this young woman's case, this person broke into tears. “I broke. I have a corneal transplanted sister and another sister who had a brain tumor. Both were saved by the people, but not the people who have money, they were saved by the help of those who find it hard to earn the money,” said  Cecilia Vieceli . For this reason, he deposited what he could and sent $20,000 so that Ivana could at least buy a plane ticket from which he needed two, as he was also charged for his little son's seat.

Cecilia had decided to travel to  Australia  to change a little air and somehow “heal his wounds”, as she had lost her sister (died of breast cancer three years ago).and also his grandmother and father died.

He traveled with some friends, but while in Melbourne they were surprised by the  pandemic and, about five months ago, moved to Sydney to get a job “at least until I finished my leave in my work, which lasts a year,” he said. Cecilia is a police officer in the city of Cordoba.

Touched by Ivana's despair who was stranded in Tucuman without being able to return home, Cecilia decided to help her on a very noble condition. “I give you the deposit, but on one condition: that you also help someone else,” said the young woman. He also said, “It's not a chain of favors, if I told him that it was because people have to believe in others again. I read in that note many comments, but not a solution. I didn't know Ivana, I didn't know whether it was true or not what happened to her. But I think we have to trust others again, to help. And, as I saw that that didn't happen, I called her,” she added.

Then, Ivana commented that she already has the two passages to return to Tierra del Fuego. “A lot of people called the phones that appeared in the note. Among them a lawyer who could not get Aerolineas Argentinas to recognize me the ticket and a young man who deposited $500 to me and wanted to organize a collection that was not necessary in the end. But in the middle there was also legislator  Federico Masso . He summoned me to his office, and when I saw him, I recognized him: 'I know you. You helped me make a room for my son 10 years ago when he was detected for cancer. We lived in a little house without doors or windows in the neighborhood Juan XXIII La Bombilla (Tucumán) ', I reminded him. He smiled and told me he was going to help me again and bought both tickets with his credit card. I got so excited that I started crying,” she said.

On November 10,  Ivana Fernández  will be able to return to her province.Regarding his home, he said that he lives “in a square with a sleigh, it is made of sheet metal and, inside, durlock. He gets up and moves. We rent the land alone, but the contract says that if the rent is not paid in three months, the owner of the land gets the box,” he said. As the time that the young woman comments has passed, she plans to take up the money they have donated to save her cell, and also arrive in time to accompany her son who has to be surgically operated.

Finally, Cecilia, this person who has shown and who gives  hope  to believe that there are good and caring people, will continue for a while in Australia. May his soul wounds heal soon and many become infected with his spirit of solidarity.