Alberto Ávila is a man whose passion has always been the railways since childhood. Today he builds scale models for kids to play. 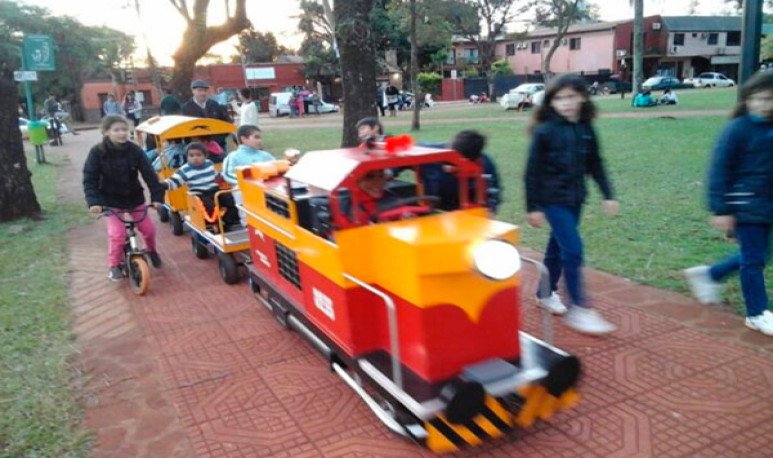 We all know what it means when someone says  “choo-chu.”  Sometimes, it's one of the  first expressions  a  child  can say.  It's just that in  childhood games there's  never a lack of trains and locomotives . We fought with our friends to decide who would handle them and who would be the passenger. So we would put on the first hat we could find and pretend to be drivers who shouted,  “Everyone on board! ”. That was the beginning of an  adventure  that took us to the  most pleasant and crazy trips . It must be the same  passion  that led Alberto to to undertake a tender project so that the little ones could experience .

His fascination  arose  during his  first years  of life, while  he lived  in  the town of Las Marías  . His house was located behind tracks that allowed him to watch the railways regularly. But then he had to move to another  city  called  Governor Virasoro  , which gave him a big surprise. This time his home was  100 meters away from  the tracks again, so  he was able to rediscover his fanaticism  . So, every time he listened to the whistle, he went out excited to enjoy what was a  great moment for him.

Therefore, we could say that  his greatest memories  have to do with this  mode of transport  . It is that it represents an  inherited profession  that always carried in the  blood , because  his grandfather was a railroad  . In view of this, Alberto reported that his  longing  since a young age  was to have a small-scale train  . However,  they were too expensive  to be able to buy them. A  situation that could be reversed only in 2013 , at the age of 36. That's when  he decided  to take momentum and set up  his own little trait  to walk the kids.

On the platform of desires

From there,  a hobby became a contribution to the happiness of the community . Man began to  manufacture   small models  that  feature all the details of the real big railway machines  . In addition,  it makes them ride   on handcrafted miniature railway circuits  . Four years from that time, he was authorized to use his creations in  Plaza Libertad  in the town of Virasoro. Everything is possible thanks to the garment workshop that he installed in his house especially to be able to carry out the project. Where cars and electric locomotives were coming out and exploding.

The idea was launched as a  hobby . In fact,  he does not receive any remuneration in return , nor does he rent the machines. All the materials and tools you use for manufacturing are on your own. It happens that the man is also engaged in other activities, which are profitable for him, such as owning a local radio. However, his  pride is concentrated  in the project he carries out with  trains  . He  defines  it as  something unique  , because  in Argentina there is no other person  engaged in large-scale manufacturing. Which is why, according to him, he draws a lot of attention.

Everyone wants a little walk

Over time, Alberto joined several Facebook groups with people who did the same or belonged to the railway industry. So, little by little,  his work began to become known  and many people contacted him to order  his creations for different parts of the country  . Some of them were  Buenos Aires, Santiago del Estero, Santa Fe and even Mexico . Now, the question that interests us most is, will there be little place for the big ones?

“Everyone has some taste, hobby or vice in which they put their money”