In the midst of a pandemic and extensive quarantine, this story shows us that it is never too late to learn new things. We tell you the story of the 7-decade-long flag bearer. 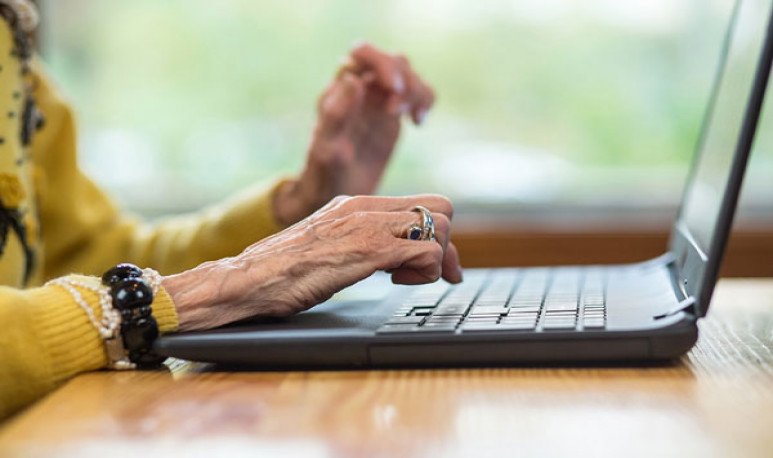 It is the story of Elva Conti who, at age 78, faces a global pandemic. Full of life and enthusiasm,  Elva continues to keep her classes online. To continue learning and enjoy. This woman from Cordoba seeks  to overcome herself a little more every day.  Her family supports her and she gives her forward. He lives in the  town of Isla Verde  and from there receives all the necessary educational content. This small town is located in the Marcos Juarez department and consists of 4390 inhabitants according to the Index, 2010.It is 311 km from the city of Cordoba and its  main economic activities  are livestock and agriculture.  In the middle of a rural area, Elva is committed to learning more every day.

Between joke and joke...

He tells that his school adventures began at the school event of one of his grandchildren.  As a joke,  Elva told the little boy that she would attend classes next year. It was just a joke, but  as the saying goes ,  “between joke and joke, the truth comes out,”  and this joke soon came true.  Elva resumed high school in 2018 , because one of the school's secretaries scored her. By pure chance. But it went on and on.

To this day, he reached the third year and does not plan to give arm to twist. From the beginning of the pandemic  everything changed.  Elva  had to learn  not only the contents of the educational curriculum, but also new media.  When he was 78 years old, he adapted to these modern times of teaching and pedagogy: he did it.  Elva never had a computer, and she doesn't need it either. He currently manages with  his notebook and pen,  doing all the work by freehand . With effort and dedication, this woman keeps her studies up to date  and sets out to learn more about the world. Her grandchildren and family members help her adapt to virtuality, and support her to continue. However, Elva prefers not to bother them. She manages herself and takes care of her training.  She even got recognition for her performance as a student!

Currently,  she is the flag bearer of the province of Cordoba.   And it shows us that there are no  excuses to succeed. Elva had doubts about the beginning of the quarantine, as she suspected she would not be able to adapt to the new mode. However, her children and grandchildren convinced her to continue and pushed her not to abandon. Almost finishing the school year, Elva said that what costs her most is  mathematics.  Because it finds  many differences between the modalities of before and those of now.

Elva tells the older Elva to  “don't be afraid to go to school, because teachers help a lot.”  And the younger ones are told to “don't give up, go on. Because they have a future.” But Elva  is not of words,  he is of example.  His life story says much more than words can express . When he is 78, he does not give up and seeks to reach his school degree. Living new experiences and dedicating themselves to collecting new knowledge.

Today, he is the protagonist of the media in Cordoba.  Because his story shares us encouragement to continue learning through virtuality. Elva is an impetus for both older adults and young people. And that's why we thank you.  Big, Elva!