For them, “the love of the round does not distinguish social classes or gender.” In women's football, Mendoza has more than 600 federated players. 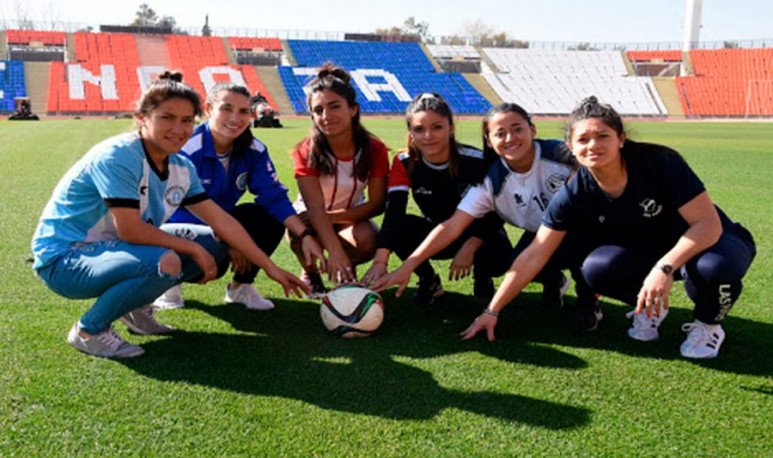 More and more girls are encouraged to participate in this sport.   Over the past four years, women's football captivated thousands of women from different latitudes,   a phenomenon that does not stop growing in all social strata.

To share a few hours in the   mendocino stadium   , were the professor of Physical Education, coordinator of Futsal Maipú and player of Godoy Cruz, Verónica Cabrera, and the   Women's First Division   of Gymnastics and Fencing, Ana Ontiveros.

Far from the sports rivalry of the clubs that are militating or because of a result,         the girls   agreed that “passion and sport go hand in hand, in our province there are many women who feel love for the shirt, leaving aside important meetings, birthdays and commitments, with the sole goal of playing a match”.

They are prepared more than 3 times a week, regardless of temperatures, distances or times and   sports conduct   that they carry forward is similar to professionals   . And what will be the importance of this sport that, in the case of Cabrera, 30 years old, has been enjoying the round for more than 20.

“There is great growth and participation of clubs, families, teachers, as well as players. We always have to improve to grow,” said the Tomba scorer.

Mendoza has more than   600 women federated and is the great hotbed of the interior when it comes to forming players   . Every weekend, in different departments of the province, championships are held   amateurs   where more than 15 teams participate per tournament, bringing together thousands of girls practicing the same sport.

But Veronica is not the only one, Ariadna Guizzea, 22, also practices this activity at the Club Deportivo Maipú and plays   football   more than 7 years ago.

”   Football for me is more than a sport, it is a passion, a way of life, which teaches me every day to overcome myself   , with highs and lows, but always accompanied by my team that ends up being my second family. There is nothing nicer than practicing this sport,” said the young nursing student.

After the recent   performance of the Argentine National Team   Women's Football at the World Championship in France 2019, scored a before and after in the history of our country.

“I think everything adds up, that, if the head of football grows, everything will bear fruit, there are many years that have been fighting to achieve what was achieved and I think that makes us more real. People went on to know women's football, to become a little more interested in what is done and hopefully we will continue this path so that in a few years the   players   more girls can fulfill the dream of so many big players,” said Napolitano (27), who is also a teacher of Physical Education.

Football fever also spread to Roggerone (22), player of Club Andes Talleres. ”   The World Cup was great and I'm very glad that it served to visualize the history of most of the   women         that we played football in this country,” said the Physical Education student.

”   It's good that footballers have a day to celebrate, but I think every day is a reason to celebrate.   . I celebrate it with the simple fact of going to play, train and dedicate myself to this,” said Ontiveros, an important reference of this discipline at the local, national and international level, since he played in the   Lupus   mendocino and also integrated the selected Mendoza and Argentinean.

The opinion of Mendoza women is unanimous and forceful: “Watching women playing football sounded like distant some years ago, but today the   revolution   female has arrived and is here to stay, with more strength and leaps and bounds, there are several young women struggling to fulfill their dreams.”

For Morales (26), “my biggest dream is that women's football continues to grow, that someday throughout the country become professional, that we have the respect we deserve. Also that each club has its inferiors, as they will be the future and perhaps manage to get one day everything that is currently being struggled.”

A sport that grows

Later, Giuliana Conte (23) explained:”   My dream is to see the girls come from school to a First Division, who   the clubs   have their inferior   and tournaments are organized for all divisions equally.”

In this regard he added that his enthusiasm “is that, in the future, the club Independiente Rivadavia can reach AFA, if it's not my turn, that the girls can enjoy it. My dream is always to remain linked to this club, as a fan, teacher and player, in the role that plays me.”

Finally, Giuliana Díaz (25), journalist and player of Deportivo Maipú, stressed that “the desire, effort and commitment that I see daily in each girl drive me to fight for them and for me. I want this sport to have the value it deserves, we're on the right track.”

”   Today we are all one,” he said, “so you get there, I want to help all the girls football players from the place that touches me. I can attest as   journalist   and player that this discipline unites more and more women and that everyone knows the great flow of talents that Mendoza has   , that they know about the good players we have and that they do not go unnoticed.”

“The message I can give to the most girls who love football and still don't practice it or just start is that they never lower their arms, that if they have any dreams they don't stop until they fulfill it and if anything I can help them, count on me.”