Emiliano Salas, the Nantes player sold to Cardiff, the boy who marked the history of the whole town. 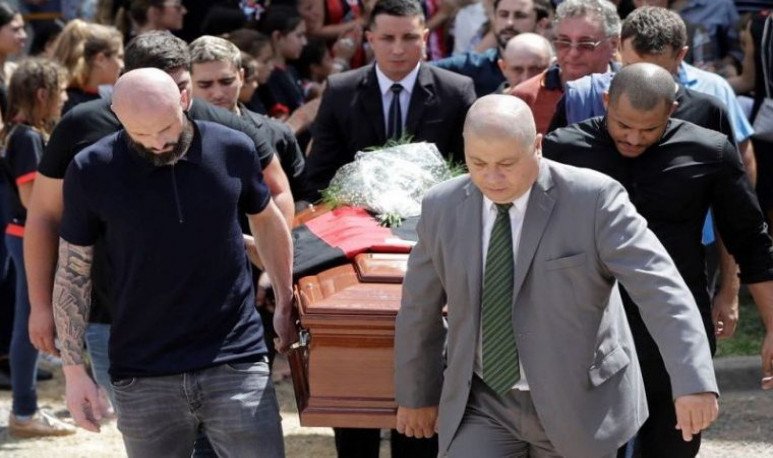 Family, friends, authorities and neighbors dismissed Emiliano Sala's remains. The Argentine footballer who died on January 21. In a plane crash while moving from Nantes (France) to Cardiff (Great Britain). It was a multitudinous funeral held at Club Atlético y Social San Martín in the city of Progreso in Santa Fe.

The ceremony began at 7 and ran until after 15. With the player's family next to the coffin -a drawer closed. As the neighbors and relatives approached to greet the “prodigal son” of the village. Just like the former striker was catalogued.

A flag hung in front of the club said, “You'll never walk alone.” While twenty crowns and two photos in gigantography of the striker decorated the living room.

“It's a shame this outcome, we're going to be a fighter.” He told Télam Nicolás Higuaín, Emiliano's representative from 2011 to 2017.

The entry of neighbors into the club was incessant. Many wore flowers and wreaths to fire the player. After greeting his family, they stayed taking mate outside, remembering anecdotes from the footballer's childhood.

Daniel Ribero, president of the San Martín club, said that future homages will be made to Sala. Because “we hold on to nice things, we remember Emiliano as a person.”
“ When this stage of pain passes we will be thinking about what to name in the club. It can be to the sports center or to the court. It is a humble tribute for how he has left us standing in front of the world,” he said.

Neil Warnock, the coach of Cardiff, the club Sala was going to pass after passing through Nantes on a historic sale of 17 million euros, traveled from England with CEO Ken Choo to fire the player.
“ Things like this don't happen very often. You can't understand the emotions that the family is going through. They're very close, as is the whole town. It was all very mobilizing. Now at least they can have a closure,” warnock assured. And he said he was able to exchange anecdotes about Emiliano with his mother to “slow down a little.”
“ We came to express our condolences. It's very good that we came and get to know the family and the whole community. We are happy to come and show our respect for Emiliano.” He assured Choo and avoided controversy about the responsibilities for the plane crash. “We leave the investigation to the authorities.”

In the vicinity of the club there was a quiet atmosphere despite the arrival of many international media. Under a strong security operation of the Santa Fe Police and a private company.

Martín Gatti, Emiliano Sala's cousin, said that “we have to investigate” the fall of the plane. That cost the footballer his life when he was traveling on January 21 from Nantes to Cardiff. Because “there were a lot of irregularities.” And he warned: “We're not going to get it back, but if there are responsible, they pay.”
“ Something strange there was. He was sent alone on a troubled plane, with an inexperienced pilot. They should have taken care of it more if it was the most important sale of Nantes in its history. They didn't take care of him.” He claimed a sorry Gatti, speaking to the press about the air accident.

Nacho, cousin of Emiliano's father and also from Cululú, the town where the player was born, after leaving with deep sadness from the funeral, said that “the family is very touched. But well, they're things of life.” “We didn't get to understand how this happened, we're sore,” he added.

The Piper PA-46 Malibu plane moving to Sala from Nantes to Cardiff disappeared on Monday 21 January as it crossed the English Channel.
Sala's body was recovered last week, while the pilot's body was not yet found.

The drawer with the remains of the footballer came from Great Britain. From Ezeiza airport, he was transferred in a van to Santa Fe. And then in the early morning towards Progreso, where the farewell took place today.
After a closing mass, the family and friends - led by footballers Nicolas Pallois and Diego Rolan - removed the drawer towards the hearse. Escorted by a cordon that the boys from the club formed to go to Santa Fe. Where the body cremation will be done in the Municipal Cemetery.

There was only applause that lasted several minutes. The crying of some neighbors and the exclamation of others, “Come on Emi!”. To fire the boy who marked the history of the town. Since Sala was so far the only professional player who left there. And it was an example of “humility and sacrifice,” as the progresinos recognized.