Home People Sports What is under the camp of the Monumental?

The works carried out to improve the playing field led to the discovery of some curiosities. 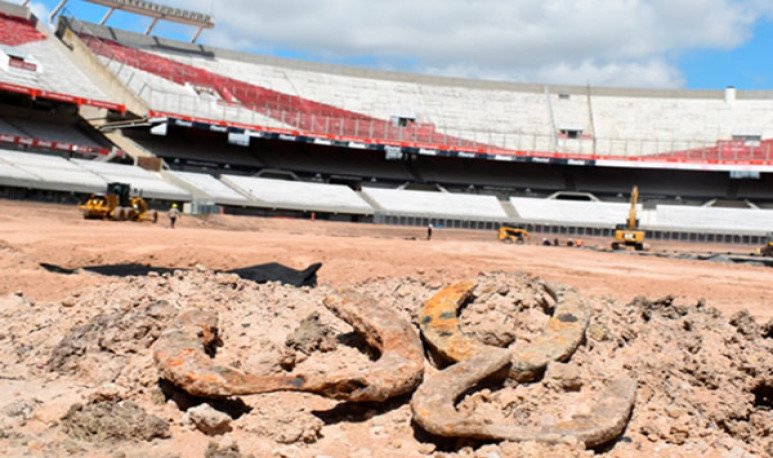 Have you ever wondered what will be under our cities?  Under our buildings, our houses, our cars, bridges, roads, parks. Progress was built on the basis of the ancient... but how long will there be left of the above? In the Antonio Vespucio Liberti stadium, better known as the  Monumental stadium, great matches and musical events take place. Beneath his playing field, however, were hidden bits of the history of the  City of Buenos Aires . And now they were exposed.

Taking advantage of the forced quarantine break,  River Plate  authorities launched a play that will transform the stadium into one of the best playing fields in all of South America.  During the excavations, several relics of past times came to light, which from the institution were responsible for making known.

With the title: “A discovery that tells the prehistory of our house”, the club published on its official website the curiosities found during the works. First, they found the  old drainage system  that was installed in the run-up to the World Cup in Argentina 1978. In addition, there was an irrigation system that had been disused.

But the most striking  finding  had to do with the previous use of the site:

On October 31, 1934, River acquired in exchange for 569,403 pesos the site on which, in less than four years, the largest stadium in the country would be inaugurated.

Emerged from a split between the members of the Hippodrome Argentino — today Hippodrome de Palermo — and also known as “Hippodrome de Belgrano”, the establishment promoted and presided over by General Francisco Bosch was inaugurated on August 14, 1887 and functioned in a active until 1911.

Closed the racetrack, it was used for some years to show the horses that ran in Palermo and from 1913 it hosted various social, cultural and sporting events until its demolition was determined in 1920.

This is how they found some  horse horseshoes from the old racetrack dating back to the beginning of the 20th century.  As they commented from the club, the U-shaped iron pieces became part of the historical collection of the River Museum.

The reason for the works

The works that are being carried out in the Monumental will partly change the appearance of the stadium.  The  Millionaire  will have a latest-generation lawn , in the style of those who have the main European teams. The idea is to lower the playing field by 1.9 meters, for which already more than five thousand dumps of land were removed. The works will cost approximately 177 million pesos.

The lawn will now have a hybrid system , since 5 percent will not be natural, which will solve the problem that was generated on days of storms due to poor water absorption. In this way, a new reinforced lawn is combined with an aeration mechanism, which will place the Monumental  among the best stadiums in the world.  This system will allow the court to have more hours of use than a traditional one. In addition, aeration technology will help the growth of a healthier and stronger grass, which will require less maintenance costs.

To achieve this goal,  the athletics track surrounding the playing field will be removed  . In addition, a single tunnel will be created, in the European style. In the future, there is the possibility of building new stands, which will increase the capacity of spectators.